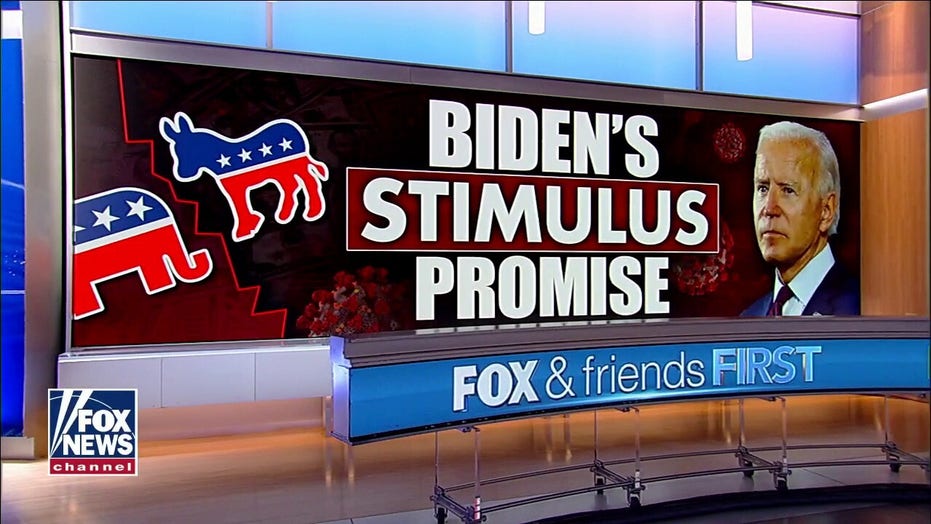 The Democratic Party's official Twitter account has sparked backlash Saturday after tweeting that President Biden will "build on the $600 down payment provided by Congress last year, sending an additional $1,400 to households across America, totaling direct payments to $2,000 per person."

Critics of the tweet claim it contradicts the promise made by Biden that a separate, $2,000 stimulus check would "go out the door immediately to help people who are in real trouble" if Georgia voters cast their ballots for the newly-elected Democratic Sens. Jon Ossoff and Raphael Warnock during the state runoff elections earlier this month.

Some replied directly to the tweet, including one user who accused the party and Biden of "gaslighting the very people who trusted & voted for you" while another chimed in, writing "Good luck in the midterms with this incredible strategy."

Others expressed their anger for the alleged pivot using #BidenLied, including podcast host Ryan Knight.

According to Biden's $1.9 trillion 'American Rescue Plan' unveiled last week, individuals eligible for the one-time $1400 stimulus check will include adult dependents who were previously excluded from receiving the money, including college students and individuals with disabilities.

It will also include households with mixed immigration statuses that were left out of the original $1,200 stimulus payment approved under the CARES Act in March for not having Social Security numbers.

NEW REPUBLICAN STIMULUS PROPOSAL WOULD COST $600B, INCLUDE MORE STIMULUS CHECKS: WHAT TO KNOW

Democratic leadership said over the weekend that they would begin pushing to approve the plan as soon as this upcoming week.

"The Senate, as early as next week, will begin the process of considering a very strong COVID relief bill," Senate Majority Leader Chuck Schumer, D-N.Y., said. "We need recovery and rescue quickly. Everywhere you look alarm bells are ringing."

However, while many Republican lawmakers believe that another relief package is needed to boost the economy's recovery, some have criticized the size of Biden's proposal as too expensive.

Instead, a group of Republicans have proposed a $600 billion proposal, which would include $160 billion toward vaccines, personal protective equipment, support for health care providers, $4 billion for behavioral health and substance abuse services, and $20 billion for schools, as well as an extension in enhanced federal unemployment benefits and "additional resources" for the Paycheck Protection Program and the Economic Injury Disaster Loan Program to help small businesses and their employees.

The group said they would release additional details on Monday.

The Biden's administration proposal will likely fail to meet the 60-vote threshold needed to pass the Senate without Democrats relying on budget reconciliation.

The Biden administration has not ruled out the possibility of using reconciliation to pass the measure, with White House press secretary Jen Psaki telling reporters last week that "we are not going to take any tools off the table."

COVID-19 has infected over 26 million Americans and killed over 441,000 Americans since March, according to Johns Hopkins University. Lockdown measures adopted across the country to curb the spread of the virus have cost millions of Americans their jobs.