Democratic Messaging Diluted as Obama Pleads With Base 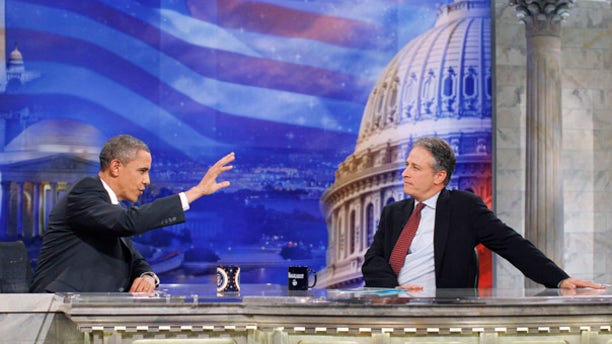 Wednesday: President Obama gestures during a commercial break as he talks with host Jon Stewart at a taping of Comedy Central's "The Daily Show with Jon Stewart," in Washington. (AP)

President Obama still has a series of campaign events this weekend ahead of Tuesday's Election Day, but it's his appearances off the campaign trail that has Washington watchers wondering whether he's trying to shed his coattails before an expected Democratic drubbing at the polls.

The choice of non-political events the president has selected this campaign season doesn't appear to be doing hopeful Democrats any favors. And with the House expected to lose anywhere from 45-60 Democratic seats to Republicans and the Senate likely to turn a handful or more seats to the GOP, according to the latest polling prognosticators, the president already is setting the bar low for the next two years.

"I'm president and not king," Obama said Wednesday night in a meeting with bloggers meant to shore up what's left of his support. "And so I've got to get a majority in the House and I've got to get 60 votes in the Senate to move any legislative initiative forward."

In the thick of it all, the White House announced that on Thursday Obama would host the Americans involved with freeing the Chilean miners from their underground crypt two weeks ago. One of his biggest events of the past month was the delivery of solar panels to the White House roof.

White House Press Secretary Robert Gibbs said the meeting with the rescuers was scheduled because several U.S. government agencies and private companies in the U.S. were instrumental in helping the miners and it was a story many Americans watched closely.

The event may also serve as a timely diversion after the president's appearance the night before on "The Daily Show," the fake news show hosted by Jon Stewart that has been taping in Washington, D.C., this week ahead of a rally aimed at satirizing Glenn Beck's "Restoring Honor" rally in August.

During the taping, the president fielded a question from Stewart in which he described the president's agenda as too "timid."

"You ran with such, if I may, 'audacity -- so much of what you said was, 'Great leaders lead in a time of opportunity,' 'we're the ones we're looking for.' Yet legislatively it has felt timid at times. I'm not even sure at times what you want out of a health care bill," Stewart said

Obama responded that he has "a profound disagreement with you and I don't want to lump you in with a lot of other pundits but, but this notion that health care was 'timid,' you've got 30 million people who are gonna get health insurance as a consequence of this."

Obama was lambasted by news outlets for his performance. The Obama-friendly Washington Post described as undignified and unpresidential. In a seemingly hostile headline, the reporter called the night one in which the joke was on the president.

But Gibbs, calling Stewart "as good an interviewer as there is in the public domain right now," said the White House didn't expect Obama was going to be on the show to answer questions about his dog, and he was pleased with the discussion despite suggestions that the appearance devolved into a public squabble between the president and his base.

Gibbs added that no one is sneezing at the ability to reach the 9 million-plus viewers who regularly watch the Comedy Central program. He also pointed to a Pew poll that shows Obama's support among Democrats at the highest of five past presidents at this stage in their presidency.

Gibbs said nothing in recent polls indicate that Democrats are abandoning him.

"This overall notion of huge disappointment among Democratic voters, it is is not matched in any of the empirical data that you guys produced and that we see," Gibbs said.

Democratic strategist Mary Anne Marsh said she too doesn't fault the president for going on "The Daily Show," which reaches young voters who don't use traditional news media to get their information.

But as the president grasps for his political base, the polling shows he's lost some key constituencies, including women, Catholics and other centrist groups that went Democrat two years ago. Intensity among minority and youth voters, two other Democratic base groups, also isn't as strong as in 2008.

Highlighting the concern that Obama may be losing his base, Gibbs on Thursday launched a Twitter question and answer session that he said will become an occasional affair.

Describing it as something new in which viewers can take first crack, Gibbs fielded only a few of the questions that included such inquiries as "President Obama thinks 9.6% unemployment after nearly $1 trillion in stimulus spending is a "heckuva job?"

"Where are the jobs?!" and "How about the President CUTS GOV Spending instead of eliminating our tax relief? (ie mortgage tax credit)."

Immediately after Gibbs' press briefing, the White House announced the president would not make remarks following his meeting with the miners' rescuers, removing any opportunity to see the president five days before the election.