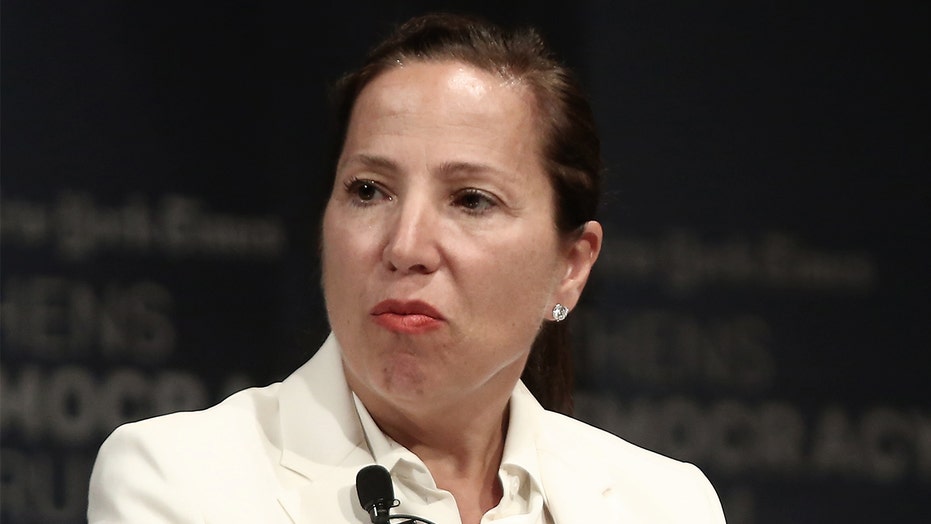 California Lt. Gov. Eleni Kounalakis, a former U.S. ambassador to Hungary, traveled to an event the federal government boycotted in Beijing last year and praised student-exchange programs, like the one a suspected spy used to network with Rep. Eric Swalwell.

"Education is important to us in California – and countries around the world participate in our success by sending thousands of international students to our state to study side-by-side with our own American students," Kounalakis, a Democrat, said at the One Belt One Road summit last April. "In fact, at this moment, 9 percent of the students studying in our University of California system are from China."

She noted her own background as the daughter of immigrants and touted foreign exchange programs.

Then-Ambassador Eleni Kounalakis during a session in the context of the fourth annual Athens Democracy Forum, at the Athens Concert hall, Megaron, on September 15, 2016. (Photo by Panayiotis Tzamaros/NurPhoto via Getty Images)

"This robust educational exchange fosters the sharing of culture and ideas – and builds personal relationships which go on to be the basis of mutual understanding, international cooperation and economic innovation," she said.

Suspected spy Christine Fang, also known as Fang Fang, allegedly used her guise as a student at California State University, East Bay, to host extracurricular networking events. They allowed her to rub elbows with Swalwell, a Democrat, and other officials – including a pair of Midwestern mayors she allegedly slept with as she fed information back to China’s intelligence officials.

Suspected spy Christine Fang, also known as Fang Fang, allegedly used her guise as a student at University of California, East Bay, to host extracurricular networking events that allowed her to rub elbows with Swalwell and other officials.

She became president of the now-defunct Chinese Student Association and won an award for school spirit.

Kounalakis’ speech resurfaced Wednesday when a Twitter user wrongfully accused California Gov. Gavin Newsom of signing the state up for China’s multitrillion-dollar Belt and Road Initiative. The international infrastructure investment project has been painted by critics as a scheme for global economic dominance and debt-trap diplomacy.

The tweet included a cropped headline that read "California Signs up for Belt & Road."

But the original headline, in the Hong Kong-based South China Morning Post, reads: "California signs up for China’s Belt and Road Forum to help in fight against climate change."

Heads of state from 37 countries appeared at the three-day conference in April 2019, according to the China Daily, a state-owned English-language newspaper. But the Trump administration chose not to take part amid a trade spat between the U.S. and China.

Kounalakis spoke at the forum, and her prepared remarks are posted on her official website.

"The reason I came to Beijing to participate in the One Belt, One Road conference is primarily to speak about climate change, and urge participants to prioritize this issue, and consider how the Belt and Road Initiative can drive positive action around this global threat," she said.

She later said the Belt and Road Initiative is an opportunity for China to commit to combating climate change and that she hoped it would be prioritized in all of the venture’s projects.

Kounalakis’ office did not immediately respond to a Fox News request for comment.