Sen. Josh Hawley speaks out after announcing plan to object to electors

The Missouri lawmaker joins 'The Story' exclusively to react to criticism

Shaheen said the junior senator from Missouri's plan, which likely will delay certification of Biden’s victory, was "outrageous."

"More than that, it borders on sedition or treason," Shaheen said in an interview with MSNBC.

Congress is slated to meet Jan. 6 to certify Biden’s victory in the Electoral College, by a 306-232 vote. The Trump campaign claimed that widespread voting irregularities contributed to Biden’s victory and it has pursued legal challenges in several states. 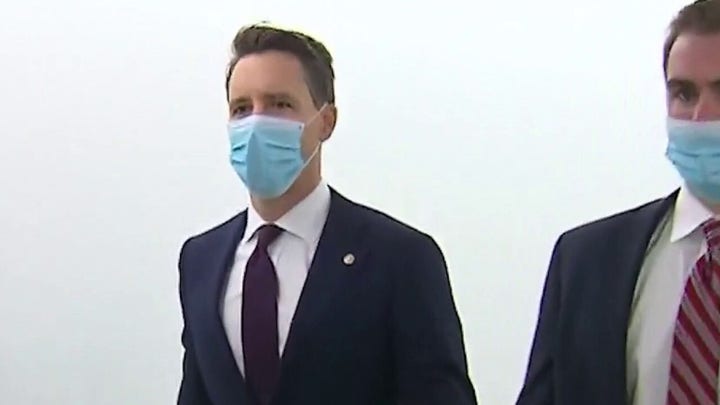 Hawley’s objection would force both houses of Congress to debate the merits of his claims. The senator called on Congress to investigate claims of voter fraud and take steps to secure election integrity.

"I cannot vote to certify without pointing out the unprecedented effort of mega-corporations, including Facebook and Twitter, to interfere in this election, in support of Joe Biden," Hawley said in a statement. "At the very least, Congress should investigate allegations of voter fraud and adopt measures to secure the integrity of our elections. But Congress has so far failed to act."

Shaheen took aim at efforts by Trump, Hawley and other Republicans to dispute the election results, noting the "peaceful transition of power from one administration to the next" was "the foundation of a Democracy."

"The fact that we’ve got somebody who took an oath to protect and defend the Constitution of the United States, which calls for the peaceful transition of power – that’s one of the basic tenets of our democracy," Shaheen said. "A former attorney general, who should know better, that he is standing up and doing that is just an effort to undermine our democracy that is unacceptable."

The Trump campaign’s bid to challenge election results in court has proved unsuccessful. In a petition filed late Wednesday, the president asked the Supreme Court to void voting results in Wisconsin.

Biden’s inauguration is slated for Jan. 20.