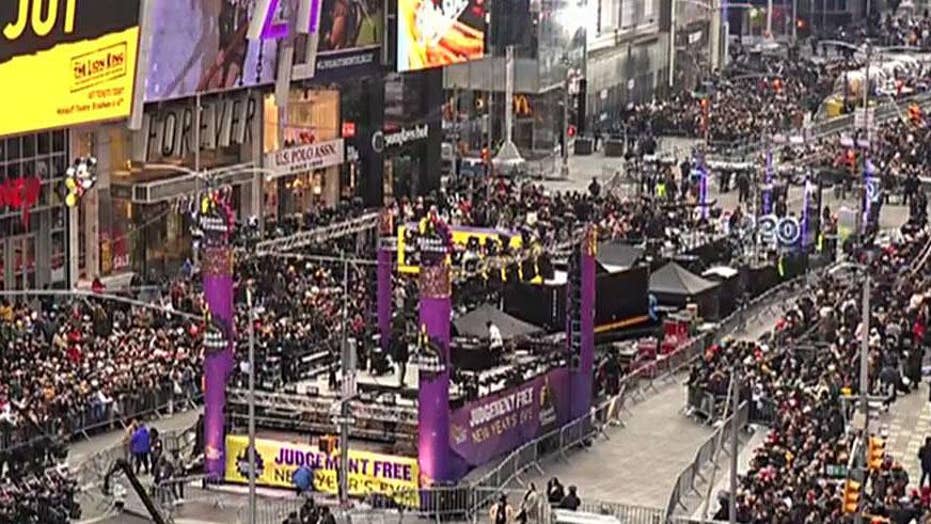 NYPD: Times Square will be the safest place on earth

“Probably not. I’m campaigning tomorrow, too, so it would be unseemly for the candidate to get sloshed or anything on New Year’s Eve,” the tech entrepreneur told Fox News on Tuesday afternoon as he kicked off the first of a half-dozen events to ring in 2020 in New Hampshire, the state that holds the first primary in the race for the White House.

AN EARLY LOOK AT THE FOURTH QUARTER FUNDRAISING WINNERS AND LOSERS

“I need to be at it again tomorrow. So you know, you have to maintain control of your faculties,” noted Yang, who's been known to cut it up on the campaign trail.

Yang -- the onetime-long shot-turned-middle-tier Democratic nomination contender -- will culminate his day with a sold-out New Year’s Eve party at a brewpub in the city of Nashua. Even though he says he won’t be getting crazy, he said: “I hope that people around me, though, do feel free to indulge, do whatever they want, because hey, it’s New Year’s Eve and it’s party time.”

And his message to his supporters is “don’t let me be a stick in the mud because I’m going to be in an excellent mood and we’re going to ring in the New Year right, and then we’re going to help make the '20s the decade that we’re proud of to reverse a lot of the stuff that’s gone on in this country over the last number of years, unfortunately.”

Yang isn’t the only Democratic White House hopeful planning to ring in the new year with supporters.

Sen. Michael Bennet of Colorado is touting that he’ll hold the first house party of 2020. The long shot contender for the nomination will headline a campaign gathering in Manchester, N.H., that starts at one minute after midnight.

Sen. Amy Klobuchar is ringing in 2020 with her New Hampshire campaign staff and volunteers. The event wraps up a jam-packed three-day swing through the state by the Minnesota Democrat.

And Rep. Tulsi Gabbard of Hawaii -- who is renting a home in the state through the Feb. 11 primary -- held a town hall in Portsmouth in the late afternoon.

SANDERS, IN IOWA, SLAMS BIDEN'S OPENESS TO A BIPARTISAN TICKET

Three contenders will spend New Year’s Eve in Iowa, the state that kicks off the presidential primary and caucus nominating calendar.

Sen. Bernie Sanders of Vermont is holding what’s being billed his “Big New Year’s Bash” at the downtown Marriott hotel in Des Moines. Sanders’ campaign spotlighted that the soiree would feature what they billed as “Prince’s longtime backing band.”

Sen. Cory Booker of New Jersey and billionaire environmental and progressive advocate Tom Steyer are also in Iowa as the calendar moves from 2019 to 2020.

Former Massachusetts Gov. Deval Patrick is in South Carolina, which holds the first southern primary. On New Year’s Day, he’s planning to attend services at Mother Emanuel in Charleston, where nine African-American churchgoers were shot to death in a 2015 massacre.

Sen. Elizabeth Warren of Massachusetts -- marking a year since she set up a presidential exploratory committee as the first official step toward running for the White House -- gave a New Year’s Eve speech in Boston.

In her address, Warren took aim at congressional Republicans for the unwavering support of President Trump during the impeachment process.