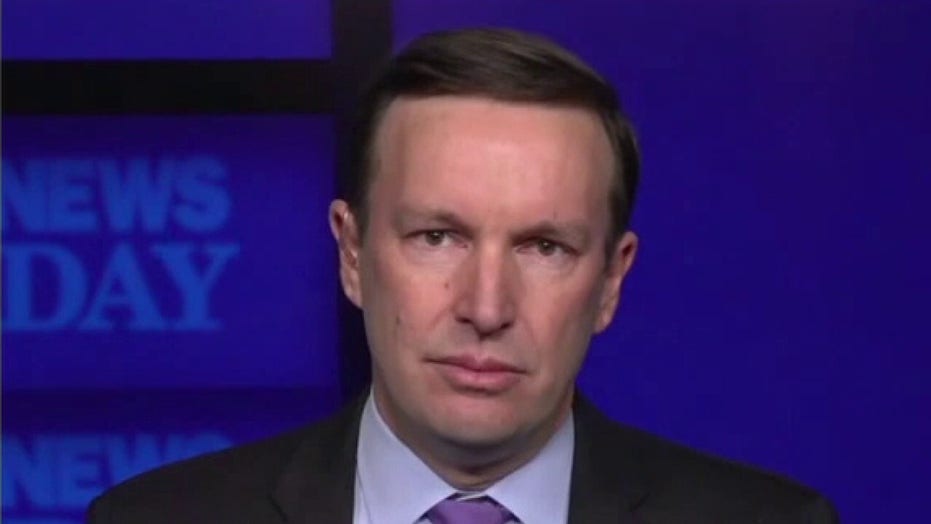 Sen. Chris Murphy on Sunday said that he believes the Senate has a responsibility to hold an impeachment trial of former President Donald Trump, adding that it is an open question whether or not such a trial is constitutional.

Murphy, D-Conn., told "Fox News Sunday" host Chris Wallace that he believes the fact the Senate could bar Trump from holding office in the future shows there is still recourse available from an impeachment conviction. He also said that it would be in illogical precedent for any president to be able to resign to avoid the consequences of an impeachment conviction, one that would essentially neuter the purpose of impeachment.

"I think that that clause that gives Congress the responsibility to deny an official future office requires us to take this step even though the president has left office," Murphy said. "And, of course, as you cited there, is precedent for that. It sets up a strange circumstance by which a president or any official could very quickly resign to preserve their right to run later on even though they engaged in pretty serious misconduct."

But Murphy also acknowledged that there is still some ambiguity in the debate. The Senate has never held an impeachment trial for a former president before, and no court has ruled on whether one is permitted according to the Constitution.

"I will admit that this is, of course, a matter of first impression. And so I don't think the case that Senator Paul is making here is a ridiculous one," he said. "I come to a different judgment."

Murphy added: "So I think we have this responsibility. But I -- listen, I admit that Senator Paul's case is, you know, not from outer space."

This is consistent with what legal scholars who've expressed differing opinions about the constitutionality of an impeachment trial for a former president have said -- even if they have an opinion one way or another, the question as a matter of law is unsettled.

The Senate previously held an impeachment trial for former Secretary of War William Belknap in the 1800s, which Democrats say shows its authority to try former officials. But Republicans say circumstances are different for presidents.

Murphy's comment is a break from Senate Majority Leader Chuck Schumer, D-N.Y., who has said it is "deeply, deeply irresponsible" for senators to say an impeachment trial is unconstitutional.

Sen. Rand Paul, R-Ky., who has been one of the most vocal senators against the constitutionality of the impeachment trial, raised a point of order last month that forced senators to vote on whether the trial is constitutional. Five Republicans voted with all 50 Democrats that it is, allowing the trial to move forward.

But 45 Republicans voted that the trial is unconstitutional, signaling that House impeachment managers may have an insurmountable obstacle to overcome in securing Trump's conviction.

FILE - In this Wednesday, Jan. 6, 2021 file photo, supporters of President Donald Trump scale the west wall of the the U.S. Capitol in Washington. The attack on the U.S. Capitol by an angry mob of President Donald Trump's supporters shocked many Americans who thought such a violent assault by their fellow countrymen wasn't possible. But Timothy McVeigh's hatred of the federal government led him to bomb the Alfred P. Murrah Federal Building in Oklahoma City over 25 years earlier, on April 19, 1995, and killed 168 people. (AP Photo/Jose Luis Magana, File)

"I want to address the vote the Senate took yesterday on the point of order raised by the junior Senator from Kentucky," Schumer said on the floor after the vote. "I regret to say: for 45 Republican Senators to vote for a spurious constitutional objection to the coming impeachment trial was deeply, deeply, irresponsible."

Schumer added: "The constitutional objection has been completely debunked by more than 150 constitutional scholars representing the entire breadth of the political spectrum, including very prominent conservatives... I would simply say to all of my colleagues: make no mistake – there will be a trial, and the evidence against the former President will be presented, in living color, for the nation and every one of us to see."

Paul, meanwhile, made his case for the unconstitutionality of the trial on "Fox News Sunday."

"When you look at impeaching the president, the Constitution has some very specific requirements. It says when the president is impeached, the chief justice shall preside," Paul said. "And to me, this is one of the shocking things. When we showed up and we found out that yes, Chuck Schumer had called Justice Roberts -- and this hasn't been reported widely, but he did -- and Justice Roberts said heck, no, I'm not going to cross the street because you're not impeaching the president."

Instead of Roberts, Vermont Democrat Sen. Patrick Leahy, the chamber's president pro tempore, will preside over the trial. The person presiding over the trial is unlikely to affect the proceedings significantly.

"This was a strong signal to all of us that this was going to be a partisan hearing with a Democrat in the chair who's already voted for impeachment," Paul added. "So it is a farce, it is unconstitutional. But more than anything it's unwise, and going to divide the country."

Paul said that the impeachment trial is happening for mainly partisan reasons, and that it's almost certain to end in Trump not being convicted.

"They can't let go of President Trump and they're going to keep kicking and kicking and kicking," Paul said. "Zero chance of conviction, 45 Republicans have said it's not even a legitimate proceeding so it's really over before it starts."