Dem mocked for ignoring slavery, claiming 'never in history' have people worked without pay in US 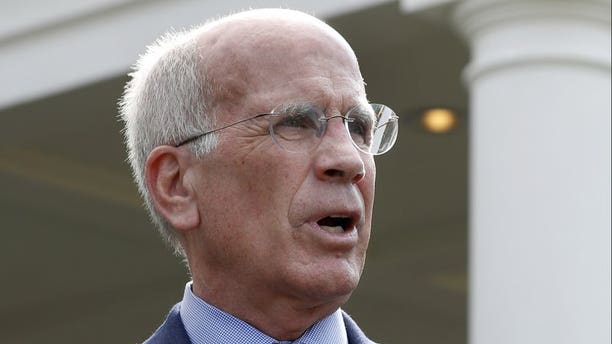 U.S. Rep. Peter Welch, D-Vt., speaks in front of the West Wing after a bipartisan meeting with President Trump at the White House in Washington, Sept. 13,  2017. (Associated Press)

A Vermont Democrat was forced to apologize Tuesday for ignoring the history of slavery in the U.S. in an effort to promote his bill banning federal workers from working without pay amid the partial government shutdown.

“Never in the history of this country has it been legal to make people work for free," U.S. Rep. Peter Welch wrote in a tweet, "but that’s what’s happening to federal employees. This can never happen again.”

The remark immediately prompted backlash, with some reminding the lawmaker of the nation's history with slavery, forcing Welch to issue a statement apologizing for the comments. He didn’t delete the original tweet.

“Sincere apologies,” Welch wrote in his apology on Twitter. “Nothing worse in the history of our country than the brutal inhumanity of the horrible, relentless, and savage infliction of involuntary servitude-slavery- on millions of people whose freedom was denied.”

AS GOVERNMENT SHUTDOWN CONTINUES, MORE TSA AGENTS CALLING OUT 'DUE TO FINANCIAL LIMITATIONS'

Welch’s initial tweet tried to rally others to support his bill that makes it illegal for federal workers to work without pay during government shutdowns.

Since the beginning of the shutdown Dec. 22, many federal workers have either been furloughed or have been working without pay. While workers are currently not receiving their paychecks, all federal workers are expected to receive back pay after a funding bill passes.

According to various estimates, around 400,000 federal workers are working without pay due to the shutdown, while around 350,000 are furloughed.

It remains unclear when the government is likely to be reopened as the standoff between congressional Democrats and President Trump continues. Trump has demanded more than $5 billion funding for the border wall, a demand Democrats apparently ruled out.