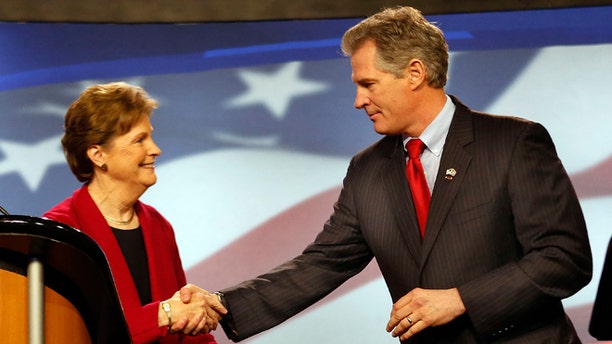 The meandering conversation about New Hampshire regions started after WMUR reporter James Pindell asked Brown at the debate Thursday about what is going "right" and "wrong" in the economy of Sullivan County, which hugs the western edge of New Hampshire.

Scott, who used to represent Massachusetts in the Senate, has faced "carpetbagger" accusations throughout his campaign to unseat Democratic Sen. Jeanne Shaheen in New Hampshire. In response to Pindell's question, Brown launched into a general answer about different regions of the state.

Brown responded: "I'm talking about any place past Concord, actually, and the challenges of our state."

This is where the disagreement arose. After Brown listed several "challenges," Pindell interrupted again, his voice raised.

"Sullivan County is west of Concord," he said. "It's not north of Concord, Senator Brown. So what do you see as going well and what's not going well there?"

Brown maintained that "the challenges are the same in every county in our state."

Pindell then pitched to Shaheen, with the introduction, "Of course you've been that county's governor and senator for 12 years."

(The video, below, was posted by the state Democratic Party, with a headline accusing the Republican nominee of being "clueless" on the topic.)

Brown's campaign reportedly claimed afterward that the GOP candidate was referring to Mount Sunapee, a ski resort in Sullivan County he had visited.

Though New Hampshire Democrats seized on the exchange to mock Brown, Pindell later acknowledged that, while Sullivan County is west of Concord, much of it also lies north of the capital.

"I said that Sullivan County was west of Concord, not north of Concord. The truth is, it's both. So on this point, Scott Brown was right, I was wrong, and I apologize to Scott Brown and to both campaigns," he said.

The incident was reminiscent of an exchange during a 2012 presidential debate where CNN's Candy Crowley corrected Mitt Romney on a point about Benghazi, though the matter was in dispute.