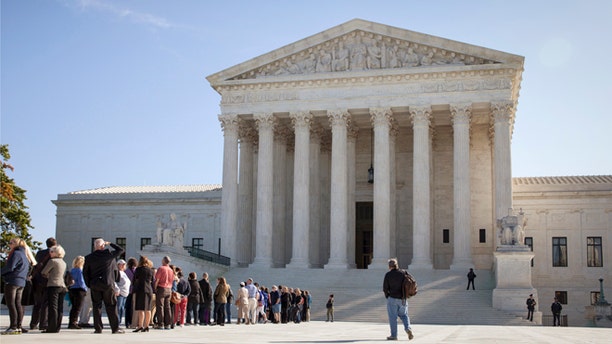 In this Monday, Oct. 6, 2014 photo, people wait to enter the Supreme Court in Washington as it begins its new term. (AP)

County clerks in Nevada turned away gay couples eager to marry Wednesday amid a flurry of conflicting court decisions, including a U.S. Supreme Court ruling that blocked partners in Idaho moments before they would have picked up marriage licenses.

"I think I have whiplash," said Mary Baranovich who was a plaintiff in a Nevada court challenge to the state's gay marriage ban with Beverly Sevcik, her partner of 43 years.

A 9th Circuit ruling late Tuesday cleared the way for Idaho and Nevada to begin issuing same-sex marriage licenses. Couples gathered early Wednesday, but a ruling by Justice Anthony Kennedy brought such plans to a halt in both states.

Later, Kennedy clarified that the stay he approved applied only to Idaho, but Nevada officials said they wanted to wait for more clear direction.

A Supreme Court decision Monday effectively made gay marriage legal in about 30 states, but for several how and when that would happen remained in doubt. In South Carolina, for example, a judge issued a license for a handful of gay couples, but no one got married as the state's attorney general asked the Supreme Court for a stay.

But at 8:01 a.m., Ada County Clerk Chris Rich handed the Supreme Court memo to a lawyer and told a small crowd of gay couples and their supporters gathered in a Boise courthouse, "We're not issuing same-sex marriage licenses today."

The announcement left the room in stunned silence, except for a small child asking over and over, "Why?"

"We were past the metal detectors, we were just a few feet away from the clerk," said Amber Beierle. "And then our attorney was handed a one-page document. Apparently, it was Justice Kennedy telling us, No."

Beierle said the toughest moment was when she called her mother, who was driving into town to help celebrate. "There's just something about hearing your mom's voice that makes everything seem a little more real," she said.

Beierle began to choke up on the phone as she tried to fight back tears. She said she and her partner, Rachael Beierle, were not going to give up their fight, but it was an especially bitter moment since they had never been this close to getting married before.

At several points throughout the day, couples thought marriages might begin. But as courts began to close, Diana Alba, the Clark County clerk, said no one in the state would be issuing marriage licenses Wednesday, and she didn't know when they might begin. "I wish I knew a date," she said.

Tara Traynor and her fiancee, Cathy Grimes, had been among those waiting at the Clark County Marriage License Bureau, checking their phones for court developments and letting straight couples cut in front of them while they waited for the legal OK to get a license themselves.

"It's kind of disheartening," Traynor said. "We wait and wait, and we're hopeful."

Traynor and Grimes have been together for eight years and were among the first couples to register as domestic partners in Nevada. They went straight to the bureau when they thought they could get a license.

"We wanted to be a part of history," Traynor said.