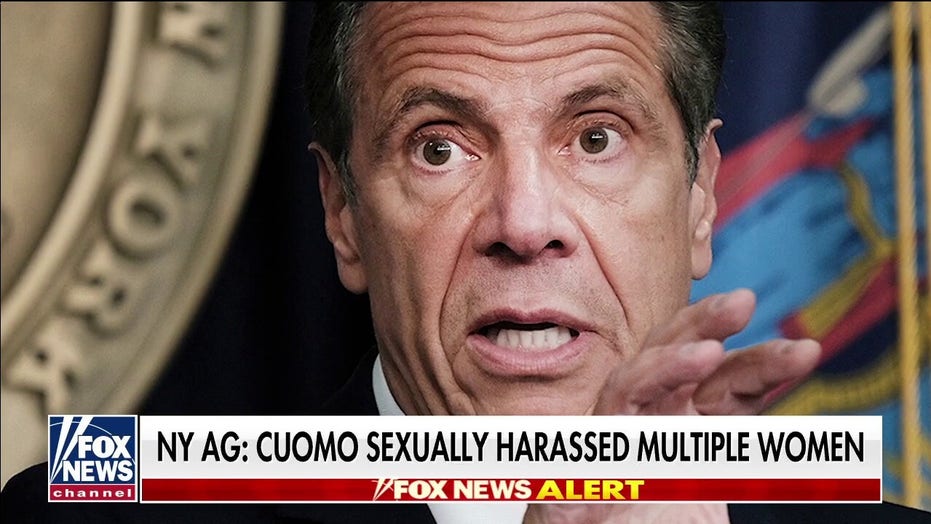 A flood of politicians from the left, right and center – including every member of the U.S. Senate and House representing New York – has now called on Gov. Andrew Cuomo to resign after a report by the New York attorney general on Tuesday concluded Cuomo broke the law with his repeated sexual harassment.

"As we have said before, the reported actions of the Governor were profoundly disturbing, inappropriate and completely unacceptable," Sens. Chuck Schumer, D-N.Y., and Kirsten Gillibrand, D-N.Y., said in a statement. "Today’s report from the New York State Attorney General substantiated and corroborated the allegations of the brave women who came forward to share their stories -- and we commend the women for doing so."

"No elected official is above the law," Schumer and Gillibrand added. "The people of New York deserve better leadership in the governor’s office. We continue to believe that the Governor should resign."

Both Schumer and Gillibrand previously said Cuomo should resign as evidence against the governor mounted earlier this year. But House Democratic Caucus Chair Rep. Hakeem Jeffries, D-N.Y.,. who is the highest-ranking New Yorker in the House, stopped short of an explicit call for the governor to resign at the time. But after the attorney general's report, Jeffries was ready to call for Cuomo's ouster.

"The investigation has found that the Governor engaged in abusive behavior toward women, including subordinates, created a hostile work environment and violated state and federal law," Jeffries said Tuesday. "The time has come for Governor Andrew Cuomo to do the right thing for the people of New York State and resign."

Cuomo remained defiant Tuesday, calling a press conference Tuesday denying the allegations of the report, which names 11 women that he allegedly sexually harassed.

"My attorney, who is a non-political former federal prosecutor, has done a response to each allegation. And the facts are much different than what has been portrayed," Cuomo said. "I want you to know directly from me that I never touched anyone inappropriately or made inappropriate sexual advances."

Cuomo included in his response many photos of him kissing, hugging and otherwise putting his hands on several people, including men and women.

"I do embrace people. I do hug people. Men and women," Cuomo added, "On occasion I do slip and say sweetheart or darling or honey. I do banter with people. I do tell jokes, some better than others. I am the same person in public as I am in private."

The legal defense Cuomo mentioned in the press conference was 85 pages long and stated that the attorney general's office "have directed an utterly biased investigation and willfully ignored evidence inconsistent with the narrative they have sought to weave form the outset. In coming to their conclusion, they ignored the Governor’s testimony and substantial corroborating evidence, and were not candid about that fact at a press conference during which they announced their findings."

Rep. Jerry Nadler, D-N.Y., led a statement with a 11 other House Democrats from New York, including Rep. Alexandria Ocasio-Cortez, D-N.Y.

"Sexual harassment is an extremely serious transgression, and we stand with the brave women who have come forward to share their experiences working for and around Governor Andrew Cuomo," they said. "It is clear that he engaged in inappropriate, unlawful and abusive behavior… For the good of New York State, Andrew Cuomo must resign. If he does not, the New York State Assembly must begin impeachment proceedings."

Meanwhile, Rep. Elise Stefanik, R-N.Y., who has been on of Cuomo's staunchest critics is calling for Cuomo to be arrested in light of the fact the attorney general concluded he broke state and federal law.

"RESIGN IMPEACH ARREST," Stefanik tweeted. "This Criminal Sexual Predator will not go quietly. Needs to be REMOVED. This is a dark time for the corrupt cesspool in Albany."

She also highlighted a post from the Albano County District Attorney's office which said there is an "ongoing criminal investigation" into Cuomo by that office.