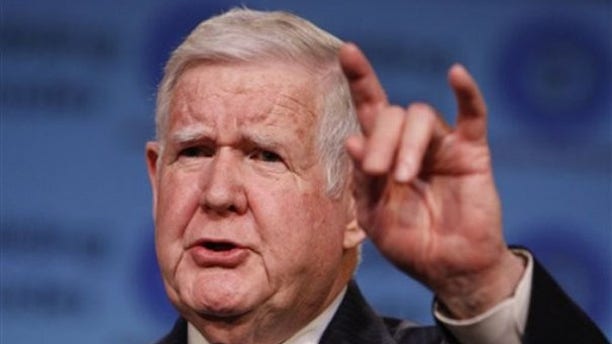 The Navy's decision to name a ship for the late Rep. John Murtha has outraged some critics who have not forgiven the Pennsylvania Democrat for accusing U.S. Marines of murdering Iraqi civilians "in cold blood" five years ago.

The Navy is naming its newest San Antonio-class amphibious transport-dock LPD 26 for Murtha, the powerful chairman of the House Defense Appropriations Subcommittee who became an outspoken and influential critic of the Iraq war.

Murtha died in February at age 77 after complications from gallbladder surgery.

San Antonio-class ships support Marines and can carry roughly 700 troops, their equipment and vehicles. They are usually named after cities; the USS Murtha will be a break from that tradition.

The Washington Times denounced the tribute to the powerful congressman, a former Marine Corps officer, in its editorial on Thursday.

"This is a slap in the face to every service member who bridled when Murtha publicly accused Marines in Iraq of intentionally killing women and children in cold blood," the editorial reads.

The newspaper said the honor shouldn't go to "a political hack whose most successful defensive maneuver was saving his pork-laden earmarks from surprise attacks of fiscal responsibility."

Another blogger wrote that it "seems oddly premature" to affix "Murtha's name to a ship while real and continuing issues of ethics violations and abuses of power remain fresh in the collective memory."

In February, the House ethics panel cleared Murtha in an investigation of his role in awarding defense contracts to a firm led by a former aide.

Murtha served in Korea and received a Bronze Star and two Purple Hearts for his service in Vietnam. In 1974 he became the first Vietnam War combat veteran elected to Congress and went on to serve his Pennsylvania district for 18 terms.

But the Navy's decision to honor him has become the focus of controversy because of his criticism of the Iraq war.

In 2002, Murtha voted to authorize President George W. Bush to use military force in Iraq, but his growing frustration over the administration's handling of the war prompted him in November 2005 to call for an immediate withdrawal of U.S. troops.

His criticism of the Iraq war intensified in 2005, when he accused Marines of murdering Iraqi civilians "in cold blood" in Haditha after a Marine died and two were wounded by a roadside bomb.

Charges against six of the Marines have been dropped, and one Marine was acquitted. The last Marine, Staff Sgt. Frank Wuterich, will stand military trial in September on reduced charges of voluntary manslaughter in nine of the 24 deaths and other crimes. Wuterich was originally charged with shooting 17 Iraqi civilians.

Critics said Murtha unfairly held the Marines responsible before an investigation was concluded and fueled enemy retaliation. He said that the war couldn't be won militarily and that such incidents dimmed the prospect for a political solution.

Murtha, nicknamed "The King of Pork," also faced scrutiny for earmarking federal dollars for projects in his district.

While critics object, Navy Secretary Ray Mabus, who announced the tribute, made clear in a statement following Murtha's death in February that the congressman was respected at the Pentagon.

"Both in uniform and in the halls of Congress, Chairman Murtha dedicated his life to serving his country both in the Marine Corps and Congress. His unwavering support of our sailors and Marines, and in particular our wounded warriors, was well known and deeply appreciated," Mabus said.

A senior Republican congressional aide told FoxNews.com that it's doubtful much criticism will emerge from Capitol Hill.

"In the past, whenever the Navy decides to name a ship after someone, especially a former member of Congress, generally there's not that much pushback," the aide said.