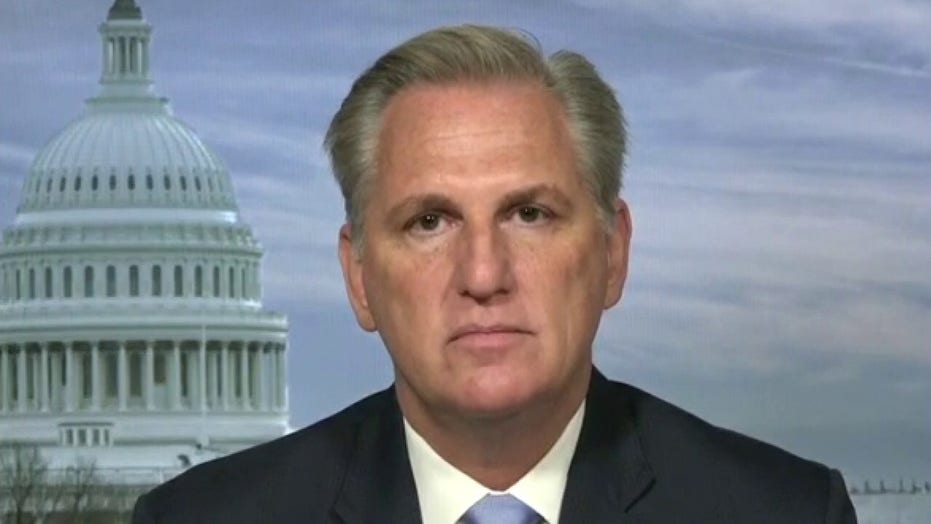 A brawl is brewing between liberal and moderate Democrats. One can find evidence of this fight in the battle to increase the minimum wage to $15 an hour as part of the latest coronavirus relief bill. The left failed in that effort. And despite having control of the House, Senate and White House, exclusion of the wage hike reflected the political realities of what progressives can do with a 50/50 Senate and a House with 221 Democrats and 211 Republicans.

This doesn’t bode well for progressive initiatives like gun restrictions, climate change legislation and immigration reform. A failure to translate those campaign promises into legislative achievements could drive progressives up the wall by the end of this Congress.

Speaker of the House Nancy Pelosi, D-Calif., meets with reporters before the House votes to pass a $1.9 trillion pandemic relief package, during a news conference at the Capitol in Washington, Friday, Feb. 26, 2021.  (AP)

To wit: Senate Parliamentarian Elizabeth MacDonough serves as a procedural umpire. She ruled recently that the Democrats’ gambit to include a $15-an-hour minimum wage increase in the COVID relief bill violated special budget reconciliation rules.

Lawmakers can stuff almost anything they want in a garden variety piece of legislation. But not in a measure treated under the unique budget reconciliation process.

Democrats elected to use the special budgetary framework for the COVID measure to avoid a filibuster. Otherwise, they need 60 votes to rebuff a filibuster. With only 50 Democrats in the Senate and only a handful of "gettable" Republicans for this measure, attaining 60 votes was never going to happen. So, Democrats teed up the budget reconciliation option.

Deploying the once-a-fiscal-year reconciliation process terminates the filibuster for this bill – and this bill only.

But there was a tradeoff.

Those budget rules restrict provisions from the bill that address policy or contribute to the deficit over an extended period. MacDonough ruled that the minimum wage proposal didn’t qualify for reconciliation.

In many respects, this is not a surprise. Just days ago, President Biden doubted that the minimum wage increase would survive MacDonough’s vetting for this COVID bill.

"I certainly do think that there should be either an override (of MacDonough’s ruling) or a replacement," said Rep. Ilhan Omar, D-Minn. "There are no more excuses."

"I think the parliamentarian was wrong on this call," said Rep. Alexandria Ocasio-Cortez, D-N.Y.

When asked if they should sack MacDonough, Ocasio-Cortez replied "all options should be on the table."

Jayapal said Senate budget reconciliation rules "were put in there, really, to preserve the power of White segregationists and the power of the minority."

Jayapal may be right about some of the reasons regarding "segregationists" and the Senate filibuster. But not when it comes to budget reconciliation.

The reason is that the Budget Act of 1974 governs the budget reconciliation process in the Senate. That’s 1974, not 1874.

Omar and Jayapal are right. There is a way to potentially contest MacDonough’s ruling.

A senator could challenge MacDonough’s ruling – but the Senate would have to find itself in a very specific procedural posture – essentially a parliamentary cul-de-sac - where nothing else could be debated. Thus, senators could set up a vote to overturn MacDonough’s ruling by detonating the Byrd rule on a simple majority vote.

This would not constitute a Senate "rules change." But a "precedent" change. The Senate conducts much of its business via "precedent" and not by the 44 Standing Rules of the Senate. Such a tactic would be akin to the "nuclear option" used in 2013 and 2017 to curb filibusters on executive branch and Supreme Court nominees.

Overriding the parliamentarian boils down to the math.

Sen. Joe Manchin, D-W.Va., is one Democrat who opposes including the minimum wage increase in the COVID bill. Incidentally, Manchin is now in the seat held for decades by Byrd. Manchin has indicated he would also oppose nuking the Byrd Rule.

In other words, if you are struggling to get 51 votes, you’ll never wrangle 60.

Yes. It’s happened before. In 2001, Senate Republicans relieved then Parliamentarian Bob Dove of his position after some rulings they didn’t like. But there is a tiny universe of persons on the planet qualified to perform the parliamentarian’s duties.

Democrats criticized former President Trump’s nomination of Supreme Court Justice Amy Coney Barrett to the high court last fall. They asserted the former president only tapped Barrett because she would make rulings favorable to the Trump administration. Do Democrats really want to install a parliamentarian who will only rule in their direction? Or, would they rather have someone objectively calling balls and strikes?

Democrats included the $15 minimum wage increase in their $1.9 trillion COVID bill passed early Saturday morning. But Democrats must decide whether or not to support the next round of the bill after the Senate strips the minimum wage provision from the measure.

Ocasio-Cortez said moderate Democrats should be "lucky that progressives aren't asking for $24 (an hour) right now."

But that’s the problem. Procedural gymnastics with MacDonough revealed just how little power progressives truly have in Washington. This was always going to be the tension inside the party with Democrats controlling the White House, House and Senate.

Liberals hoped to raise the minimum wage. Approve climate change legislation. Impose gun control. Adopt immigration reform. Grant Washington, D.C., and Puerto Rico statehood. Those may be great campaign promises. But parliamentary realities will get in the way of actually enacting such plans into law.

One wonders if Democrats overpromised to their base? Or, if liberals will grow disillusioned? It’s a danger for Democrats.

I asked House Speaker Nancy Pelosi, D-Calif., if she thought there would be problems passing the bill when it came back from the Senate.

"No," replied the speaker.

That’s the verdict on the coronavirus bill. But bigger problems could lurk for the party if they don’t enact major initiatives they promised their left flank.