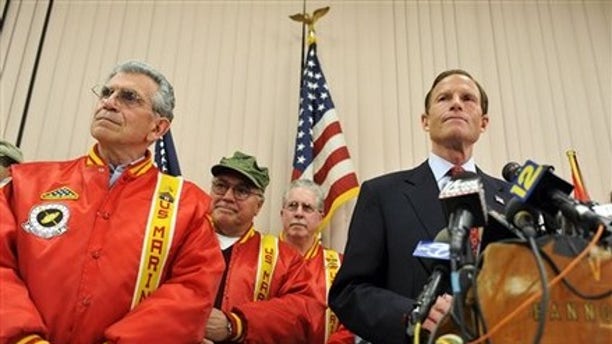 FILE: Connecticut Attorney General and Democratic candidate for U.S. Senate Richard Blumenthal stood with veterans in May to discuss misstatements about his military service during the Vietnam War. (AP Photo) (AP2010)

Already forced to apologize for saying he had served "in" Vietnam in the Marine Reserve rather than stateside, the state attorney general's campaign for U.S. Senate is now being challenged to explain his assertion that he had "never taken PAC money" and has "rejected all special interest money."

Federal records show that he has accepted $480,000 in political action committee money since he made that claim in January. Moreover, his Republican opponent, former World Wrestling Entertainment CEO Linda McMahon, points to nearly $17,000 Blumenthal received as a state legislative candidate in the 1980s -- a figure Blumenthal's campaign does not dispute.

Blumenthal's campaign insists he did not lie -- as McMahon says -- when he said in an interview on MSNBC the day after he announced he was running for the seat of retiring Sen. Chris Dodd that he had never taken PAC money. His campaign says he was referring only to his 20 years as attorney general.

The context of the interview was the race for the Senate seat and how expensive the campaign would be. During the interview, Blumenthal was shown a clip in which McMahon said she would commit whatever personal money was necessary to win because she did not want to take special interest funds.

Blumenthal was then asked how tough the race would be -- and how expensive.

"I've never taken PAC money, and I have rejected all special interest money because I have stood strong and taken legal action against many of those special interests," he responded.

When pressed again on how much the race might cost, Blumenthal said it was too early to tell but said he was going to run a "very grass-roots campaign" and seek fundraising "from ordinary citizens."

Since then, McMahon, a political newcomer, has spent more than $20 million flooding voters' TV sets and mailboxes with ads to boost her name recognition and secure the GOP nomination, and has said she'll spend as much as a total of $50 million of her own money on the race.

And Blumenthal has seen his lead over McMahon shrink in the polls. A Jan. 14 Quinnipiac University poll showed Blumenthal leading McMahon 64 percent to 23 percent. By Aug. 4, that had narrowed to 50-40, with Blumenthal still hanging onto the lead.

Challenges to his credibility are new for Blumenthal, who has spent two decades with high popularity ratings as he groomed his reputation as Connecticut's advocate for consumers.

"Dick Blumenthal. He's not who we thought he was. Apparently, Dick Blumenthal will say anything," reads a McMahon campaign mailer sent to Connecticut voters this week, which highlights the PAC issue. She's also running a TV ad featuring two women sarcastically saying how shocked they are that "Blumenthal misspoke again."

Blumenthal's campaign has denounced the ad as untrue and vehemently denies Blumenthal was trying to mislead anyone, saying he was referring only to his runs for state attorney general during the MSNBC interview.

"They are taking something completely out of context to distort his record and try and tear him down," Maura Downes, his campaign spokeswoman, said of McMahon's campaign. "He was talking about his attorney general races, and he was crystal clear about that."

Blumenthal's campaign responded Friday to the criticism with a TV spot that refers to "Linda McMahon's latest attack ad," which questions how he can fight special interests by accepting PAC money. In Blumenthal's ad, the announcer says, "Doesn't she get it? Dick Blumenthal will always stand up to the special interests," and then highlights some of his high-profile cases involving big tobacco and pharmaceutical companies.

Rich Denesha, 30, of Norwich, said he has heard Blumenthal is an effective attorney general who has taken on special interests. But after hearing about the candidate's misstatements about Vietnam -- words he later apologized for -- and his comments about never taking PAC money, Denesha said he thinks Blumenthal is now playing politics.

McMahon campaign spokesman Ed Patru says Blumenthal has a "troubling habit of being untruthful," an image her campaign has been systematically trying to paint of the Democrat.

In response, Downes said: "People know Linda McMahon's not qualified to be their U.S. senator, and all her money and phony attacks can't change the truth that Dick Blumenthal will always stand up to the special interests and fight for the people of Connecticut."

For example, she said, he is not accepting money from people who work in the attorney general's office or lawyers it hires as outside counsel. He is also taking no donations from individuals connected to companies under investigation by his office, or in litigation with his office.

Among the PAC contributions to his Senate race, there are groups Blumenthal's office has dealt with as recently as 2009 and 2010. For example, federal records show his campaign received $10,000 from the PAC organized by the International Association of Machinists and Aerospace Workers. As recently as Thursday, Blumenthal was urging jet engine maker Pratt & Whitney to reconsider its plans to lay off 129 union workers at its Cheshire plant.

In January, his office argued in federal court for an injunction blocking the transfer of another 1,000 jobs out of state.