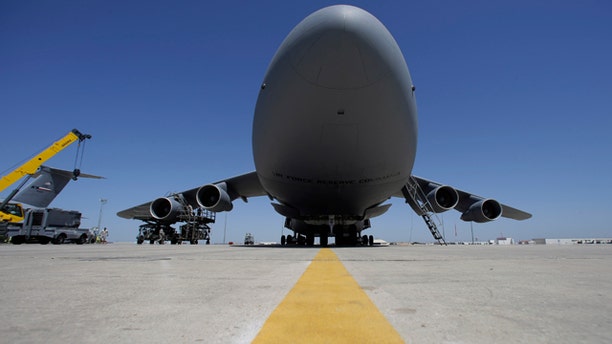 Parked around the airstrip at Lackland Air Force Base are more than a dozen massive C-5A Galaxy transport planes. There is no money to fly them, repair them or put pilots in the cockpits, but Congress rejected the Air Force's bid to retire them.

So every now and then, crews will tow the planes around the Texas tarmac a bit to make sure the tires don't rot, then send them back into exile until they can finally get permission to commit the aging aircraft to the boneyard.

It's not an unfamiliar story.

Idle aircraft and pricey ship deployments underscore the contradictions and conflicts as Congress orders the Pentagon to slash $487 billion in spending over the next 10 years and another $41 billion in the next six months. Yet, at the same time, lawmakers are forcing the services to keep ships, aircraft, military bases, retiree benefits and other programs that defense leaders insist they don't want, can't afford or simply won't be able to use.

The Associated Press interviewed senior military leaders involved in the ongoing analysis of the budget and its impact on the services and compiled data on the costs and programs from Defense Department documents.

The Pentagon long has battled with Congress over politically sensitive spending cuts. But this year, military officials say Congress' refusal to retire ships and aircraft means the Navy and Air Force are spending roughly $5 billion more than they would if they were allowed to make the cuts. In some cases Congress restored funds to compensate for the changes, but the result overall was lost savings.

In other cases, frustrated military leaders quietly complained that they were being forced to furlough civilians, ground Air Force training flights and delay or cancel ship deployments to the Middle East and South America, while Congress refuses to accept savings in other places that could ease those pains.

Along the eastern seaboard, two Navy cruisers -- the USS Anzio in Norfolk, Va., and the USS Vicksburg in Mayport, Fla. -- were scheduled for retirement this year but both are now sitting pierside. Navy leaders will soon schedule the ships for significant repairs and begin readying their crews so they can go back into service.

Altogether, Congress is requiring the Navy to keep seven cruisers and two amphibious warships in service, eliminating the $4.3 billion the retirements would have saved over the next two years.

"A lot of it comes down to parochial political interests," said Todd Harrison, senior fellow at the Center for Strategic and Budgetary Assessments. "No member of Congress wants to have a base closed in their district or to have a fighter squadron relocated out of their district."

Members of Congress argue that they believe the Pentagon sometimes makes bad decisions and other times may purposely target programs that have broad support.

"Certainly that has been a pattern, they've cut Guard and Reserves in areas where it's clearly unwise and Congress steps in to put the money in," said Rep. Michael Turner, R-Ohio, chairman of the House Armed Services air and land forces subcommittee.

While the Navy sought to retire the seven ships, the Air Force wanted to save more than $600 million by retiring C-130 and C-5A cargo aircraft, three B-1 bombers and 18 high-altitude Global Hawk surveillance drones.

Congress disagreed, adding various requirements that the Navy and Air Force maintain the ships and aircraft, and in some cases added money to the budget to cover them. Fifteen of the C-5A Galaxy aircraft no longer set to retire are at Lackland, while 11 are at Martinsburg, W.Va., and are flown by the Air National Guard there.

A senior Air Force official said the service determined that it didn't need all of the aging aircraft. And it pushed to cut the Global Hawks because defense officials determined that the U-2 spy plane, first produced more than 50 years ago, was better suited for the high-altitude surveillance job and would cost less money.

The official also noted that while lawmakers rejected plans to retire the Galaxy aircraft, congressional appropriators did not add back money to pay for the fuel or the manpower to fly them. Similarly, the three B-1 bombers will move into backup status and likely will be used infrequently. The official was not authorized to speak publicly about the budget, so requested anonymity.

The decision to block retirement of some C-130s, however, reveals how narrow, yet critical, the political interests can be. Pennsylvania lawmakers declared victory last month when they reversed the decision to retire eight C-130s and shut down the 911th Airlift Wing near Pittsburgh. Local officials and business owners argued that the base, which uses space at Pittsburgh International Airport, provides an economic boost to the entire community.

Sens. Pat Toomey, a Republican, and Bob Casey, a Democrat, lobbied Pentagon leaders and fellow lawmakers to keep the wing. They argued in a letter to then-Defense Secretary Leon Panetta that "the 911th is a very efficient and cost effective installation" and that closing it could be a waste of taxpayer dollars.

Pentagon officials have also been thwarted in their broader efforts to shut down costly and underused military facilities around the country. Congress rejected the department's request last year for two more rounds of base closings, as lawmakers objected not only to the prospect of taking jobs and dollars out of a region's economy, but also questioned whether closing the facilities actually achieves the promised savings.

Pentagon budget chief Robert Hale acknowledged earlier this month that the department spent $35 billion on the base closure round in 2005, and while it saves $4 billion a year, officials won't break even until 2018. The expense is largely because a number of new facilities were built even as some were merged and closed.

"Would a (base closings) round be effective in providing rapid savings? Unfortunately, history has emphatically told us, no," Rep. Rob Wittman, R-Va., said during a recent hearing on the Base Realignment and Closures program. "I believe that aggressively moving forward with the BRAC round could significantly harm our military power and their ability to project power."

Currently, the department saves about $8 billion a year on the four rounds that were carried out before 2005. The Pentagon has proposed another round in 2014 that Hale said would save $1 billion to $2 billion a year. Pentagon leaders insist that the military still has nearly 20 percent too many bases and facilities.

"There is still excess infrastructure," Assistant Army Secretary Katherine Hammack told the House Armed Services Committee last month. "I was just on one (base) that had 800 buildings and we were utilizing 300 of them."

Perhaps the most significant cost savings historically opposed by Congress are Pentagon efforts to scale back military retirement benefits, including proposals to increase premiums or co-pays for retirees.

"I think there's a misunderstanding in Congress about what it is that would change," Harrison said. "They tend to associate changes in retirement benefits with changes to veterans benefits."

But changes to retiree health care would only affect the approximately 17 percent of the service members who stay in the military long enough to qualify for retirement, and those are usually more senior officers who already have a higher income. Veterans' benefits more often help those with lower incomes, and they are included in the Veterans Affairs Department budget, not the Pentagon's.

Turner faulted department leaders for some of the problems with those broader issues.

"I think on policy shifts you need a more holistic approach, and the Pentagon usually doesn't engage Congress in discussions of finding cuts or program changes. They send them up as missiles for Congress to deal with, instead of using a deliberative approach."

Harrison said the Pentagon needs to do a better job explaining and selling its arguments for such politically unpalatable spending cuts.

"If you actually try to do smart targeted reductions, like closing bases, like actually reducing the size of the workforce, targeted cuts have winners and losers," Harrison said. "And Congress has not been willing to make those tough decisions."

As a result, he said, lawmakers resort to broader, across-the-board cuts, such as the furloughs.

"It spreads pain across evenly," he said. "So everyone can wash their hands of it."