A day before fired FBI Director James Comey is set to again testify behind closed doors with House Republicans, a party leader is predicting that Special Counsel Robert Mueller's case against ex-National Security Adviser Michael Flynn will soon be thrown out of court.

California Republican Rep. Darrell Issa told Fox News' "Sunday Morning Futures" that the FBI had "tricked" Flynn into not having a lawyer and had improperly "post-dated" documents to "morph" them into critical evidence against him. He promised Comey would face tough questioning about the episode.

"Tomorrow is going to be a very different day for Comey, particularly in light of what we've learned -- the misconduct during the Flynn investigation was all about, thanks to a judge that demanded to understand what had happened," Issa told host Maria Bartiromo, referring to U.S. District Judge Emmet G. Sullivan's order last week that led Mueller to turn over key documents in the case.

He continued: "I would not be surprised a bit if the conviction of Flynn is overturned, because of the Justice Department and FBI's misconduct -- and that in fact, we go potentially all the way to the Supreme Court, with new protections -- when the FBI and the Department of Justice lies to someone and tricks them into making statements, and then charges them with a lie they entrapped them in. ... This kind of conduct we haven't seen in a long time."

In explosive court documents filed last week by Flynn's legal team, it was revealed that FBI agents in his case deliberately did not instruct Flynn that any false statements he made could constitute a crime, and decided not to "confront" him directly about anything he said that contradicted their knowledge of his wiretapped communications with former Russian ambassador Sergey Kislyak.

A memo written by then-FBI Deputy Director Andrew McCabe stated that he called Flynn and “explained that I thought the quickest way to get this done was to have a conversation between [Flynn] and the agents only. ... I further stated that if LTG Flynn wished to include anyone else in the meeting, like the White House Counsel for instance, that I would need to involve the Department of Justice."

The court documents also showed that the FBI's interview report documenting Flynn's statements -- known as an "FD-302" -- was dated August 22, 2017, nearly seven months after the actual Flynn interview took place in the White House. Additionally, the 302 that Mueller filed apparently describes an interview conducted by federal authorities on July 19, 2017 not with Flynn, but with Peter Strzok, the agent who led the Flynn interview and said he did not feel Flynn was lying at the time.

Strzok was fired from the Russia probe in late July 2017 -- just days after he apparently gave the interview that formed the basis for the 302 -- for his apparent anti-Trump bias. No audio recording or other transcription of Flynn's comments to the FBI has been produced, and none appears to exist.

It was not clear from Mueller's heavily redacted Friday filing whether a written 302 report of Flynn's interview, which FBI policy dictates should have been written soon after the interview was conducted, ever existed. Mueller was required to turn over all Flynn-related memoranda and documents to the court.

Additional documents released by the Mueller team on Friday in response to Judge Sullivan's order reveal that the decision to interview Flynn about his contacts with the Russian ambassador was controversial within the Justice Department. One FBI document said then-Acting Attorney General Sally Yates “was not happy” when Comey informed her that the FBI planned to talk to Flynn. 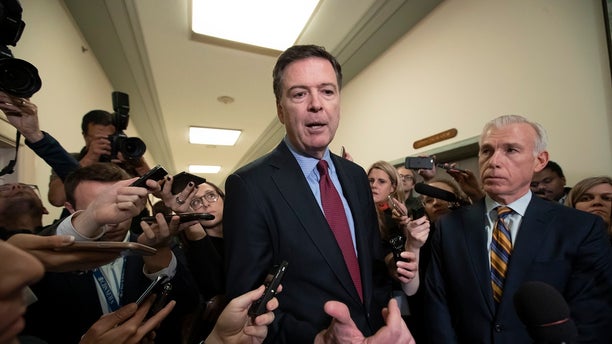 Former FBI Director James Comey, with his attorney, David Kelley, right, speaking to reporters after a day of testimony before the House Judiciary and Oversight committees, on Capitol Hill in Washington on Dec. 7. (AP Photo/J. Scott Applewhite)

Comey admitted last week that he personally directed two FBI agents to break normal protocol by interviewing Flynn at the White House because he felt the FBI could get "away with" it, early on in the Trump administration, which he characterized as disorganized.

Judge Sullivan technically has the authority to void Flynn's guilty plea and dismiss the case against him if he unearths government misconduct, or finds that the plea would constitute a miscarriage of justice that the court should not accept.

Sullivan -- who overturned the 2008 conviction of former U.S. Sen. Ted Stevens after government misconduct came to light -- could take that drastic step if he finds that the FBI withheld exculpatory witness reports from the Flynn team, lacks evidentiary basis for its charge, or improperly coerced Flynn into not bringing a lawyer to his fateful January 2017 interview.

Speaking to "Fox News Sunday" earlier in the day, Trump attorney Rudy Giuliani said Flynn had been "railroaded" and "framed" -- and even though Giuliani acknowledged Flynn had lied to Vice President Pence about his communications with Russia, he said the FBI's conduct was still reprehensible.

"What they did to General Flynn should result in discipline," Giuliani charged. "They’re the ones who are violating the law."

HOW FLYNN WAS PUSHED NOT TO HAVE A LAWYER

In a tweet Sunday, Comey showed no signs of backing down, forcefully condemning President Trump as a "liar" for criticizing federal authorities' raid on his former attorney Michael Cohen.

"Remember, Michael Cohen only became a 'Rat' after the FBI did something which was absolutely unthinkable & unheard of until the Witch Hunt was illegally started," Trump wrote on Twitter early Sunday. "They BROKE INTO AN ATTORNEY’S OFFICE! Why didn’t they break into the DNC to get the Server, or Crooked’s office?"

In April, federal agents raided Cohen's home, office and hotel room as part of their investigation into bank fraud and campaign finance charges he later admitted he had committed. At the time, Trump characterized the move as an "attack on our country" and remarked that "attorney-client privilege is dead."

But later Sunday, Comey emphasized that agents had acted pursuant to a lawful search warrant, and that attorneys are not immune from searches -- especially when they are suspected of engaging in wrongdoing on behalf of clients.

"This is from the President of our country, lying about the lawful execution of a search warrant issued by a federal judge," Comey wrote on Twitter. "Shame on Republicans who don’t speak up at this moment — for the FBI, the rule of law, and the truth."

Any communications with attorneys in furtherance of a new crime are not usually protected by any privilege. A special master was appointed in the case by a federal court judge to ensure that Trump's privileged communications were separated from non-privileged ones.

Cohen, who as Trump's attorney also had the ability to compromise Trump's attorney-client privilege by disclosing their communications himself, was sentenced this week to 36 months in prison.

The former Trump loyalist had earlier claimed in court that he had committed a campaign finance violation "at the direction" of Trump -- although top legal experts and a former Federal Election Commission chairman have said that obtaining a criminal conviction for such alleged violations is often extremely difficult.

Comey testified earlier this month behind closed doors with House Republicans probing his oversight of the Hillary Clinton email probes and the early days of the Russia investigation. He is expected back on Monday for more testimony.

After he was questioned by House Republicans the first time on Dec. 7, Comey derided the GOP -- which will lose the majority in the House in January, and with it their subpoena power -- as hopeless partisans.

"Today wasn’t a search for truth, but a desperate attempt to find anything that can be used to attack the institutions of justice investigating this president," Comey said. "They came up empty today, but will try again. In the long run, it'll make no difference because facts are stubborn things."

A key focus of questioning from lawmakers was Comey's decision to draft the 2016 statement recommending against filing criminal charges in the Clinton email probe before the former secretary of state was even interviewed, as well as the alleged political bias demonstrated in a slew of text messages and leaks by top FBI officials.

"What they did to General Flynn should result in discipline."

But a Justice Department lawyer prevented Comey -- who had briefly sued to avoid testifying behind closed doors, before dropping that effort -- from answering all of the Republicans' questions, according to lawmakers at the hearing.

A 235-page transcript of Comey's remarks and the questions posed to him was later released, pursuant to an agreement between Comey and House Judiciary Committee Chairman Bob Goodlatte, R-Va., and House Oversight and Government Reform Committee Chairman Trey Gowdy, R-S.C.

It showed that Comey claimed “I don’t know” or “I don’t remember” in response to dozens of questions concerning key details about his time as FBI chief.

Asked if he recalled who drafted the FBI’s “initiation document” for the July 2016 Russia investigation, Comey said, “I do not.” He again claimed not to know when asked about the involvement in that initiation of Strzok, whose anti-Trump texts later got him removed from the special counsel’s probe.