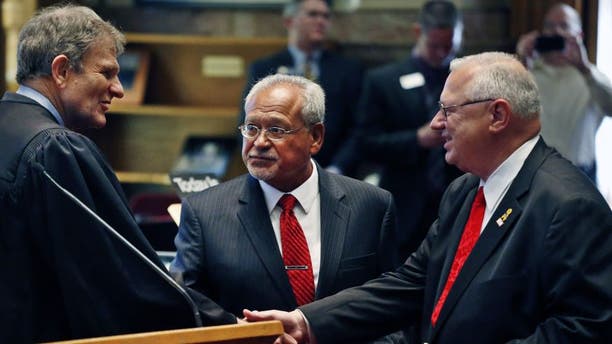 Gun-rights advocates in Colorado have started gathering signatures in support of another recall effort against a Democratic state senator following two successful recalls of lawmakers over votes in support of gun control laws.

Recall organizers received certification Friday from the Colorado Secretary of State’s office to gather signatures in the effort to recall Sen. Evie Hudak, a Democrat from Westminster, Colo., who backed the controversial gun measures, the Denver Post reported.

“She has infringed upon our constitutional right to keep and bear arms. She has voted to make all citizens less safe and to drive hundreds of jobs from Colorado,” Mike McAlpine, a spokesman for the group behind the recall effort, said in a statement emailed to the Denver Post.

In May, a different group suspended a separate recall effort targeting Hudak after they were unable to collect enough signatures. The group must gather 18,900 valid signatures within a 60-day time frame to force the recall question onto the ballot, the newspaper reported.

Hudak received criticism from gun-rights activists earlier this year over remarks she made to a rape victim at a committee hearing on a bill that would ban concealed weapons on public college campuses.

The legislator told Amanda Collins, testified that she may have been able to defend herself during the attack at University of Nevada, Reno, if she had been carrying her gun.

Hudak responded, "I just want to say that, actually, statistics are not on your side even if you had a gun...And chances are that if you would have had a gun, then he would have been able to get that from you and possibly use it against you."

Two Republicans were sworn in last week to replace Sens. John Morse and Angela Giron, the defeated Democrats who remained firm over their support for the new gun laws. The limits on ammunition magazines and expanding background checks to private and online firearm sales were reactions to mass shootings at a suburban Denver movie theater and a Connecticut elementary school last year.

Former Colorado Springs Councilman Bernie Herpin and retired Pueblo police officer George Rivera took the oath of office Oct. 3 in front of a Senate packed with Republican lawmakers and other supporters in the gallery.

The recalls last month marked the first time in state history legislators were ousted from office and reflected the continued debate over what gun restrictions, if any, are needed.

The wins boost the GOP's power in the Senate, narrowing the Democrats advantage in the chamber to an 18-17 margin. Democrats control the House 37-18.

Democrats will have leadership elections in the coming days to select a new Senate President.

Although Democrats still control both legislative chambers, the slim margin in the Senate is sure to make it difficult for the party to continue the aggressive policy agenda Republicans criticized them for this year.