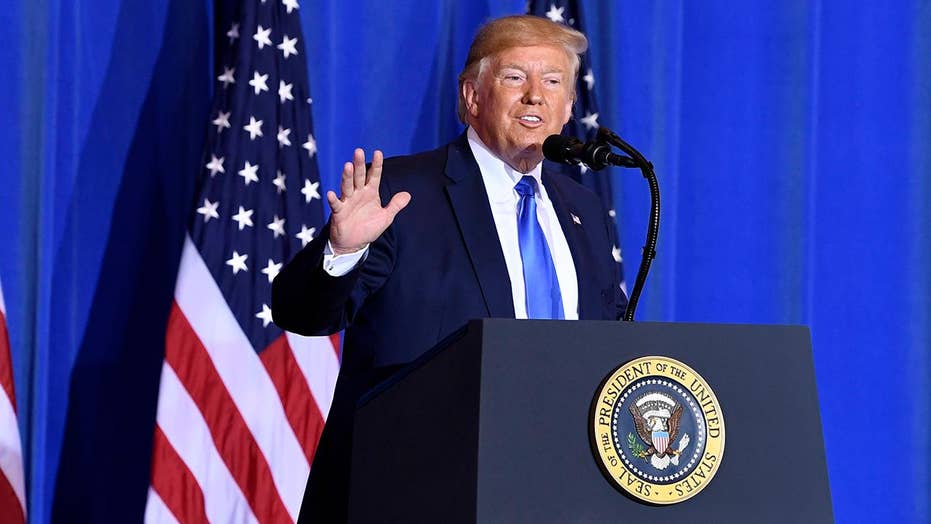 President Trump arrives in South Korea after wrapping up G20 summit in Japan.

Conservative activist Charlie Kirk is launching a massive get-out-the-vote campaign Tuesday aimed at identifying and enlisting 1 million student supporters of President Trump ahead of the 2020 election.

The “Students for Trump” campaign will look to target students on more than 300 campuses, in what Kirk describes as the biggest operation of its kind.

“This is the most aggressive voter identification GOTV program targeting students on college campuses for a Republican president ever,” Kirk told Fox News. “The road to the White House goes straight through college campuses and the left is targeting a lot of their messages on policy directly toward students—student loan forgiveness, unrealistic socialist programs—we’re doing everything we can to make sure Trump does get re-elected.”

The project is affiliated with Kirk's conservative nonprofit Turning Point Action. The Students for Trump push originally was launched last election cycle by conservative commentator Ryan Fournier, who then partnered with Kirk to expand its reach.

Kirk told Fox News that “Students for Trump” has a budget of $15 million, 150 staffers and a presence on more than 1,400 college campuses due to its affiliation with Turning Point Action. He described it as a “nationwide effort” with a “hyper-focus” on key swing states.

Kirk told Fox News that the goal is to “identify” Republicans on campuses and motivate them to the polls with pro-Trump rallies, voter registration events, digital advertising and more.

“We’re going to encourage students to vote in the states where their campuses are,” Kirk said, specifically referring to students at colleges in Florida, North Carolina, Wisconsin, Michigan, Nevada, Iowa, Pennsylvania and Ohio—key states critical to a Trump victory.

“Democrats believe that this is their path of least resistance—that they’ll be able to waltz onto campuses, put their messages across with little to no cross-examination, and what we’re doing is going to be a very large component,” Kirk said.

He'll have his work cut out for him.

According to a Gallup poll from March, only 28 percent of voters between the ages of 18 and 29 approve of the president’s job performance.

And Democratic presidential candidates indeed are openly appealing to students with student loan forgiveness programs and other promises of free or subsidized higher education.

Kirk argued, though, that “Students for Trump” will bring “much-needed sobriety and reality to political promises being made by the left.”

“The probability that these gallivanting politicians will be able to forgive massive student loan debt and deliver free health care is quite low,” he said. “It would add decreased economic mobility and freedom and opportunity, and adding this type of reality is so overdue and needed.”

Kirk added that while it is “very difficult to run up against an entire political party” pushing for student loan forgiveness, he argued that “a large part of the college population includes students who went to community college first and worked their way through college.”

“The majority of students do have student loan debt, but there are a fair amount of students that work and have been paying off their student loans religiously—do they get any form of reimbursement?” Kirk said. “We will target those students in these key states that have worked their way through college—and there are plenty of them.”

Kirk added that the issue of student loan debt forgiveness is being used by Democrats as “a carrot to make more students go vote for them, despite the unrealistic nature of it.”

“We see Trump policies working for young people, whether it be the best economy, lowest unemployment, or wages finally going up for the middle class—we want to get that reality out there in the face of a massive Democrat campaign,” Kirk said. “The battle of ideas is going to be more consequential on college campuses in the next 18 months than I think ever before.”

The president's eldest son is expected to be involved with some of the group's events.

“I am thrilled to see [Kirk] and his successful team focus on motivating and turning our college students to help my father get reelected in 2020,” Donald Trump Jr. said in a statement.

The Students for Trump launch party is scheduled to be held next month in Las Vegas, timed with the start of the fall semester.