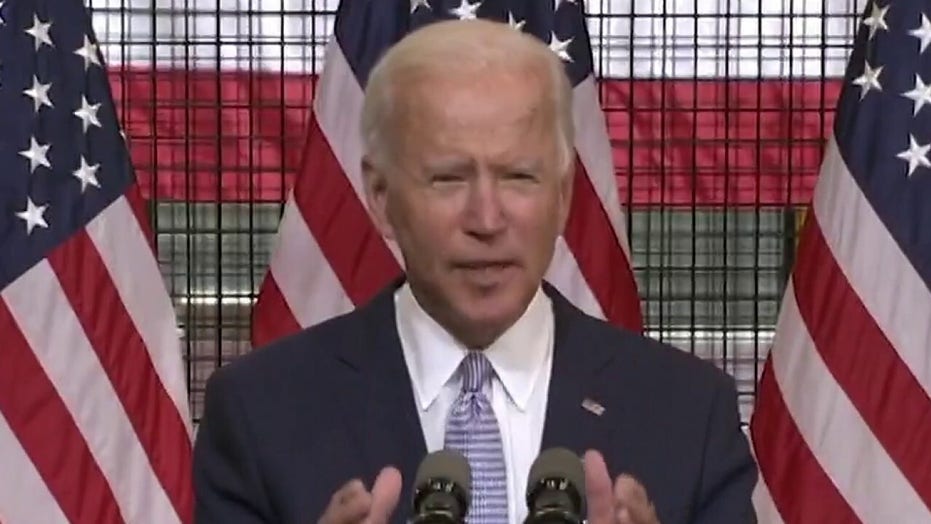 Joe Biden has been put on the defensive by being forced to discuss law and order, an issue where President Trump has an advantage, Washington Times opinion editor and Fox News contributor Charlie Hurt said Monday.

"One of the oldest most basic rules of politics is you don't repeat your opponent's attacks on you," Hurt said on "The Daily Briefing". "Well, Joe Biden has no choice at this point but to repeat the attacks on him right now, and he's having to come out and defend himself. That on its face is a very difficult position for anybody to be in."

Hurt was responding to remarks Biden delivered in Pittsburgh, where he condemned rioting in America's cities and accused the president of fanning the flames of unrest.

"The second thing, is if he's actually talking about this issue, the issue of violence in cities, it's an issue -- that's Donald Trump's briar patch," Hurt said.

A SENATOR CONDEMNED LOOTING, THEN DELETED HIS TWEET. HOW DEMS ARE STRUGGLING TO ADDRESS RIOTS

"That's where, politically speaking, Donald Trump is going to appeal and probably win over a lot of those independent voters," he added. "And the fact that Joe Biden now finds himself having to go there and defend this is I think very difficult for his campaign."

"I thought this speech was the most direct, substantive, and powerfully injurious speech of President Trump's record over the last several years and at the same time laid out a defense of Joe Biden in the immediate terms, which Charlie touched on, but also at the same time, laid out in some fleshing out of some detail what building back America better really means. And that a leader doesn't incite. He leads," Ford said.

"I think today marks not only the best speech that Joe Biden has given in his campaign, but it certainly sought to undo some of the damage that President Trump and many of his allies, the portrait they try to draw of Joe Biden being unresponsive, unable, incapable of handling himself in a very tough speech and a tough moment."