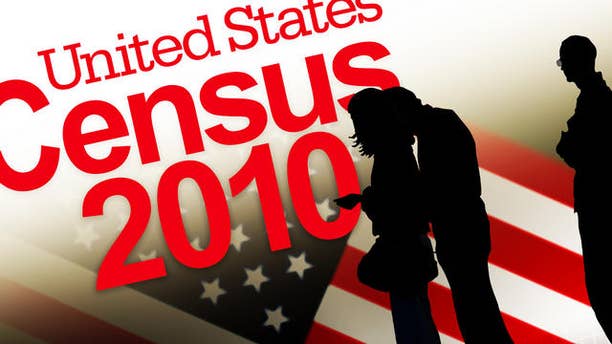 Hispanics grew four times the rate of the general population in the last decade. Mexicans continue to be the single largest group in the Latino population. (AP)

If government estimates hold true, the closely watched 2010 census will show America's once-torrid population growth dropping to its lowest level in seven decades. In Congress, the steady migration to the South and West should be a boon for Republicans, with GOP-leaning states led by Texas picking up House seats.

The Census Bureau expects to release Tuesday the first results from the once-a-decade government count, figures that will be used to reapportion the 435 House seats among the 50 states. The numbers trigger a high-stakes process wherein the dominant party in each state redraws the election map, shaping the political landscape for the next 10 years.

Demographers believe the official 2010 count will be 308.7 million or lower, putting U.S. growth at around 9 percent, the lowest since the 1940 census. That is the decade in which the Great Depression slashed the population growth rate by more than half, to 7.3 percent.

The U.S. is still growing quickly relative to other developed nations. The population in France and England each increased roughly 5 percent over the past decade, while in Japan the number is largely unchanged and in Germany the population is declining. China grew at about 6 percent; Canada's growth rate is roughly 10 percent.

"We have a youthful population that will create population momentum through a large number of births, relative to deaths, for years to come," said Mark Mather, an associate vice president at the Population Reference Bureau, a private firm in Washington that analyzes census data. "But demographers generally expect slower growth in the first decade of the 21st century."

The declining growth rate since 2000 is due partly to the economic meltdown in 2008, which brought U.S. births and illegal immigration to a near standstill compared with previous years. The 2010 count represents the number of people -- citizens as well as legal and illegal immigrants -- who called the U.S. their home on April 1 this year.

Politically, Texas stands to gain up to four seats due to a burgeoning Hispanic population and a diversified economy that held up relatively well during the recession, according to projections by outside analysts using census estimates. Other expected winners are GOP-leaning Arizona and Florida, which could add one or two seats.

Ohio and possibly New York were projected to lose two seats, typifying many of the Democratic strongholds carried by Barack Obama in 2008 that are expected to see declines in political influence. For the first time in its history, Democratic-leaning California will not gain a House seat after a census -- and is at a slight risk of losing one -- after losing many of its residents in the last decade to neighboring states.

On Monday, White House press secretary Robert Gibbs sought to downplay the possibility that 2010 census results would be a boon for Republicans. "I don't think shifting some seats from one area of the country to another necessarily marks a concern that you can't make a politically potent argument in those new places."

The projections do not account for overseas U.S. military personnel and their families, who are typically counted at military bases in the U.S. The Census Bureau obtains Pentagon records on overseas military and adds them to the resident count before allocating the House seats. In 2000, North Carolina beat out Utah for the last House seat because of its strong Army presence.

In all, roughly 18 states would be affected, gaining or losing seats. Among the projections:

--Georgia, Nevada, South Carolina, Utah and Washington would each gain a single seat.

--The fastest growing states include Nevada, Arizona and Utah. The slowest-growing include Michigan, Louisiana and Rhode Island.

The stakes are high. States on the losing end Tuesday may have little recourse to challenge the numbers. Still, census officials were bracing for the possibility of lawsuits seeking to reverse the 2010 findings, according to internal documents.

The release of state apportionment numbers is the first set of numbers from the 2010 census. Beginning in February, the Census Bureau will release population and race breakdowns down to the neighborhood level for states to redraw congressional boundaries.

Louisiana, Virginia, New Jersey and Mississippi will be among the first states to receive their redistricting data next February.

The 2010 census results also are used to distribute more than $400 billion in annual federal aid and will change each state's Electoral College votes beginning in the 2012 presidential election.