Carson says no 'path forward' after primary losses, will not attend GOP debate 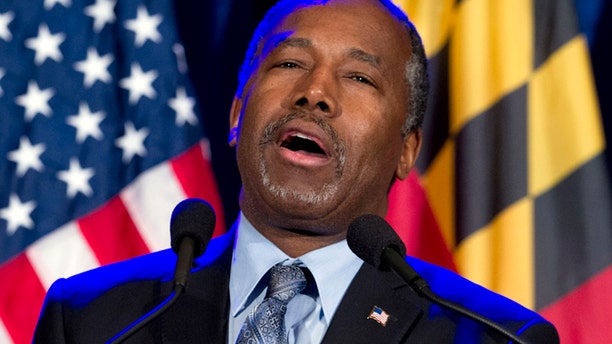 Republican presidential candidate Ben Carson announced Wednesday that he sees no “political path forward” after his Super Tuesday losses -- and will not attend the upcoming Fox News debate.

The retired neurosurgeon did not officially suspend his campaign, saying he’ll discuss the “future of this movement” during a speech Friday at the Conservative Political Action Conference.

But he made clear he’s stepping to the side as the four other Republican candidates continue to wage a battle for the GOP nomination.

“I have decided not to attend the Fox News GOP Presidential Debate tomorrow night in Detroit,” he said in a statement Wednesday. “Even though I will not be in my hometown of Detroit on Thursday, I remain deeply committed to my home nation, America. I do not see a political path forward in light of last evening’s Super Tuesday primary results.

“However, this grassroots movement on behalf of ‘We the People’ will continue. Along with millions of patriots who have supported my campaign for President, I remain committed to Saving America for Future Generations.”

Carson enjoyed a surge in the polls last year, at one point becoming competitive with Donald Trump. But his numbers later plunged, and he has not won a single contest; he was solidly in last place in the delegate count following Super Tuesday.

Should he formally suspend his campaign, it's unclear where his supporters would go.

Carson entered the political spotlight in 2013 when at the National Prayer Breakfast he tore into the Affordable Care Act just feet away from President Obama, gaining fame among conservatives in the process.

He announced his decision to run for the White House in May from his hometown of Detroit.

Carson was the consummate outsider candidate – a non-politician who forged an illustrious career in medicine, far removed from the Washington world of lobbyists and lawyers. Known for his affable, soft-spoken, and sometimes-awkward speaking style, he was an unpredictable presence on the debate stage and at rallies.

He also largely avoided tangling with the other contenders, and on Tuesday had even called for a meeting of the candidates to discuss the tone of the race.