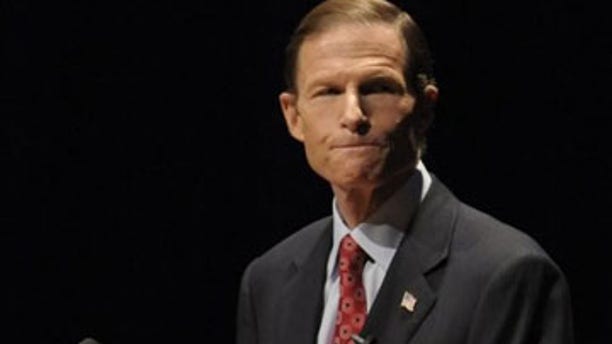 WEST HARTFORD, Connecticut -- The admission by Senate candidate Richard Blumenthal that he "misspoke" when he claimed he served in Vietnam has bolstered Republican hopes they can capture a seat once seen as a lock for Democrats.

Democrats, meanwhile, stood by the popular state attorney general, one of Connecticut's most well-known politicians, saying he had never intentionally deceived anyone about his military service as a Marine Reserve who never served outside the United States.

At a news conference Tuesday where he surrounded himself with veterans, Blumenthal said he meant to say he served "during" Vietnam instead of "in" Vietnam. He said the statements were "totally unintentional" errors that occurred only a few times out of hundreds of public appearances.

"On a few occasions, I have misspoken about my service and I regret that. And I take full responsibility," said Blumenthal, a trim, square-jawed figure with the bearing of a military man. "But I will not allow anyone to take a few misplaced words and impugn my record of service to our country."

The crisis erupted when The New York Times reported that Blumenthal had repeatedly distorted his military service. The story included quotations and a video of Blumenthal saying at a 2008 event that he had "served in Vietnam." The newspaper also said Blumenthal intimated more than once that he was a victim of abuse heaped on Vietnam veterans upon their return home.

Asked if there was pressure from her fellow Connecticut Democrats to urge Blumenthal out of the race, party chairwoman Nancy DiNardo said "Absolutely not."

Blumenthal is the front-runner to replace retiring Democrat Christopher Dodd in the U.S. Senate, and the revelations of his misstatements come days before Democrats meet this weekend to endorse a candidate for the seat. Polls in recent days showed Blumenthal leading his Republican challengers in hypothetical head-to-head matchups by 30 to 40 percentage points.

Given the stakes for both sides -- the tough environment for Democrats, and the Republicans' determination to retake control of the Senate by picking up 10 seats -- the Democrats moved quickly to contain the damage, circulating videos showing the candidate being careful to portray his Vietnam service accurately.

In a televised March debate, Blumenthal stated clearly he had not actually served in Vietnam during the war when asked a question about using military force in Iran.

"People know him, they know he has a strong record of fighting for people in Connecticut for a long time," said Chris Kofinis, a Democratic consultant in Washington. "People, I think, are forgiving."

Dodd called Blumenthal "an honorable man who has served his state and country proudly" and "will be a great United States senator."

Yet some Democrats acknowledged privately on Tuesday that they're in shock by the allegations, especially so close to the convention, and are waiting to see how the situation plays out.

"I know that it's a pretty liberal state and it's going to take a lot to wear his poll numbers down, but I think it will be an issue for some voters and it will tighten the race up," said Gary Rose, a political science professor at Sacred Heart University in Fairfield.

Blumenthal, 64, received at least five military deferments that enabled him to stay out of the war between 1965 and 1970, during which time he went to Harvard, studied in England and landed a job in the Nixon White House. Once he secured a spot in the Marine Reserve, he had almost no chance of being sent to Vietnam, the newspaper reported.

One of Blumenthal's Republican opponents, former WWE professional wrestling executive Linda McMahon, claimed to have given video of the Norwalk event to the Times after more than two months of "deep, persistent" research.

The Democratic Senatorial Campaign Committee said it was not surprised that McMahon's campaign "cherry-picked" the quotes, "considering all of the debauchery" at the WWE, known for wild, dramatic wrestling matches, under her watch. DiNardo, the state party chairwoman, called the accusations "the lowest kind of political smear."

Blumenthal is widely known for his dedication to veterans issues, attending numerous funerals and military sendoffs. He has spoken at hundreds of events, many times about the mistreatment veterans received after returning from Vietnam. Blumenthal is also known as a straight-arrow and a man of integrity.

"People are going to look at him differently," said John Feehery, a Republican consultant in Washington. "For someone like him it's even worse, because he's got this squeaky-clean image."

Blumenthal bristled at the way the Times characterized his military record, saying the story "really implies that there was kind of special favors or treatment involved in my entering the reserves, which is in fact completely untrue." He said he joined the Reserve by looking it up in the phone book and calling, and added that there were no guarantees that he wouldn't be sent to Vietnam.

"A lot of people were making different choices during that period. Some people decided not to serve. I could have continued in the White House with a deferment," he said. "I wanted to move on with my life. I wanted to serve the country, and I'm proud of the fact that I made that decision and served and reached the rank of sergeant in the Marine Corps reserves."

Veterans who stood behind him at the podium at the Veterans of Foreign Wars post in West Hartford said Blumenthal's commitment was without question.

"I'm here today because I couldn't let these malicious, deceptive charges against my good friend Dick go unanswered," said Peter Galgano, a spokesman for the Marine Corps League of Connecticut. Galgano said he had seen Blumenthal speak at dozens of veterans events and he was always "completely straightforward about his honorable service."

Another Republican opponent, former Rep. Rob Simmons, a Vietnam veteran, said he had not heard Blumenthal make any misstatements, but added: "He owes an apology to those whose service he has undeservedly capitalized on for his own political purposes."