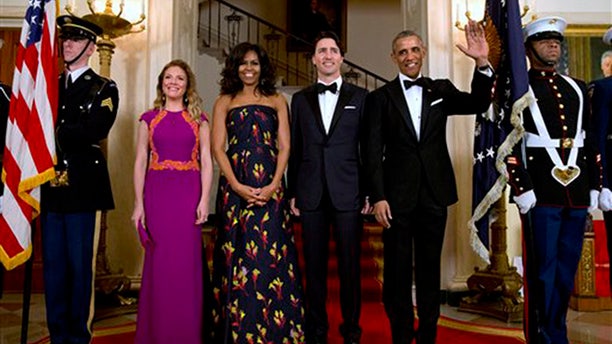 Canadian Prime Minister Justin Trudeau brought "Trudeaumania" to America on Thursday and the verdict was a resounding thumbs-up.

"Breath of fresh air," ''impressive" and "very impressive" was how some of the guests at a splashy White House state dinner in Canada's honor described the country's new leader. Trudeau is the boyish-looking, 44-year-old son of a former Canadian prime minister.

"He's cool," said actor Michael J. Fox, who was born in Edmonton. Fox declared himself a fan of Trudeau'sfather, Pierre Trudeau, whom he described as the "coolest world leader going. He seems to be pretty cool, too," Fox said of the younger Trudeau.

"When I lived in Canada, Pierre Trudeau was my prime minister for 14 years and he's my hero," said actor Mike Myers, who sported a head of snow white hair for his first White House state dinner, the first for Canada in nearly 20 years. "Now I'm thrilled to have his son as my prime minister. I think it's going to be a great time for Canada and a great time for Canadian-U.S. relations."

More than 170 guests sporting tuxedos and designer gowns filed in for dinner in the East Room, which was transformed by the addition of cascading arrangements of blooming orchids, hydrangeas and amaranth in shades of green and white intended to evoke the coming of spring — much like Trudeau's election in October has ushered in a new season in Canadian politics.

"I'm extremely proud of Canada," said actress Sandra Oh, formerly of "Grey's Anatomy," who was born in Ottawa, the Canadian capital. "Obviously, he carries the legacy of one of our greatest prime ministers so I'm extremely excited to meet him."

Sen. Patrick Leahy, D-Vt., said he was not the least bit surprised by the hubbub over Trudeau; the senator lives about an hour away from the border.

The guest list featured a hefty dose of Canadian star power from actors Fox, Myers, Oh and Ryan Reynolds, along with "Saturday Night Live" creator Lorne Michaels. Professional sports were represented by the U.S. hockey and basketball commissioners, along with retired NBA player Grant Hill and his wife, Tamia, a Canadian singer. Leahy and a few other Democratic senators were joined by Republicans Susan Collins of Maine and Orrin Hatch of Utah.

Like at previous state dinners, political donors made the guest list, too. Adam Silver, commissioner of the National Basketball Association, contributed $3,500 to Obama's 2012 re-election campaign and $2,700 more recently to Hillary Clinton's 2016 presidential run.

The menu was also designed with spring in mind: halibut casserole with spring vegetables; salad with apricots roasted in ginger, cardamom and White House honey; and herb-crusted Colorado lamb drizzled with a Canadian whiskey sauce.

The dessert cake was made with toasted Texas pecans and New England maple syrup, and was accompanied by a separate hand-crafted sugar sculpture inspired by the Rocky Mountains and bearing an assortment of petite pastries with American and Canadian influences.

Toasting Trudeau, Obama said, "Here in America, you may well be the most popular Canadian named Justin" — a reference to Canadian-born pop star Justin Bieber.

Trudeau reciprocated by paying tribute to Malia and Sasha, saying he admired them and advising them that their remarkable childhood will give them "extraordinary strength and wisdom" for the rest of their lives.

Sara Bareilles, a favorite of Mrs. Obama and known for her hit, "Love Song," was headlining the after-dinner entertainment.

Trudeau took office in November and carries one of the most famous names in Canadian political history. His late father was prime minister for the better part of 16 years, between 1968 and 1984, and remains the rare Canadian politician who is recognized in America.