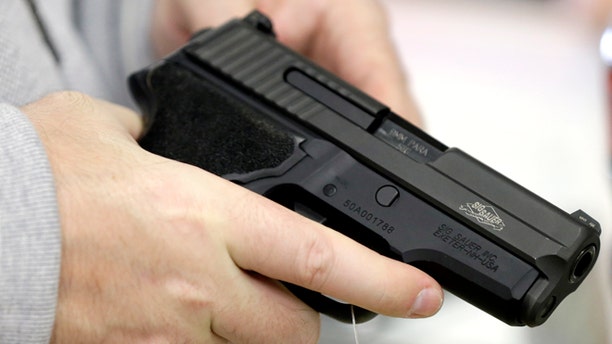 David Foley holds a handgun while shopping at the Spring Guns and Ammo store Monday, Jan. 4, 2016, in Spring, Texas. President Barack Obama is making good on his pledge to politicize gun violence. The package of gun-control executive actions Obama will formally announce Tuesday has pushed the contentious issue to the forefront of the 2016 presidential campaign, just weeks from the Feb. 1 Iowa caucuses.(AP Photo/David J. Phillip) (AP)

Gun rights groups have filed a petition with the Supreme Court in the hopes that it would consider a controversial appeals court decision that limits where gun stores can open within one county in California.

Businessmen John Teixeira, Steve Nobriga and Gary Gamaza joined the Calguns Foundation, Second Amendment Foundation and California Association of Federal Firearms Licensees in the lawsuit first filed in 2012 that challenged an ordinance in Alameda County that prohibits gun stores from being located within 500 feet of areas that include a residentially zoned district.

Teixeria and his colleagues claim the law prevented them from opening a gun shop in San Lorenzo. The plaintiffs maintain in their appeal that this zoning law is a violation of Second Amendment rights.

Teixeira and company also said they determined there was not a single lot within the county that met the ordinance’s requirement of 500 feet.

“Local neighbors who live eight lanes across an interstate and the anti-rights politicians that cater to them can't redline gun stores and the right to buy arms out of existence,” Calguns Foundation Chairman Gene Hoffman said in a statement also provided to Fox News. “Since this case was filed multiple local city and county governments have used unconstitutional zoning laws to stop new gun stores from opening and close down existing gun stores. If this was a bookstore or an abortion clinic, the Ninth Circuit would not have hesitated in striking this zoning regulation unanimously.”

Back in October, an 11-judge panel in the court of appeals upheld the county ordinance with a majority saying in their ruling that the law did not violate the Second Amendment right to bear arms of would-be gun owners because there were other stores in the county where they could buy a gun.

“Gun buyers have no right to have a gun store in a particular location, at least as long as their access is not meaningfully constrained," Judge Marsha Berzon said at the time.

The majority also rejected the argument that gun sellers' Second Amendment rights were violated, saying there is no constitutional right to sell guns.

The ruling overturned a decision made the previous year by a three-judge panel of the 9th Circuit that said the Second Amendment extends to gun stores and requires governments to justify restrictions on them.

That panel in a 2-1 decision said Alameda County had to present evidence to justify the restriction on gun store locations.