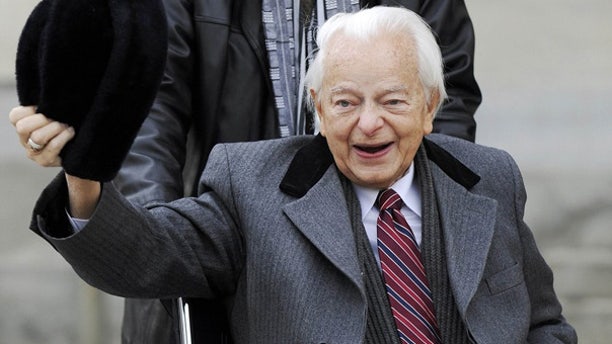 Feb. 2009: Sen. Robert Byrd doffs his hat for reporters as he arrives at the Capitol in Washington. (Reuters)

The death of the Senate's longest-serving member has diminished the chances of the landmark financial overhaul bill coming to a vote this week.

Sen. Robert Byrd, D-W.Va., died early Monday at age 92. He was admitted to a Washington-area hospital late last week for what was thought to be severe dehydration and heat exhaustion brought on by this summer’s near triple-digit temperatures. His office put out a statement Sunday, hours before his death, saying his condition was far more serious.

His death could have one immediate impact -- decreasing the chances of the Senate voting on the financial regulatory bill this week. Senate Democrats have only a razor-thin margin for passing the bill, final language of which the Senate and House agreed to last week. It remains unclear whether Senate Democrats have the 60 votes needed to fend off any Republican efforts to block voting on the measure.

There are 59 Democrats and independents who caucus with the Democrats in the Senate. Two Democrats, Sens. Maria Cantwell of Washington and Russell Feingold of Wisconsin, voted against the financial overhaul bill when it was on the Senate floor in May, and they aren’t expected to change their votes. Feingold released a statement Monday saying the bill would not prevent another crisis.

"The conference committee's proposal fails that test and for that reason I will not vote to advance it," he said.

That means Democrats would only have 56 of the 60 votes needed to invoke cloture on the bill. Four Republicans, Scott Brown of Massachusetts, Olympia Snowe of Maine, Susan Collins of Maine, and Charles Grassley of Iowa, voted for the bill in May, and Democrats would need the four to back it, in order to get exactly 60 votes. Brown on Friday said he was concerned about a bank assessment Democrats added to the bill last week, and his vote is now considered more uncertain.

As long as Republicans remain united, there can be no extension of unemployment insurance benefits or other safety net bills, if they are not offset by spending cuts.

Democrats are hoping to have the financial overhaul package agreed to by a "conference" of lawmakers last week up for a vote in the House of Representatives on Tuesday and possibly up for a vote in the Senate as soon as Thursday. If the measure passes both chambers, President Obama could sign it into law before July 4. If the measure isn’t passed by then, it likely won’t see votes until at least the middle of July.

Fox News' Trish Turner and The Wall Street Journal contributed to this report.