Sen. Cruz on immigration crisis: Biden is 'captive' to AOC and Sens. Warren and Sanders

Sen. Ted Cruz, R-Texas, argued on "America Reports" Thursday that President Biden "caused the border crisis we are seeing right now" through his immigration actions during his first week in office.

The Republican senator, who has recently visited the southern border, added the situation is "one example of the extreme partisan failure" of the Biden administration.

"Joe Biden made the strange choice to pivot hard left," he added. "I think he is captive to AOC [Alexandria Ocasio-Cortez] and Elizabeth Warren and Bernie Sanders."

Biden has scrapped a number of former President Donald Trump's policies, which included having asylum seekers remain in Mexico instead of staying in the U.S. while they wait for their cases to be heard. The moves have led to a record surge in migrants, including unaccompanied minors, that has strained capacity at immigration facilities in recent weeks.

Cruz told "Fox & Friends" on Wednesday he witnessed a manmade "humanitarian disaster and crisis" during the trip he took to the southern border last week.

A Biden spokesperson did not immediately respond to Fox News’ request for comment.

"I've been to the border many, many times over the past ten years and I've never seen it even close to this bad," Cruz said. "The numbers are through the roof and it is the direct result of decisions Joe Biden made in his very first week as president." 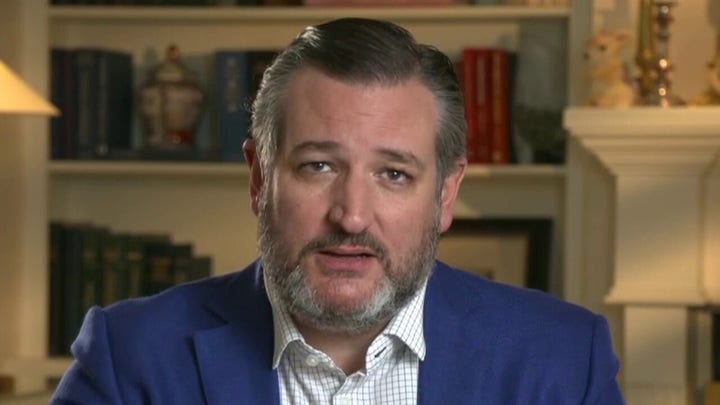 He said halting construction on the border wall, as well as Biden's decision to reinstate "the failed ‘catch and release’ policy," has added to the problem.

"That results in people being apprehended and given a court date sometime in the future and let go and inevitably most of them never come back," Cruz said.

He then highlighted what he called the most important decision contributing to the surge: ending the "Remain in Mexico" international agreement.

The policy, formally known as the Migrant Protection Protocols, involves migrants who arrive at the southern border and claim asylum. The Trump administration established the policy in January 2019, which called for returning migrants to Mexico to await their hearings instead of being allowed into the United States.

"Last year, we had the lowest illegal immigration in 45 years and on week one, Joe Biden ripped that agreement to pieces and caused the border crisis we’re seeing right now," Cruz said.