The U.S.-Mexico border has been closed since March 2020 because of the pandemic and it’s not known when it will reopen. However, it’s forcing cartels to change their drug trafficking tactics as they’re now recruiting American’s to do the job.

Border Patrol agents recently apprehended a number of convicted sex offenders and Mara-Salvatrucha, or MS-13, gang members, as criminals continue to try to enter the U.S. in the ongoing migrant surge across the southern border.

Agents in Kingsville, Texas, last week arrested an MS-13 gang member attempting to hide in a vehicle. A routine check discovered he had been arrested in South Carolina in 2007 for conspiracy to commit murder and aid racketeering, for which he was found guilty and sentenced to 10 years in prison.

MS-13 was set up in Los Angeles by Central American immigrants and has expanded across the Americas — particularly in Northern Triangle countries like El Salvador and Guatemala. The gang is known for its particularly horrific and gruesome crimes, and its motto is said to be "mata, viola, controla," which means "kill, rape, control."

Also on Friday, agents in McAllen, Texas, stopped a Tango Blast gang member who Customs and Border Protection (CBP) officials said has an "extensive criminal history" in the U.S.

A day later, agents processed a Mexican national who had been arrested in Houston in 2008 for sexual assault of a child between the ages of 14 and 17, and had been convicted.

On Wednesday, agents found an MS-13 gang member among a group of 53 migrants, mainly families, entering the U.S. near Hidalgo, Texas. Later, in another group of migrants, agents encountered a Salvadoran among a group of 17 migrants who had a previous conviction for third-degree rape, for which he served six years probation and was previously removed from the U.S.

Border Patrol agents have regularly encountered gang members and sex offenders – including child sex offenders – among those sneaking across the border. In some cases, those criminals are discovered in groups where unaccompanied children are also traveling.

BORDER PATROL NABS GANG MEMBERS, INCLUDING MS-13, ATTEMPTING TO ENTER US AS PART OF MIGRANT WAVE

More than 180,000 migrant encounters took place in May alone, and it is unclear how many have managed to go undetected by overwhelmed agents. Agents have previously told Fox News that smugglers will dump unaccompanied children in one area, so adults can sneak past busy agents in another — including through incomplete parts of the border wall. 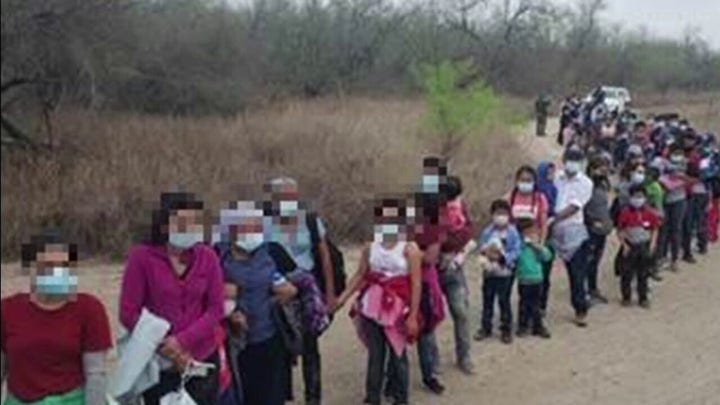 This week, agents in the Rio Grande Valley arrested two sex offenders with convictions of crimes against children. One, apprehended in Roma, Texas, on Monday, was a Peruvian national arrested for multiple accounts of sexual abuse of a child. He was convicted in 2015 of felony rape of a child under 16 years, and was sentenced to six to 14 years in jail, and was deported in 2020.

On Tuesday agents in Brownsville, Texas, arrested a 44-year-old Mexican who had been arrested in 2014 for aggravated assault of a child. He pleaded guilty to a lesser charge of indecency with a child and sentenced to five years before being deported in 2018.

Also on Tuesday, Border agents in Yuma, Arizona, arrested a Mexican sex offender as he entered the U.S. Routine checks revealed he had a conviction for indecency with a child in El Paso, for which he was sentenced to two years in prison.