Boom Time or a Broken Industry? Auto Companies One Year After the Bailout... 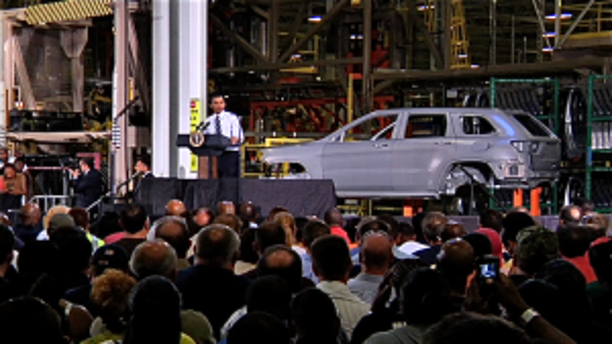 President Obama came to Michigan to tout the success of the auto industry and the economic boom he says its playing in restoring the economy. But, in Detroit, unemployment remains high and while the big three auto companies continue to improve, they are not yet back to their old powerhouse-selves.

Obama, speaking at the Chrysler plant that churns out the Jeep Grand Cherokee, told the audience of auto-workers his approach to getting the auto industry back on its feet was "hands-off" and that he never wanted the federal government to get into the auto business, but he did want the industry to succeed. "There were a lot of folks in Washington who said it couldn't be done. But I believed that if each of us were willing to work and sacrifice in the short term -- workers, management, creditors, shareholders, retirees, communities -- it could mark a new beginning for a great American industry," Obama said. "And if we could summon that sense of teamwork and common purpose, we could once again see the best cars in the world designed, engineered, forged, and built right here in Detroit, right here in the Midwest, right here in the United States of America."

Last year the Obama administration, following on steps taken by the Bush White House, came up with a plan that would help the auto companies by allowing them to borrow federal money through the TARP (Troubled Asset Relief Program) and would enable GM and Chrysler to continue operations without declaring bankruptcy and falling under. The third of the "Big Three" as they are known, Ford, did not take government assistance instead choosing to create their own way out of their crisis.

Both GM and Chrysler appear to be ready to shake loose the bonds of the government association, with GM trying to create an I.P.O. (Initial Public Offering) sometime this year. The company had originally intended to have the I.P.O. ready by summer, but that seems unlikely. Ford, continues to grow on their own, but the CEO Alan Mulally maintains that the bailout helped all of the big three companies because it saved the manufacturers of the parts - without whom all three would have gone under. However, Mulally disputes the idea there's a competitive disadvantage now between Ford and GM and Chrysler because Ford did not take government help.

“I don’t think we really are disadvantaged, because people ask us about the debt. Because clearly when GM and Chrysler went through bankruptcy, that they shed a lot of their debt. Well, we took on the loans to transform Ford, and now, as we’re profitable and generating free cash flow, we’re actually paying back the loans, which is fantastic,” Mulally told Fox News’ Neil Cavuto. “And the good will for us not taking precious taxpayer money and actually running a healthy business and creating products that people want, I wouldn’t trade our position.”
The White House, while pleased with the progress by both GM and Chrysler, is quick to point out that while the two companies received government help, their success is their own.
“We now have these companies thinking long term. They understand this is not a next year, year after issue. This is a long-term bet that they're making on the direction of the industry,” Ron Bloom the Senior Adviser to the Treasury Secretary told reporters at the White House on Thursday. “That bet is going to take a while to pay off, but I think we should be applauding their willingness to try to look ahead, because for a lot of years people said the companies wouldn't look ahead, they always tried to fight the future. Now we have companies trying to shape the future. “
Bloom says the White House chooses to focus on the positives in the auto industry, even while joblessness in the car capital of the U.S. continues to remain high.

Unemployment in Michigan is 13% and Detroit’s unemployment rate is one of the highest in the state at 14.3%. The 1200 jobs added at the Chrysler plant near downtown Detroit is welcome news even by republicans. But, Representative Pete Hoekstra, R-Mich., who is running for governor, says while Michigan is grateful for jobs, he’s not convinced the White House policy will help in the long run. “Massive investment in a couple of plants, doesn’t signal turnaround,” Hoekstra told Fox.
Hoekstra’s colleague in the House of Representatives, Thaddeus McCotter, R-Mich., who represents Lansing, says he’s aware recovery may take longer in a manufacturing state like Michigan, but that the president’s efforts to re-structure the car companies is misguided. “What the President doesn't understand is the one entity in America that refuses to restructure for the future is the federal government. Because the administration just keeps on making it bigger, more bloated and more expensive and that is a lesson he has clearly not learned of the mistakes made in the 1970's with our auto companies- fortunately, we have,” McCotter told Fox News.
And, Hoekstra says despite the efforts by the White House to proclaim Obama’s visit a trip about autos, there’s definitely a political tinge.
“The president is touting jobs the government created because Carolyn Cheeks-Kilpatrick is on the appropriations committee. Why else would he come to the same state in two weeks?” Obama was in Holland, Michigan July 15 making remarks at Compact Power, a battery plant.
Kilpatrick is running for re-election to the House seat in Michigan’s 13th district, in what Hoekstra describes as a tough fight and Hoekstra calls the Obama visit to Detroit “pure politics, plain and simple”.