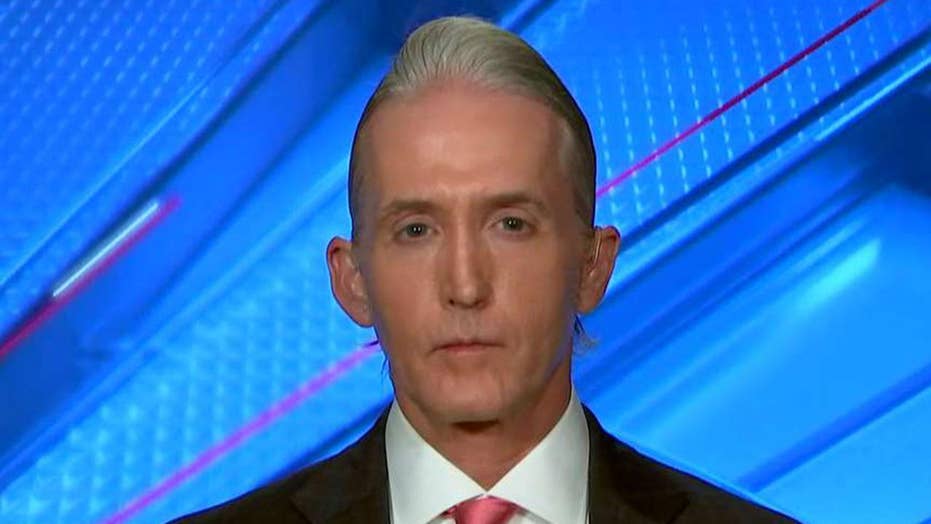 Gowdy: Mueller needs to be asked what he didn't look into

Fox News contributor and former House Oversight Committee chairman Trey Gowdy on what questions Robert Mueller should be asked during his congressional hearing.

Weary or not, here he comes.

Robert Mueller, the former Trump-Russia special counsel who has already said he will not testify beyond boundaries of his novel-length report into Russian election interference, is set to appear for several hours of hearings before two House panels on Wednesday.

For Democrats, who have fretted that many Americans never read Mueller's full 448-page report, Mueller's appearances before the House Judiciary and House Intelligence Committees will be an opportunity to again shine the national spotlight on Mueller's lengthy, and deliberately inconclusive, investigation into whether President Trump obstructed justice. Members of the Democrat caucus were holding mock hearings throughout the day Tuesday to prepare.

Republicans, however, have accused Democrats of "beating a dead hoax." GOP representatives said they wanted to ask when Mueller had determined there was no evidence the Trump team colluded with Russia -- and why Mueller entirely failed to probe apparent surveillance abuses by FBI and DOJ officials in the process.

Another expected area of focus: why Mueller decided not to make any determination on obstruction of justice, and whether it was appropriate for Mueller's report to provide an in-depth accounting of embarrassing White House episodes that never led to criminal charges.

FILE - In this May 29, 2019, file photo, Special counsel Robert Mueller speaks at the Department of Justice in Washington, about the Russia investigation. (AP Photo/Carolyn Kaster, File)

Drama marked the hours leading up to the hearing, when in an extraordinary letter late Tuesday, House Intelligence Committee Chairman Adam Schiff, D-Calif., wrote to Mueller to instruct him to disregard the guidance the DOJ issued to him on Monday.

Attorney General Bill Barr told Fox News on Tuesday that it was Mueller’s team who asked the Justice Department to send Mueller a letter telling him to keep his upcoming testimony to House lawmakers "within the boundaries" of the public version of his Russia probe report.

Schiff, in his letter to Mueller, asserted that “the DOJ Letter attempts unduly to circumscribe your testimony and represents yet another attempt by the Trump Administration to obstruct the authorized oversight activity and legitimate investigations of the Committee."

Schiff added: "The Committee categorically rejects the Department’s overly expansive and baseless “prophylactic” assertion of executive privilege in all its various forms.  Accordingly, I fully expect that the DOJ Letter will have no bearing on your testimony before the Committee tomorrow."

But at a rare public appearance in May, Mueller said that he would never testify about anything outside the boundaries of the report.

"I would spend almost all of my time asking him about things he did not bother to look for."

“There has been a discussion about an appearance before Congress. Any testimony from this office would not go beyond our report,” Mueller said. “It contains our findings and analysis, and the reasons for the decisions we made. We chose those words carefully and the work speaks for itself.”

Nevertheless, lawmakers will press Mueller to break his own pledge. Republicans will ask about the discredited dossier of opposition research compiled by a former British spy that was funded by the Hillary Clinton campaign and repeatedly cited by the Justice Department in its application for a secret surveillance warrant on a former Trump campaign associate -- despite numerous apparent problems in the document's reliability.

Several issues with the dossier were even brought to the FBI's attention before it cited the dossier in its Foreign Intelligence Surveillance Act (FISA) court application and subsequent renewals. Mueller's report made plain, for example, that then-Trump lawyer Michael Cohen did not travel to Prague to conspire with Russian hackers seeking to access Democrat files, as the dossier alleged.

Mueller also was unable to substantiate the dossier's claims that former Trump aide Carter Page had received a large payment relating to the sale of a share of Rosneft, a Russian oil giant. There was also no evidence of a lurid tape that could be used to blackmail Trump, or a complex Russian interference effort run out of a nonexistent Russian consulate in Miami that employed Trump-loyal hackers, as Steele promised.

Republicans will press Mueller on Peter Strzok, the former FBI counterintelligence agent who routinely badmouthed Trump over text message even as he was helping lead an investigation into the campaign. Mueller fired him once the texts were discovered two years ago, but Strzok's name has repeatedly surfaced amid the ongoing DOJ review into FBI misconduct during the 2016 presidential campaign. Strzok's phone from his days on Mueller's team was conspicuously wiped clean by DOJ officials.

Former House Oversight Committee Chairman Trey Gowdy, now a Fox News contributor, told Fox News' "Hannity" late Tuesday that Mueller "doesn't want to be there," and "is not gonna deviate from the report."

"Let's assume he does say something new or different tomorrow," Gowdy said. "Your follow-up question is gonna be, well, why the hell is that not in your report?"

Still, Gowdy said, Republicans can try to seek some answers as to why Mueller avoided investigating FISA abuses and other matters -- and, Gowdy asserted, Mueller would likely blame Rod Rosenstein, the former deputy attorney general.

"I would spend almost all of my time asking him about things he did not bother to look for, such as the origin of this investigation in June of 2016 -- that's where I would spend my time," Gowdy said, referring to the FBI's counterintelligence probe into the Trump campaign.

Gowdy added: "It's interesting to me whether or not you can even obstruct an un-predicated investigation. Can you even obstruct something that never even should have begun?"

Mueller is also likely to be asked about his own tensions with Barr over how the report was handled and how its findings were communicated to the public. Mueller complained privately to Barr in March that the attorney general's four-page letter summarizing the main findings of his report "did not fully capture the context, nature and substance of this office's work and conclusions."

Barr, in turn, has called Mueller's note "a bit snitty."

Although the day could turn out to be a predictable retelling of his report, Mueller sprang some surprises on the White House at the eleventh hour. On Tuesday, Democrats granted Mueller's request to have his top aide in the investigation, Aaron Zebley, sit at the table with him. Zebley will be able to answer questions before the intelligence committee, where, a committee aide said, he will be sworn in.

Trump derided the decision as “unfair” and a “disgrace to our system.”

“Just got back only to hear of a last minute change allowing a Never Trumper attorney to help Robert Mueller with his testimony before Congress tomorrow,” Trump tweeted. “What a disgrace to our system. Never heard of this before. VERY UNFAIR, SHOULD NOT BE ALLOWED. A rigged Witch Hunt!”

Republicans have spoken out against the last-minute change, calling it an “apparent stunt” by Democrats. Rep. Doug Collins, R-Ga., the Judiciary panel’s top Republican, said the move “shows the lengths Democrats will go to protect a one-sided narrative from a thorough examination by committee Republicans.”

A source close to Mueller told Fox News, "Aaron Zebley was the Deputy Special Counsel and had day-to-day oversight of the investigations conducted by the Office. He will accompany Special Counsel Mueller to the Wednesday hearings, as was discussed with the committees more than a week ago."

Judiciary Committee Republicans say Zebley is not on their witness list.

Prominent party leaders on both sides of the aisle have indicated they might have better things to do on Wednesday than watch the proceedings. Trump this week seemingly  feigned indifference to Mueller's testimony, telling reporters in the Oval Office on Monday, "I'm not going to be watching — probably — maybe I'll see a little bit of it."

The president has a light schedule when Mueller begins speaking Wednesday morning, then heads to West Virginia for evening fundraisers.

The TVs aboard Air Force One are likely to be tuned to coverage of the hearings, and the president is expected to watch or be briefed on most of the proceedings, according to four administration officials and Republicans close to the White House. They spoke on condition of anonymity because they were not authorized to discuss internal plans.

House Speaker Nancy Pelosi told Fox News on Thursday, meanwhile, that she has a "busy schedule," but "will watch as much as I can" of the hearing.

As for everyday Americans, Senate Majority Leader Mitch McConnell told "Fox News @ Night" host Shannon Bream that "the American people are not going to tune in to this much."

"The case is closed," McConnell said. "You know they want him to read his report. The American people have moved on from this, as you saw the vote over in the House recently on taking up impeachment. It didn't get much support."