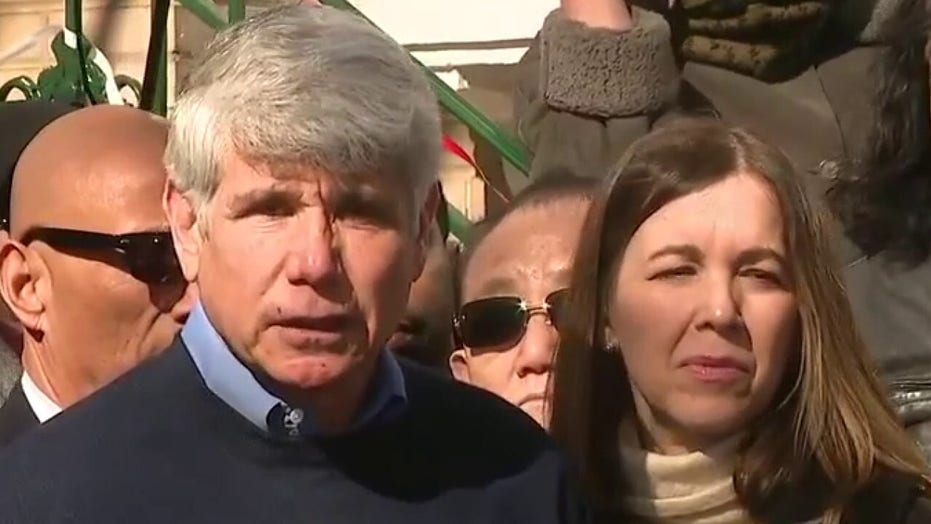 Blagojevich: Trump gave back the freedom that was stolen from me

Former Illinois Gov. Rod Blagojevich holds a press conference with his wife and daughters outside his Chicago home after being released from jail.

Rod Blagojevich, hours after returning from prison a free man, publicly thanked President Trump for commuting his sentence as he delivered a detailed account of his life behind bars with his trademark dramatic flair.

“I’m a Trump-o-crat,” the former Illinois Democratic governor declared Wednesday, in a lively press conference outside his Chicago home with his family by his side.

BLAGOJEVICH SENTENCE COMMUTED: WHAT TO KNOW

The event began later than originally scheduled, which he chalked up in part to difficulty shaving – as he repeatedly dabbed blood on his chin as he spoke.

“It’s been a long, long journey. I’m bruised, I’m battered, and I’m bloody,” Blagojevich said, patting his chin with a napkin. “It’s been a long time since I’ve shaved with a normal razor. I’ve gotta keep dabbing the blood.”

His wife, Patti, chimed in, saying: “I apologize for his tardiness. He couldn’t find where I put his socks this morning.”

The brash politician whose corruption-case sentence of 14 years was cut short a day earlier by Trump's decision went on to say, “We want to thank and give our most profound and everlasting gratitude to President Trump.” He thanked Trump for giving back the freedom he said was "stolen" from him.

Noting they are from different parties, he said Trump's commutation decision “does nothing to help his politics.”

“Trump is a man who is tough and outspoken, but he also has a kind heart,” he continued. “This is an act of kindness and I believe this is the beginning of the process to turn an injustice into justice.”

He added: “Sorry about this blood.”

Blagojevich, after having served eight years of his sentence, went on to describe his first three years in prison, explaining that he was “behind what inmates call a razor wire ... with guards armed with machine guns who have the discretion to shoot you.”

He noted he never went near the fence. He described where the inmates slept as "cold and squalid," like "tombs." He said many of the inmates were cartel members, sex offenders and other violent criminals, describing his cell as a "six-by-eight-foot" room with a heavy iron door and a small window.

“Often late in the night, I’d look out past [the window] and think of home,” he said, describing his hope to someday return to his wife. “I would say to myself, 'One day, one day I’ll make it back to you and hold your hand, sweetheart,' and I would remember what a gracious thing it’s been to walk through life with you.”

Blagojevich continued touting Trump as “tough and outspoken,” but said “he gets things done.”

“He’s a problem solver, where too many politicians don’t want to solve problems,” he said, noting that if he were to have the ability to vote, he would cast his ballot in November 2020 for Trump.

Blagojevich, who was a contestant on Trump’s “Celebrity Apprentice” in 2010, began his 14-year prison sentence in 2012, after being convicted of corruption. Blagojevich had been serving his sentence at a federal prison in Littleton, Colo.

Blagojevich, who was governor of Illinois from 2003 to 2009, was impeached and also convicted on 18 counts, including lying to the FBI and wire fraud, for trying to trade an appointment to Barack Obama's Senate seat for contributions, and for the attempted extortion of a children’s hospital executive. The 7th U.S. Circuit Court of Appeals in Chicago in 2015 tossed five of 18 convictions, including ones in which he offered to appoint someone to a high-paying job in the Senate.

He has consistently argued that he did nothing wrong.

Blagojevich’s wife, Patti, went on a media blitz in 2018 to encourage Trump to step in, praising the president and likening the investigation of her husband to special prosecutor Robert Mueller's investigation into Russian meddling in the 2016 election – a probe Trump long characterized as a "witch hunt."

On Tuesday, Trump confirmed to reporters that he granted clemency for the ex-governor, calling his sentence “ridiculous.”

“He’ll be able to go back home with his family after serving eight years in jail,” Trump said.

"Many people disagreed with the sentence," Trump told reporters.

"Very far from his children," Trump said. "They rarely get to see their father outside of an orange uniform. I saw that and I did commute his sentence."