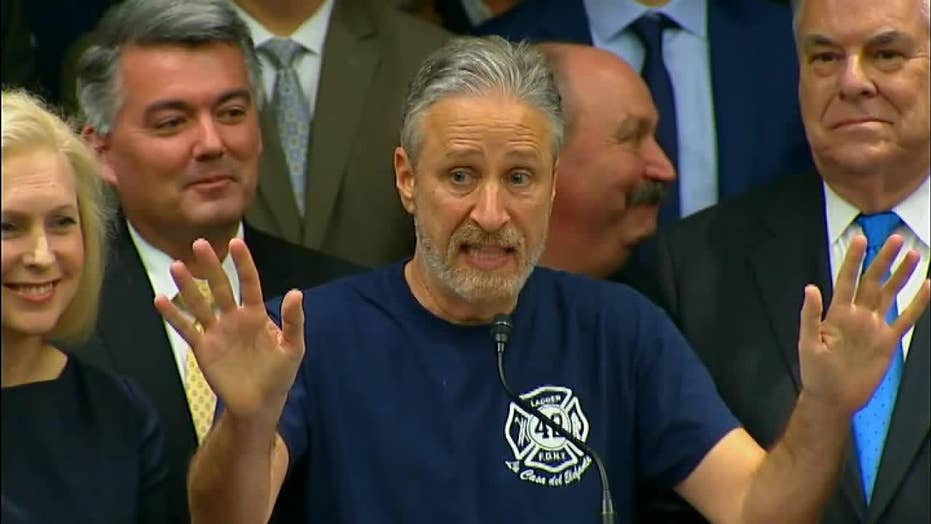 Jon Stewart on 9/11 Victim’s Fund: The Trump Justice Dept. is doing an excellent job... it's Congress' job to fund it

A bipartisan group of lawmakers on Monday introduced a plan to permanently authorize the September 11th Victim Compensation Fund at full level, following the announcement of a funding shortfall revealed earlier this month that would cut rewards to the 9/11 first responders and survivors who have become ill due to exposure to toxins and chemicals.

Comedian Jon Stewart, a prominent advocate for first responders, praised the Trump Justice Department's administration of the fund, saying it was doing "an excellent job."

"The claims are going through faster and the awards are coming through," Stewart said. " ... That’s why we're in the problem that we're in, is the program works exactly like it's supposed to. So now it's Congress' job to fund it properly and let these people live in peace."

The September 11th Victim Compensation Fund announced earlier this month that due to a lack of funding, responders and survivors would receive cuts to the awards that they were expecting for illnesses. Without passage of the bipartisan legislation, future payments to those who have been diagnosed with 9/11 cancers and other illnesses would be cut by up to 70 percent.

JON STEWART CALLS ON CONGRESS TO STEP UP AND HELP 9/11 HEROES, THEIR FAMILIES

“We fought for and passed the 9/11 Victims Compensation Fund to provide peace of mind to those sickened after the horrific attack,” Schumer said Monday. “For too many, ailments and disease from exposure to that toxic airborne brew have taken years to show up and –as the need for the fund grows—the chance it may not have adequate resources to take care of our heroes is just unacceptable.”

He added: “There is no time to waste in passing the bill to fully fund—and make permanent—the VCF so that any 9/11 first responder who might get sick will get the care they earned.”

Gillibrand said that it "should not have to be a fight" to pass the legislation, saying that doing "anything less" would be "shameful."

“We must not force our 9/11 heroes to go through this same exhausting process again. We have to fully fund the 9/11 Victim Compensation Fund and make it permanent and we must do it now,” she continued. “Because the 9/11 death toll is still growing. 9/11 responders are still suffering.”

King, R-N.Y., said it was imperative to “enlist political support from all regions and parties” to ensure the continuation of payments to the first responders.

“We have come too far to fail now,” he said.

The lawmakers were joined by comedian Jon Stewart, the former host of “The Daily Show” on Comedy Central, who has been a longtime advocate of 9/11 workers and responders who became ill after working at the site following the terrorist attack nearly 18 years ago.

“We don’t want the 9/11 community and the first responders to have their issues be swept under the rug or be ignored,” Stewart said on “America’s Newsroom” Monday morning. “These are men and women who have suffered great illnesses because of their heroic work down on Ground Zero during 9/11 and during the months that passed, and they deserve our attention.”

Nearly 40,000 people have applied to the federal fund for people with illnesses potentially related to being at the World Trade Center site, the Pentagon or Shanksville, Pennsylvania after the 2001 terror attacks there, and about 19,000 of those claims are pending. Nearly $5 billion in benefits has been awarded out of the $7.3 billion fund.

According to the Fund’s special master, Rupa Bhattacharyya, fund officials estimated that an additional $5 billion was needed to pay pending claims and the claims that officials anticipate would be submitted before the fund’s December 2020 deadline. Without the funding, officials determined that pending claims submitted would be paid at 50 percent of their prior value; and those submitted after Feb. 1, would be paid just at 30 percent value.

Scientists can't say definitively whether toxins at the site gave people cancer. One study published last year found that overall mortality rates among nearly 30,000 rescue and recovery workers weren't elevated. But researchers have raised concern about an unusual number of suicides among first responders and more deaths than expected from brain cancers and non-Hodgkin's lymphoma.

Bhattacharyya said the volume of claims has increased over the past year, with more than 8,000 claims filed in the last four months.