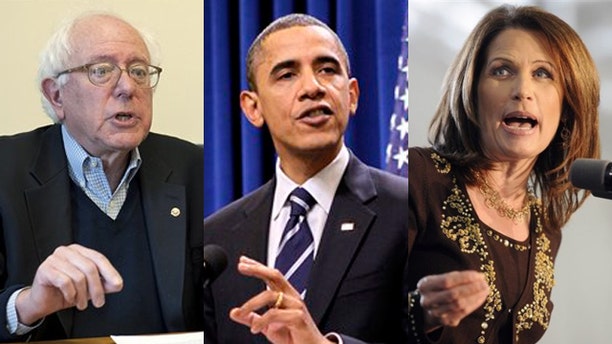 Compromise is a dirty word in Washington. And with an epic "deal" on the table to extend existing tax rates while granting a host of Republican and Democratic holiday wishes, it is pretty much guaranteed nobody's happy in the rank-and-file.

While the liberal wing of President Obama's party was howling over his decision to negotiate with Republicans -- likened to "terrorists" by one Democratic senator last week -- conservatives also were grumbling that the president won concessions for Democrats in the process.

The massive grab bag of proposals have reportedly been totaled to cost anywhere from a half trillion to $1 trillion, in a space of two years. The unemployment aid extension alone is valued at $56 billion -- Sen. Olympia Snowe, R-Maine, urged her colleagues to revive a plan that would use unspent discretionary money to pay for it, while others questioned the aid's inclusion entirely.

The fallout from Obama's sudden announcement Monday evening signals that the heavy lifting is not over yet. Congress has until Dec. 31 to avert a sweeping hike on all taxpaying Americans, and the negotiators still have a lot of convincing to do. Whatever coalition opposes this package will likely end up being a mix of conservative Republicans and liberal Democrats both disappointed over the ground given to the other side.

While House Republican leaders hailed the deal as a win, conservative members had been expressing concern about the extension of long-term jobless aid, which was set at 99 weeks until it started to phase out last month.

Rep. Michele Bachmann, R-Minn., in an interview Monday on Sean Hannity's radio show shortly before the deal was announced, said that she's not sure Republicans would support a package that includes the aid extension alongside the tax cuts.

"That'd be a very hard vote to take," Bachmann said, urging lawmakers to divorce the two issues. "I think, again, we're back in a conundrum."

She backed off her criticism slightly on Tuesday, saying that despite her concerns about the aid extension the compromise "will at least offer a foundation for job creation."

Rep. Jeb Hensarling, R-Texas, told Fox News the tax cut extension is vital but criticized the jobless benefits and said they should at least be paid for. "We want to make sure we're dealing more with paychecks and not so focused on unemployment checks," he said Tuesday, noting that he needs to review the deal more closely.

"I'm not initially thrilled about it, and that's perhaps is what a successful negotiation is all about," he said.

On the other side, Vermont Sen. Bernie Sanders, an independent who caucuses with the Democrats, threatened to filibuster, calling the deal "absolutely wrong" in an interview with MSNBC.

Obama accurately predicted that the proposal would be met with sound and fury. "I have no doubt that everyone will find something in this compromise that they don't like," he said. But he said he's not willing to let ordinary Americans become "collateral damage for political warfare in Washington."

Under the proposal, the Bush tax cuts would be extended for two years for all income tax brackets. Long-term jobless aid would be extended through next year so that people who are entitled to 99 weeks now will continue to receive aid. The estate tax rate would be renewed only at a lower rate than the 55 percent it was before the Bush-era cuts. And instead of pushing for an extension of the stimulus act's income tax cut, the administration wants a one-year payroll tax reduction that would cut the Social Security contribution paid by workers from 6.2 percent to 4.2 percent.

Vice President Biden plans to attend the Senate Democrats' policy luncheon Tuesday to discuss the plan. A meeting of House Democrats is set for Tuesday evening. Though the White House ultimately wants to convince the base there's more to like than hate in the new package, the White House may be stoking the fire a bit. After an official was quoted saying the administration was looking for a fight, a senior congressional leadership aide said: "When they want to fight they know how to fight. When they want to cave they know how to blame others."

But a White House official told Fox News this is a better deal than the administration believes it would get a month or two from now, or would have gotten just a few days ago.

"Ultimately, there are pieces in here that are big Democratic initiatives," the official said.

The White House will not only have to make that argument to Democrats on the Hill, but to the advocacy groups behind the party. Liberal groups were merciless in their criticism of the Obama administration in the wake of the deal.

Adam Green and Stephanie Taylor, co-founders of the Progressive Change Campaign Committee, released a statement accusing the president of letting down his voters.

"President Obama caved in the name of compromise," they said, urging congressional Democrats not to "make this same mistake."