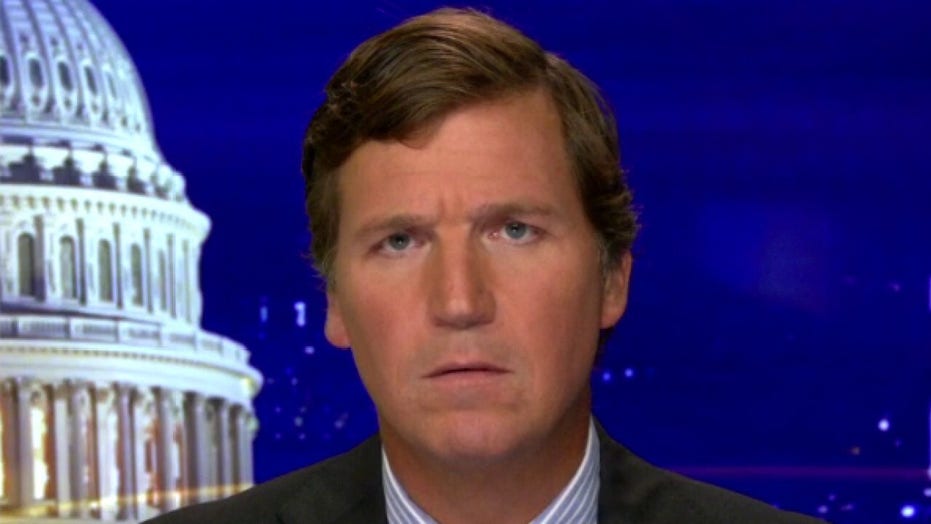 Tucker: Media embrace Big Tech censorship instead of pushing back

The only reason we have a free press is to fight back against authoritarian power structures demanding we read from approved scripts.

As Republicans increasingly wage an all-out war against what they perceive as left-wing bias across major social media platforms, big tech billionaires are reportedly working to secretly boost Joe Biden's flagging campaign using tactics that some experts describe as underhanded and nefarious -- and their efforts have even frustrated some Democrats hoping to retain control over their party.

Hoffman alone has dumped approximately $10 million into Acronym, which backed the company Shadow behind the disastrous Iowa caucus app. According to Vox, Acronym hopes to secure another $25 million "to set up seven of its own media properties in swing states, creating local news sites that portray moderate Democratic candidates in a favorable light, but appear to be objective, homespun outlets."

Top Hoffman adviser Dmitri Mehlhorn reportedly wrote in a private memo that the key to fighting President Trump was “building trusted media channels with peer-to-peer elements” and “content that has a journalistic flavor.”

Additionally, Hoffman has funded what top Democratic National Committee (DNC) officials consider an "existential threat" to the Democratic Party: an effort to create an independent database of progressive voters' data. In particular, a startup called Alloy has bought up critical voter outreach data. (In a statement, Alloy said it's "proud" of its work to help Democrats and progressives "on the front lines.")

“My problem is when Silicon Valley folks think that they know how to do our jobs better. I would never walk into Google or anywhere else and say, ‘Your model sucks,’” Jane Kleeb, who chairs the Nebraska Democratic Party, told Vox's Recode. “I don’t second-guess them, and I’m asking them not to second-guess us.”

Reid Hoffman, the co-founder of LinkedIn said he found out that telling someone you’re buying a house in New Zealand is “kind of a wink, wink, say no more,” when it comes to survivalism.

In 2018, Politico reported that Hoffman's effort could eventually make the Democratic Party’s file "less valuable." A data trust structure, similar to the one used by Republicans, "allows for raising money from the private sector free from campaign finance limits," the outlet reported, and would "facilitate pooling together data from outside groups and campaigns in real-time, which is normally not allowed."

Hoffman has also been a big financial backer of MotiveAI, which has been linked to spreading overtly fake news. For example, The Daily Beast reported that four Colorado-based companies "associated with MotiveAI" used "50 seemingly independent Facebook pages to purchase ads in 2018" -- including a page that suggested Brett Kavanaugh "had helped Bill and Hillary Clinton cover up the murder of a White House aide."

MotiveAI apparently had no scruples about its behavior and even took credit for Democratic gains in the 2018 midterms.

“We produced over 260 videos and over 5,000 individual ads,” the company boasted in a since-deleted video archived by The Daily Beast, “which led to 28 districts flipped and the highest Democratic margin since 1972 [and the] first time in eight years the Democrats took control of the House.”

Moskovitz and Powell Jobs, meanwhile, are pouring millions into an unprecedented voter registration effort called the Voter Participation Center, as well as the affiliated group Center for Voter Information.

Schmidt, for his part, is paying for state party officials to learn to better use data, similar to his efforts in 2016 to boost the Hillary Clinton campaign.

Their efforts unfolded amid a brewing big-tech battle in Washington. Trump unveiled a new executive order on Thursday that would sharply limit federal funding and legal protections for social media platforms that engage in censorship or partisan "fact-checking," this after Twitter labeled two of his tweets as "misleading."

Experts disputed that Trump's tweets were misleading, though, and Fox News found that Twitter's head of fact-checking has previously mocked Trump supporters, called Sen. Mitch McConnell a "bag of farts" and even insulted "trannies."

Also on Thursday, Fox News exclusively reported that some top Republican lawmakers have turned their focus to Reddit, saying the forum had systematically censored and destroyed the pro-Trump subreddit known as r/The_Donald.

DARPA, however, said Curtis Hougland, who is running the new operation, was overselling the agency's role in creating the tool.

"Hougland's claim DARPA funded the tech at the heart of his political work is grossly misleading," DARPA tweeted. "He advised briefly on ways to counter ISIS online. He was not consulted to design AI or analysis tools, nor certainly anything remotely political. DARPA is strictly apolitical."

"Hougland had a tertiary consulting role advising an agency program on how to explore new and better ways to counter America's adversaries online," a DARPA spokesperson separately told Fox News. "He was not consulted for technical expertise designing artificial intelligence or network analysis tools, nor certainly any research that was remotely political. ... Unequivocally, DARPA funding did not help advance the technology with which Hougland now works any more than does his use of other agency technologies like the internet or mobile phone."

The Washington Post first reported that the initiative, called Defeat Disinfo, will utilize "artificial intelligence and network analysis to map discussion of the president’s claims on social media," and then attempt to "intervene" by "identifying the most popular counter-narratives and boosting them through a network of more than 3.4 million influencers across the country -- in some cases paying users with large followings to take sides against the president."

The Post later updated its reporting to clarify that Hougland was "using open-source technology initially incubated with funding from DARPA." The Post originally reported: "The initiative is run by Curtis Hougland, who received initial funding for the technology from DARPA, the Pentagon’s research arm, as part of an effort to combat extremism overseas."