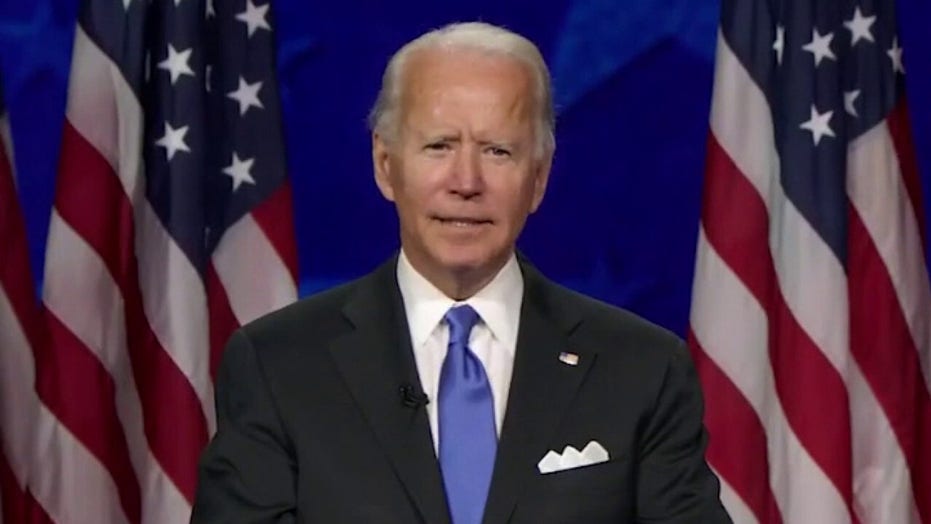 Former Vice President Joe Biden is promising to guide America out of what he calls ‘this season of darkness’; Peter Doocy reports.

Democratic presidential candidate Joe Biden said in a Friday interview with ABC News that he would agree to shut down the country again if scientists recommended doing so to fight the coronavirus crisis.

“I would shut it down; I would listen to the scientists,” Biden said, appearing alongside vice presidential candidate Kamala Harris in their first joint interview as the Democratic Party’s official nominees with ABC "World News Tonight" Anchor David Muir in an interview set to air Sunday.

The unprecedented decision this spring to close businesses, schools, churches in order to fight the spread of coronavirus has had wide-reaching ramifications on the daily lives of Americans. President Trump has been pushing for schools, churches and businesses to reopen to get the economy moving again.

In the ABC News interview, Biden pointed to what he called the Trump administration's “fatal flaw” in dealing with the coronavirus pandemic that has infected to 5.6 million Americans and killed over 175,000 people. And the economic effects of which put over 30 million people out of work during the month of July alone, according to the Bureau of Labor Statistics.

“I will be prepared to do whatever it takes to save lives because we cannot get the country moving, until we control the virus,” Biden told Muir. “That is the fundamental flaw of this administration's thinking to begin with. In order to keep the country running and moving and the economy growing, and people employed, you have to fix the virus, you have to deal with the virus.”

In his Democratic convention speech, Biden said that tackling the coronavirus would be his first task if elected.

The former vice president took some heat Friday morning from members of the Trump administration who pushed back on his ability to handle the pandemic better than Trump.

PENCE CLASHES WITH CNN ANCHOR ON COVID-19 RESPONSE: YOUR NETWORK ‘WAS WRONG ABOUT A LOT’ IN EARLY STAGES

Although Trump’s message on mask wearing has been ambiguous. He refused to wear a mask for months, and he waited until late-July to start encouraging Americans to put on masks.

GOP lawmakers had urged the president to wear a mask while in public. They said it would do a lot to encourage his base to practice the recommended health measures during the pandemic.

“Unfortunately, this simple lifesaving practice has become part of a political debate that says: If you’re for Trump, you don’t wear a mask. If you’re against Trump, you do,” Senate Health, Education, Labor and Pensions Committee Chairman Lamar Alexander, R-Tenn., said during a hearing in late June. “That is why I have suggested the president should occasionally wear a mask even though there are not many occasions when it is necessary for him to do so. The president has millions of admirers. They would follow his lead."

But then Trump defended a group of his supporters who showed up to an indoor press conference in New Jersey without wearing masks, breaking the state's mandates.

“You said that the pandemic is disappearing, but we lost 6,000 Americans this week and just in this room you have dozens of people who are not following the guidelines in New Jersey,” a reporter  said to the president.

"You're wrong about that because it's a political activity," Trump argued. "And it's also a peaceful protest. To me, they all look like they pretty much all have masks on."

Trump and Biden will hold their first debate Sept. 29 in Cleveland.