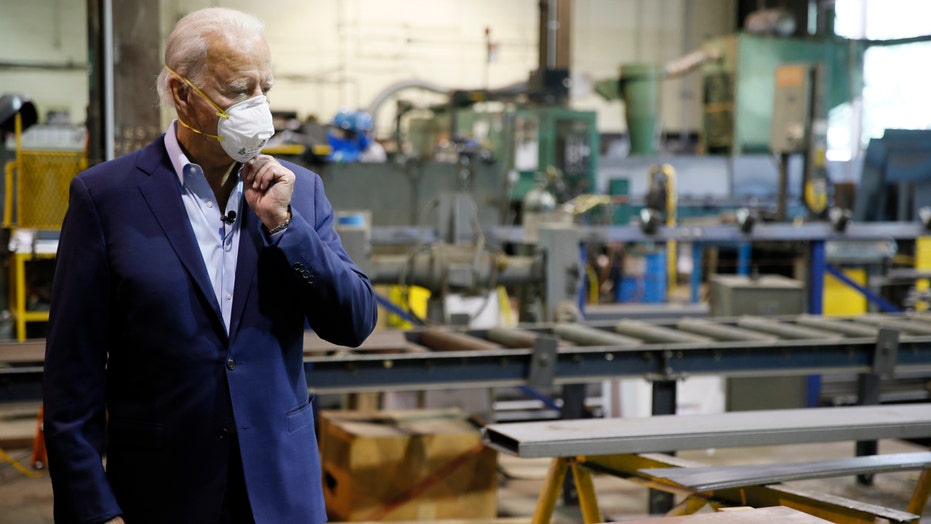 Joe Biden narrows down his choice for vice president

Which woman will be Biden's running mate? Peter Doocy reports.

With the clock ticking, a leading adviser to presumptive Democratic nominee Joe Biden said the former vice president will use the next week or so to “spend some time” with the roughly half-dozen contenders who have made his shortlist for running mate.

Los Angeles Mayor Eric Garcetti, a co-chair of Biden's running mate selection committee, said Tuesday in an interview with MSNBC that they have "amazing women that have been a part of this process. We're keeping them all, we've vetted them heavily, all of them have passed the vet, and now in this next week, week and a half, Mr. Biden can spend some time with them."

Garcetti’s comments came with just 13 days to go until the Democratic National Convention gets underway in Milwaukee – and amid a surge in hype and speculation over whom will Biden name as his running mate.

These final one-on-one meetings – whether in-person or virtual – are seen as crucial for the Democratic candidate, who’s looking to find a running mate who will bond with him the way he did with President Barack Obama during their eight years in the White House.

Last week, Biden told reporters that he would choose his party's vice presidential nominee by "the first week in August," but a source familiar with the process told Fox News on Monday that "an announcement isn't likely this week."

The postponement is likely to intensify the behind-the-scenes jockeying among Democrats backing the roughly half-dozen female candidates believed to be among the top contenders. It would also provide time for more for opposition research to be dropped on some of the potential running mates.

As Biden narrows down his shortlist, the sharp elbows by Democrats supporting some of contenders occasionally spills out into public view. A veteran Democratic consultant who asked to remain anonymous to speak more freely called some of the barbs between the camps "disappointing and unfortunate."

But Mo Elleithee, the founding executive director of Georgetown University's Institute of Politics and Public Service and a Fox News contributor, dismissed the jockeying as "background noise."

"I don't think it's going to have much impact," Elleithee said. "I don't think most people are going to pay attention until the actual nominee is unveiled."

As for an announcement coming closer to the convention, the former senior spokesman for Hillary Clinton's 2008 presidential campaign, who later served as communications director for the Democratic National Committee, emphasized that "getting it right is much more important than getting it out soon. So I don't think there's much downside to this. ... I don't think waiting an additional week makes much of a difference."

"Looking back at the past couple of decades of presidential politics, presidential nominees have typically announced their running mates much closer to the conventions," Elleithee added.

An exception was in 2012, when GOP nominee Mitt Romney named then-Rep. Paul Ryan of Wisconsin as his running mate roughly two weeks before the GOP convention.

But more time could lead to opposition research on some of the contenders. This past weekend, Rep. Karen Bass of California needed to respond to a recently emerged video that showed her praising the controversial Church of Scientology during a church opening in 2010. The organization has long been accused of acting like a cult.

In a statement, Bass emphasized that she "proudly" worships at a Baptist church and noted that, since her 2010 comments, "published firsthand accounts in books, interviews and documentaries have exposed this group. Everyone is now aware of the allegations against Scientology."

Colin Reed – a longtime GOP strategist and veteran of the 2012 Romney campaign who served as the executive director of the pro-Republican opposition research shop America Rising in the 2016 cycle – highlighted that "you want to send a message to those making the decision that life will be unpleasant or uncomfortable should they pick the running mate that you view was the most formidable."

NEW MEXICO GOVERNOR NIXES DOOR-KNOCKING, BUT NOT PROTESTS – THEN CLARIFIES

"If you have the goods or if you have juicy opposition research on a candidate you don't want to face, there's a strategic advantage to getting that out in the waters ahead of time and let people know 'pick this person at your own peril,'" he explained. "If there are candidates that you do want to be named to the ticket because you think they'll be a political liability, you obviously withhold that information and hope and pray that they are the ones that are picked and then blast them out of the gates."

The naming and nomination of the running mate has long been one of the last remaining big earned media moments heading into the debates, and Reed stressed that "the opposition's job is to make sure it's not pleasant, to make sure there's a barrage of contrasts and negative information being put into the news cycle ahead of time."

But Elleithee countered that such attacks could backfire.

"I actually think it's healthy for the process to have some of this go on now. Seeing how some of the potential candidates deal with the incoming before they're selected is very illuminating," he argued.