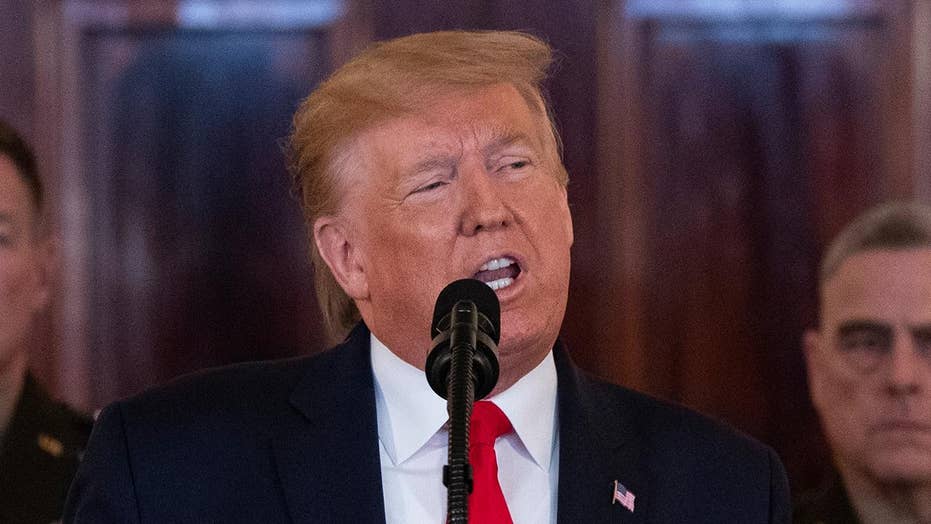 Former Vice President Joe Biden called on President Trump to stop "blaming President Obama for his failures" after Trump alleged that the missiles used in the assault on two U.S. military bases in Iraq in a Tuesday night airstrike were funded by the Obama administration.

"I'm thankful no one was hurt in last night's attack. But we're only in this mess because Donald Trump pulled out of the Iran Deal (which even his advisors said was working), turned his back on our allies, and had no strategy for what comes next," Biden said in a series of tweets on Wednesday. "Instead of using his statement today to lay out a coherent strategy on Iran, Donald Trump used it to mislead the country on the Obama-Biden record. He's been President for three years. It's time he stops blaming President Obama for his failures."

The finger-pointing was an escalation from earlier comments made by Trump in a nine-minute address to the nation where he said "the missiles fired last night at us and our allies were paid for with the funds made available by the last administration,” referring to settlement money the U.S. paid to Iran in 2016.

Trump went on to say that Iran went on a “terrorist spree” with that money “and created hell in Yemen, Syria, Lebanon, Afghanistan and Iraq.”

In 2016, the U.S. paid Iran $1.7 billion in cash, a settlement of a decades-old dispute between the two nations. A planeload of $400 million was delivered to Tehran on Jan. 17, 2016, the same day Iran agreed to release four American prisoners. The remaining $1.3 billion was reportedly paid out within weeks of that first payment.

Another estimated $150 billion of Iranian assets had been frozen in international financial institutions as part of the sanctions. That money was unfrozen by all countries as part of the Iran deal. Some fact checkers have disputed the value of $150 billion, citing Treasury estimates that it could be around $55 billion in liquid assets.

The money has been a talking point for Trump and his Republican colleagues, who have sought to blame recent escalating tensions in the Middle East on Obama and his administration's Iran nuclear deal, despite the attacks being retaliatory as a result of a U.S.-led airstrike that killed top Iranian Quds Force Gen. Qassem Soleimani last week.

Biden has steadfastly defended the nuclear deal, or Joint Comprehensive Plan of Action (JCPoA), which placed restrictions on Iran to limit nuclear proliferation.

Trump pulled out of the deal in 2018 and imposed hefty sanctions on Iran that has crippled its economy and further stoked tensions between Washington and Tehran.

Biden has repeatedly pointed to Trump's withdrawal from the deal as the catalyst to fraying relations in the Middle East and urged the use of diplomacy to restore peace.