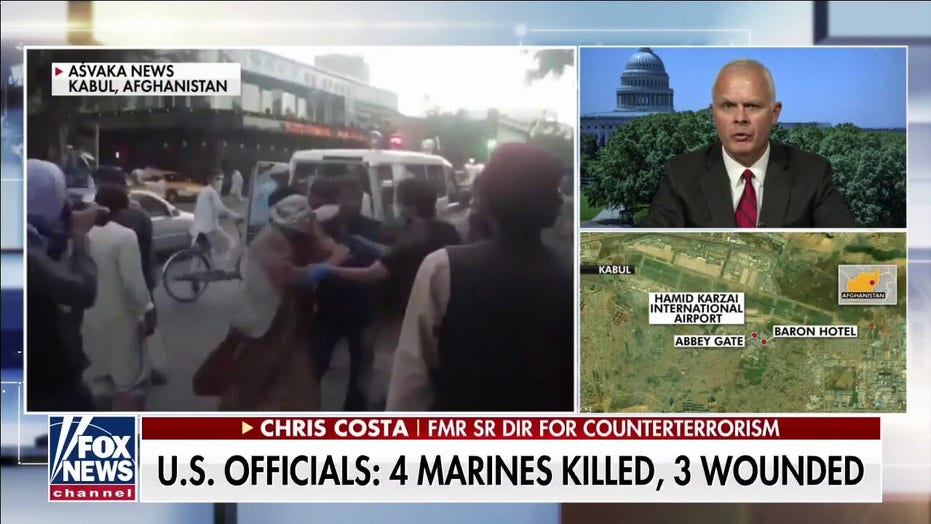 US should not be accepting red lines from the Taliban: Chris Costa

Former President Donald Trump released a statement offering sympathy to the families of the 13 soldiers killed in a suicide bombing in Afghanistan Thursday while the Biden administration attempts to pin the blame for the chaos on Trump.

"Melania and I send our deepest condolences to the families of our brilliant and brave Service Members whose duty to the U.S.A. meant so much to them," Trump said in a statement Thursday hours before Biden addressed the American people. "Our thoughts are also with the families of the innocent civilians who died today in the savage Kabul attack. This tragedy should never have been allowed to happen, which makes our grief even deeper and more difficult to understand. May God Bless the U.S.A."

BIDEN DOESN'T DENY REPORT OF US HANDING OVER NAMES OF AMERICANS TO TALIBAN: 'THERE MAY HAVE BEEN'

The Biden administration has faced scrutiny as recently as Thursday for continuing to work with the Taliban to get Americans out of Afghanistan and Biden has been widely criticized for his hasty and chaotic withdrawal from the country.

Amid the chaotic scramble at Kabul’s airport to evacuate the remaining Americans and U.S. allies out of Afghanistan following the swift collapse of the Afghan government and military at the hands of the repressive Taliban forces, a blame game of sorts has broken out among President Biden and his predecessor in the White House.

Biden has repeatedly cited his predecessor in multiple statements and speeches and Trump has issued a flurry of statements the past couple of days, going as far as arguing that it’s time for the president "to resign in disgrace."

Biden officials have attempted to make the argument that the administration was handcuffed by an agreement with the Taliban signed by President Trump in Doha, Qatar in February 2020, which included a U.S. pledge to remove troops from Afghanistan.

"I bear responsibility for, fundamentally, all that's happened of late," Biden said Thursday. "But, you know as well as I do that the former president made a deal with the Taliban to get all American forces out of Afghanistan by May 1."

But Biden can go only so far in claiming that agreement boxed him in. It had an escape clause: The U.S. could have withdrawn from the accord if Afghan peace talks failed. They did fail, but Biden chose to stay in the agreement, although he delayed the complete pullout from May to September.

Chris Miller, acting defense secretary in the final months of the Trump administration, chafed at the idea that Biden was handcuffed by the agreement.

"If he thought the deal was bad, he could have renegotiated. He had plenty of opportunity to do that if he so desired," Miller, a top Pentagon counterterrorism official at the time the Doha deal was signed, told The Associated Press in an interview.

Renegotiating, though, would have been difficult. Biden would have had little leverage. He, like Trump, wanted U.S. troops out of Afghanistan. Pulling out of the agreement might have forced him to send thousands more back in.

U.S. officials made clear at the time that the agreement was conditions-based and the failure of intra-Afghan peace talks to reach a negotiated settlement would have nullified the requirement to withdraw.

One day before the Doha deal, a top aide to chief U.S. negotiator Zalmay Khalilzad said the agreement was not irreversible, and "there is no obligation for the United States to withdraw troops if the Afghan parties are unable to reach agreement or if the Taliban show bad faith" during negotiations.

Biden has publicly stated that he would have removed all troops from Afghanistan even if Trump had not made the Doha arrangement.

The president has also credited Trump’s deal with the fact that the Taliban has not directly attacked American troops during the withdrawal.

Trump addressed critics of his plan in a radio interview with Hugh Hewitt on Thursday and said that a Taliban attack on U.S. troops in March would have caused him to end the agreement and strike the Taliban.

"We would not have stood for any soldiers or any Americans being killed or shot at or hurt in any way," Trump said. "That was in there. And Hugh, for 18 months, not one American soldier was killed. Not one. Eighteen months. And that was because of the agreement."

Trump added, "It was conditions-based. Now there were many other parts of the agreement also. And if they violated them, you know that, we went in and bombed the hell out of them, and they never would. They never would have come into Kabul."

Biden is facing calls from prominent Republicans, including Sens. Josh Hawley and Marsha Blackburn and former U.S. Ambassador to the United Nations Nikki Haley, to resign over the American loss of life in Afghanistan. White House Press Secretary Jen Psaki dismissed those calls on Thursday, saying that today is "not a day for politics."

Associated Press and Paul Steinhauser contributed to this report