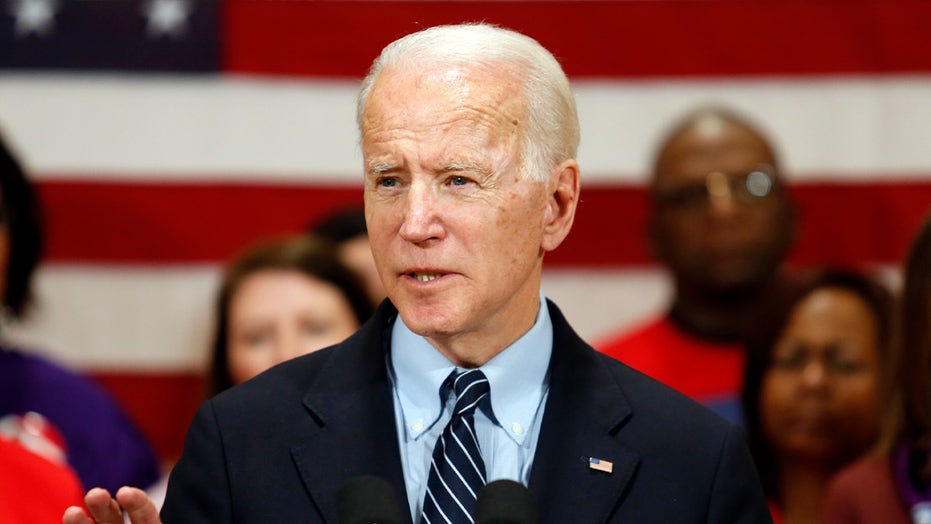 Over the last week, however, Biden has delivered ambitious proposals on manufacturing and climate change, setting the stage for an election-year showdown over the economy.

WILKES-BARRE, Pa. -- Former Vice President Joe Biden is intent on flipping Pennsylvania, his birthplace, forging ahead with in-person events in the battleground state amid the coronavirus pandemic.

A Monmouth University poll released this week shows Biden topping President Trump among registered voters 53-40 percent in the state. But, the presumptive Democratic presidential nominee still lags slightly behind the GOP incumbent on the economy, according to another poll. A Susquehanna Polling and Research/Fox 43 poll last month shows Trump leads Biden by a 51-36 margin among those who viewed the economy as the most important issue.

"If this becomes an economy pocketbook election, you can't rule Donald Trump out because, on the key issue most voters care about, he's winning among jobs voters," Jim Lee, the president and CEO of Susquehanna Polling & Research, told affiliate Fox 43.

BIDEN LEADS IN PENNSYLVANIA BUT SOME POINT TO 'SECRET TRUMP' VOTERS: POLL

Over the last week, however, Biden has delivered ambitious proposals on manufacturing and climate change, setting the stage for an election-year showdown over the economy. The two proposals, which together call for nearly $3 trillion in government spending, are part of his wider economic recovery plan and would deliver millions of new union jobs, said Biden.

“These funds will provide reliable, predictable demand for products made by American workers and supply chains like this one right here for the American interest,” Biden said after rolling out his “Buy American” campaign at McGregor Industries in Dunmore last week.

Biden’s plan has garnered mixed reactions in the state’s Wyoming Valley. The area, which includes industrial municipalities like Dunmore, Scranton, Wilkes-Barre and Pittston, is notable for its swing voters.

Luzerne County, where Wilkes-Barre sits as county seat, voted for Trump in 2016 after he campaigned to bring back coal and manufacturing jobs. It had gone to former President Barack Obama in back-to-back elections. Many see the region as a bellwether for Rust Belt Counties in November.

Luzerne County, which flipped for Trump in 2016 after voting for Obama in back-to-back elections, is a bellwether county in the battleground state.

“For a long time, we’ve heard [Biden’s] our native son. He hasn’t lived here in over 70 years,” said Chris Chermak, who serves as the Republican County Commissioner in neighboring Lackawanna County.

“And as far as economic recovery, he was our vice president for eight years, and this region really didn’t see any help at all,” he added.

Northeastern Pennsylvania, known for its abundance of coal, has struggled for decades, spurred by the decline of coal.

“We always tend to lag little bit behind the state of Pennsylvania in terms of employment, unemployment,” said Satyajit Ghosh, economics professor at the University of Scranton.

But, Ghosh said the region did see some improvements as it restructured its economy and increased its reliance on the service and retail sectors. In fact, data from the state’s Department of Labor and Industry show that until the coronavirus hit, the unemployment rate in Luzerne and Lackawanna counties had been dropping steadily for nearly a decade. Now, the most recent figures from May show that at 14 to 16 percent, both counties have among the highest unemployment rates in the state.

Biden's economic proposals on manufacturing and climate change set the stage for an election-year showdown over the economy.

“Right now, we're looking at a very transitional time in our country overall,” said Ed, a local who declined to give his last name.

Ed, a registered Republican who voted for Trump in 2016, said he’s disillusioned with the president.

"I don't believe that the president has done a bad thing, you know, internationally, but maybe domestically things are a little bit weak," said Ed.

At the same time, he’s not sold on Biden. He’s skeptical either one can deliver the economic recovery the area needs.

“It helps when a politician steps in and does something, but it's really business investment and people wanting to come to the area and open up a business here where all of our heavy stuff has gone,” said Ed.

Ghosh agrees saying that while Biden’s manufacturing plan has some good aspects, recovery is a long way off.

“Voters would like to see exactly what type of policies perhaps the two campaigns can come up with to deal with our immediate reality as we see now, because there is absolutely no chance that by November we can say we are out of it,” said Ghosh.