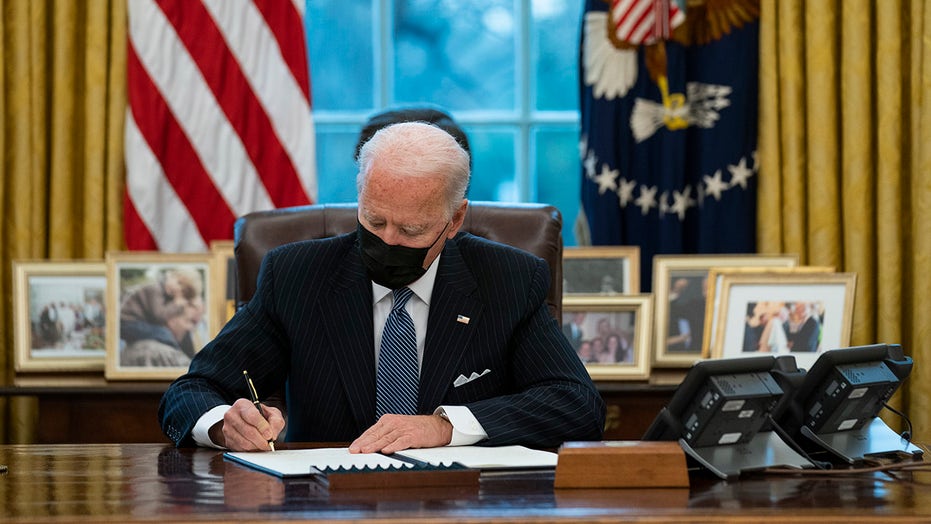 President Biden on Thursday signed a pair of executive orders expanding access to the Affordable Care Act during the coronavirus pandemic and rolling back some of the anti-abortion measures implemented by the Trump administration.

The actions add to the spate of executive moves taken by Biden during his first week in office as he seeks to reverse his Republican predecessor's policies. So far, Biden has signed more than three dozen presidential orders and memos, a record.

BIDEN SIGNS CLIMATE CHANGE ORDERS AMID CONCERNS OVER JOBS: 'IT IS TIME TO ACT'

The latest order will create a special enrollment period on HealthCare.gov, making it easier for the uninsured to obtain health coverage through ObamaCare during the pandemic, which has killed close to 430,000 Americans. Close to 22 million Americans lost their jobs as a result of the virus-induced recession, and there remain 9.8 million individuals out of work compared to February, before the crisis began.

The Department of Health and Human Services will open a three-month enrollment period from Feb. 15 to May 15. An administration official told Fox News to expect a "robust" outreach program on the new enrollment period, but did not provide any estimates on enrollment figures or budget projections.

The annual enrollment period for HealthCare.gov closed in mid-December for Americans living in the 36 states that rely on the federal marketplace.

Under current law, people who lose their job and employer-based insurance qualify for a special enrollment period through ObamaCare, but must provide proof that they lost their coverage. By establishing a special enrollment period, the White House is allowing people who chose not to buy health insurance this year but want it now would have been eligible to participate.

Biden will also direct federal agencies to reconsider rules and other policies that may undermine the Affordable Care Act, the landmark health care law passed while he was vice president. He will also request a review of policies that may reduce enrollment in Medicaid, the federal health insurance program for low-income Americans, such as work requirements for recipients.

During a brief signing ceremony in the Oval Office, Biden said the orders were intended to "undo the damage that Trump has done."

"There's nothing new that we're doing here other than restoring the Affordable Care Act and restoring Medicaid to the way it was before Trump became president," Biden told reporters. "Because by fiat, he made [it] more inaccessible, more expensive and more difficult for people to qualify for either of those two plans,."

Although former President Donald Trump and Republicans repeatedly tried and failed to repeal ObamaCare, they took significant steps to gut the law, including eliminating a provision that required Americans to either buy health insurance or pay a fine with the passage of the 2017 Tax Cuts and Jobs Act.

The other measure that Biden signed will immediately rescind the so-called Mexico City Policy, often referred to by critics as the global gag rule. The policy, reinstated by the Trump administration in 2017, bars international non-governmental organizations that provide abortion counseling or referrals from receiving U.S. funding.

Biden called the rule an "attack on women's health access" on Thursday.

During the election, Biden laid out a plan to expand the ACA by adding a public option that's open to all Americans but preserves the option for individuals to keep their private insurance. He has also pledged to lower the age of eligibility for Medicare, the federal program for people over the age of 65, to 60, with an option for individuals between the ages of 60-64 to keep their coverage.