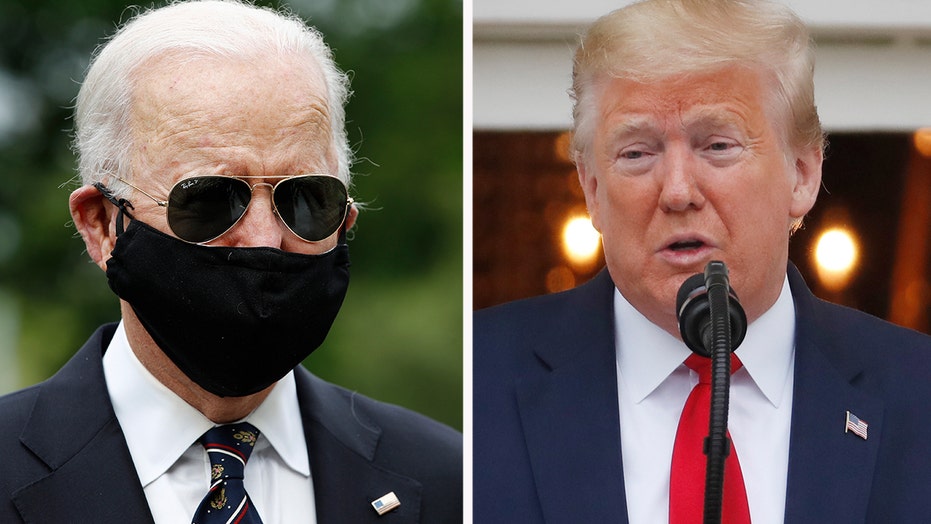 Joe Biden called President Trump an “absolute fool” for not wearing a mask in public and for belittling his Democratic challenger for donning a mask on Monday as he took part in Memorial Day wreath-laying ceremony amid the coronavirus pandemic.

And the presumptive Democratic presidential nominee charged in a CNN interview on Tuesday that the president’s refusal to wear a mask in public – which goes against his own government’s coronavirus guidelines – is “stoking deaths.”

BIDEN WEARS MASK AT MEMORIAL DAY CEREMONY, AS HE LEAVES HIS HOME FOR FIRST TIME IN TWO MONTHS

While Biden wore a mask on Monday, the president did not put one on as he attended two Memorial Day public events.

The former vice president stressed that Trump’s "a fool. An absolute fool to talk that way. I mean every leading doc in the world is saying we should wear a mask when you're in a crowd."

"This macho stuff, for a guy -- I shouldn't get going, but it just, it costs people's lives. It's costing people's lives," Biden emphasized. “It’s stoking deaths.”

Biden said that wearing a mask presents and projects leadership, adding, “Presidents are supposed to lead, not engage in folly and be falsely masculine."

Following the interview, the former vice president changed his Twitter profile picture to a photo of him wearing the mask Monday.

The president has repeatedly refused to wear a mask during public events or trips. He acknowledged wearing a mask during a stop last week at a Ford Motor Company manufacturing plant in Michigan, but said that he removed it because he "didn't want to give the press the pleasure of seeing it."

FOX NEWS POLL INDICATES BIDEN HAS THE ADVANTAGE ON HANDLING THE CORONAVIRUS, BUT TRUMP HAS THE EDGE ON THE ECONOMY

White House press secretary Kayleigh McEnany told reporters during Tuesday’s press briefing that it was "peculiar" that Biden doesn't wear a mask inside his home that he shares with his wife but that he decided to wear on during his outdoors public event on Monday.

"It is a bit peculiar, though, that in his basement, right next to his wife, he's not wearing a mask," McEnany noted. "But he's wearing one outdoors when he's socially distant. So I think that there was a discrepancy there."

But health experts have repeatedly recommended wearing face masks or facial when going to public places where social distancing is impossible but say it’s unnecessary to wear a mask around people such as family members with whom you are quarantining.

Biden also pushed back in the interview to recent questioning by Trump and his campaign of the 77-year-old former vice president’s mental acuity.

Asked how he would push back, Biden said, “Watch me.”

"Look, I mean, talk about a guy who's missing a step," Biden said of the 73-year-old president. "He's missing something, man."