Rural farmers are panning Joe Biden’s decision to hit the Iowa campaign trail this week with former Obama Agriculture Secretary Tom Vilsack, who’s been under fire over his $1 million-a-year job with a group that is funded by mandatory fees from struggling dairy farmers.

Vilsack, the former Iowa Democratic governor, endorsed Biden and joined the former vice president on his “No Malarkey” bus tour of Iowa in an appeal to rural voters. But some farmers said the move shows that Biden is tone deaf to the harsh realities of dairy farmers who are suffering from closures and bankruptcies.

“Vice President Biden clearly didn’t think through the ramifications of having someone like Secretary Vilsack on the bus tour and writing your agriculture policy when the former secretary is taking a million dollars out of the pockets of dairy farmers across the country,” said Jake Davis, national policy director at Family Farm Action, a non-profit progressive advocacy group aimed at curbing corporate agribusiness growth.

Davis, a farmer from Missouri who hasn’t endorsed in the 2020 race, called Biden’s tag-team with Vilsack this week a “clear misstep.”

“It just seems like a risk that one didn’t have to take,” Davis said.

Vilsack has been in the hot seat in recent months for earning nearly $1 million in salary in 2018 as the highest paid executive at Dairy Management Inc., a nonprofit responsible for promoting milk goods and funded directly by mandatory fees from dairy farmers. The Milwaukee Journal Sentinel earlier this year exposed the bloated salaries of the top 10 dairy executives that topped $8 million at a time when many dairy farmers are on the brink on financial ruin amid a downturn in milk prices. 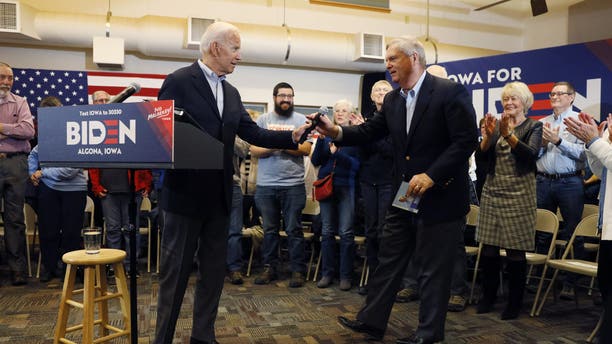 Under federal law, farmers are required to pay 15 cents for each 100 pounds of milk they sell into a so-called “checkoff” program to promote and advertise their products. Ten cents goes to local and regional programs and 5 cents goes to fund national programs, such as Dairy Management where Vilsack is executive vice president.

Checkoff fees in various agricultural sectors have helped fund catchy campaigns like “Got Milk?” "Pork. The Other White Meat", "The Incredible, Edible Egg", and "Beef: It's What's for Dinner."

But the dairy market has been especially tough recently with farmers blaming an oversupply of milk, reduced demand and more alternatives like soy and almond milk.

With money so tight, dairy farmers are fuming that their checkoff fees are padding the pockets of people like Vilsack.

“When we see that the funds that we’re mandated to pay through the checkoff are going to these really high salaries, it kind of just kicks you in the stomach,” said dairy farmer Sarah Lloyd from Wisconsin Dells.

Lloyd, a Bernie Sanders supporter and director of special projects at the Wisconsin Farmers Union, said Biden’s choice to campaign with Vilsack at this time “clearly shows me that Biden is out of touch.”

A spokesman for Biden did not respond to a request for comment. Vilsack, through a representative, declined a request for an interview. Previously, Vilsack snapped at a Milwaukee Journal Sentinel reporter when confronted about his pay.

“It just seems like a risk that one didn’t have to take."

“It’s insulting to me to be asked this question,” Vilsack said. “The dairy industry came to me and offered me the job – I didn’t seek the job. I didn’t ask for the job.”

Vilsack endorsed Biden and joined him on the Iowa bus tour to help the former VP appeal to rural voters and the agriculture community in the run up to the Iowa caucuses Feb. 3. He made several stops with Biden on Saturday, Sunday and Monday.

His $1 million salary didn’t come up. Iowa attendees said they generally respected Vilsack during his time as governor from 1999 to 2007 but it wasn’t necessarily enough to sway them to support Biden.

“Right now Tom Vilsack could be a liability for anybody taking that big wage. In my opinion, he hasn’t earned it,” Chris Petersen, a hog and hay farmer in Clear Lake and backer of Bernie Sanders.

“I think many farmers who are struggling, especially dairy farmers, really frown upon that,” Petersen added.

Doug Errthum, who farms dairy, corn, soybeans and hay in Holy Cross, Iowa, said he used to think of Vilsack as a “great guy,” but he wondered why Vilsack would make $1 million through fees out of his pocket.

“Obviously, seeing the money going to them is difficult when we have bills to pay ourselves,” said Errthum, who supports President Trump.

“It’s been a rough four years,” Errthum said of his dairy business. “I have a lot friends who used to milk and they don’t do it anymore. They can’t handle it anymore. It’s emotionally draining.”

“We hired Secretary Tom Vilsack to expand U.S. dairy’s presence in key global markets,” the statement said. “Under his leadership over the last three years, U.S. dairy exports reached an all-time high in 2018, with 16 percent of U.S. dairy being sold to global markets."

The statement continued: "His relationships across the public and private sectors internationally are opening new doors and new opportunities for U.S. dairy products. And his ability to proudly represent U.S. dairy farmers’ commitments around sustainability to global leaders is unmatched. We wouldn’t be able to achieve these kinds of results, which are critical to the ongoing strength and viability of the U.S. dairy sector and farmers, without Secretary Vilsack’s vision and leadership.”

Joe Maxwell, a hog and hay farmer in Missouri and sharp critic of the mandatory checkoff fees, said the high salaries might be warranted for a successful ad campaign. Instead, reporting revealed that Dairy Management paid $9.1 million to Domino’s and more than $5 million for McDonald’s USA LLC to help the mega-companies with their promotions.

“Dairy farmers are having that money extracted to ensure Domino’s and these executives are living fat and happy,” said Maxwell, who is policy advisor for the Organization of Competitive Markets, a family farm advocacy organization.

“We would suggest that Vice President Biden take a hard look at getting advice from others who are not opposed to taking on that corporate power.”