President Biden said Wednesday he will tell Russian President Vladimir Putin at an upcoming summit that there will be "consequences" if Russia takes harmful action toward democratic governments, but that he is not seeking conflict with Russia.

Biden addressed the state of U.S.-Russia relations amid rising tensions following ransomware attacks that targeted critical infrastructure, including the Colonial Pipeline and a key meat supplier. The president will meet with Putin in Geneva, Switzerland later this month.

"We’re not seeking conflict with Russia," Biden said during a speech to military service members stationed in the United Kingdom. "We want a stable, predictable relationship. Our two nations share incredible responsibilities and among them, ensuring strategic stability and upholding arms control agreements."

"I take that responsibility seriously, but I’ve been clear – the United States will respond in a robust and meaningful way when the Russian government engages in harmful activities," he added.

BIDEN WARNS CLIMATE CHANGE IS ‘GREATEST THREAT’ TO US SECURITY 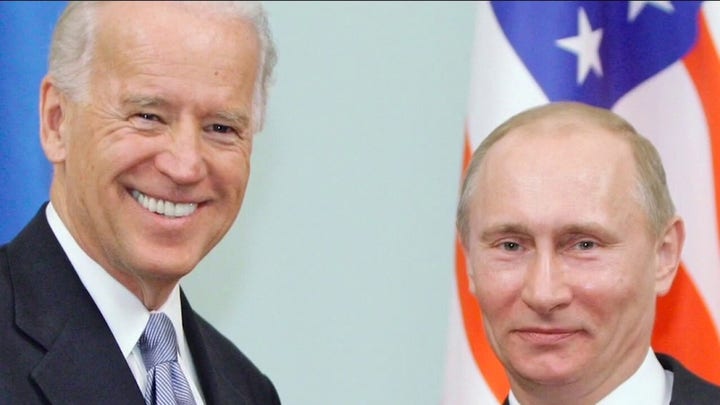 Biden is expected to press Putin on the recent ransomware attacks, both of which are believed to have been carried out by criminal organizations based in Russia. His administration previously imposed sanctions on Moscow over its role in the SolarWinds hack and efforts to interfere in the 2020 election, among other actions.

The president said he would meet with Putin "to let him know what I want him to know." Biden will meet with G7 leaders and NATO allies during his trip to Europe, which marks his first overseas travel since entering the White House.

Biden said his administration would coordinate with G7 allies to step up investments in "high quality, high standard physical, digital and health infrastructures." He also called for the establishment of international norms for activity in cyberspace.

"We have to make sure that new technologies and norms of conduct in cyberspace are established, including addressing the growing threat of ransomware attacks, that are governed by our democratic values, not by the autocrats who are letting it happen," Biden said. "These are all critical national security issues in 2021."