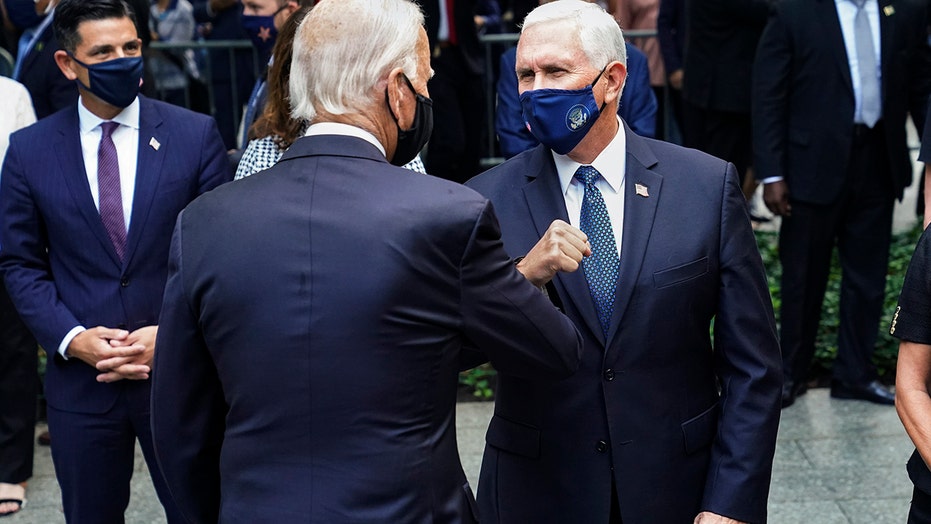 Joe Biden is expected to visit the 9/11 Memorial in Pennsylvania; Peter Doocy reports.

They may be rivals on the campaign trail, but as the nation marks the 19th year since the 9/11 terrorist attacks, Democratic presidential nominee Joe Biden and Vice President Mike Pence put politics aside.

The two briefly chatted and tapped elbows -- a common replacement for shaking hands amid the coronavirus pandemic -- as they both attended the annual memorial service at Ground Zero in New York City, at the site where more than 2,600 people died on Sept. 11, 2001, when two airliners hijacked by Al Qaeda terrorists slammed into the World Trade Center, collapsing the Twin Towers.

The former vice president and his wife, Jill Biden, were accompanied by New York Gov. Andrew Cuomo and Sen. Chuck Schumer of New York, the Senate Minority Leader, as they arrived at the National September 11 Memorial Plaza in lower Manhattan. As the traditional reading of the names of those killed when the Twin Towers collapsed got underway, Biden and Pence stood just a few feet apart. Former New York City Mayor Michael Bloomberg, a brief rival during the 2020 Democratic presidential primaries, also stood nearby and briefly greeted Biden.

Emphasizing the solemnity of the day, Biden told reporters as he was departing his home in Delaware for New York City that “I’m not going to make any news today. I’m not going to talk about anything other than 9/11. We took all our advertising down. It’s a solemn day. That’s how we’re going to keep it.”

“I’m not going to be holding a press conference,” he said before adding that he’ll “get back to the campaign tomorrow.”

By dropping his ads for the day, Biden was following in the footsteps of every presidential campaign of a major political party’s nominee dating back to the 2004 election cycle, which was the first White House race following 9/11.

The Trump campaign declined to answer when repeatedly asked on Thursday if they’d be dropping their ads for the day on 9/11. According to the ad-tracking firms Advertising Analytics and Medium Buying, Trump campaign ads were running on Friday.

Kristopher Purcell, who was working in the White House and the Oval Office on Sept. 11, 2001, and who's a co-founder of the anti-Trump GOP group ‘43 Alumni for Biden,’ told Fox News, “Donald Trump just doesn’t violate the basic norms that we’ve traditionally had in this country. He violates the basic decency of the country and of the office he holds. There’s a reason why on this day that we pause and remember the loss and remember what happened to our country.”

He called the running of ads on 9/11 by the Trump campaign “not surprising.”

While the vast majority of Biden ads appeared to be pulled down, however, some English and Spanish-language spots did end up running at least 18 times on local TV stations in Wisconsin, Minnesota, Pennsylvania and Florida. And some digtal spots also appeared online.

The Biden campaign told Fox News that "our clear intentions are to suspend advertising today. This was an inadvertent airing and we are reaching out to the affiliate stations for an explanation and to remedy."

During the New York City ceremony, Biden briefly comforted an elderly woman who sitting nearby using a wheelchair.

The woman -- who was holding a picture of her son -- told Biden her son was 43 when he died in the attacks. Biden, who momentarily took the image and looked it over, according to a pool report, reflected on the loss of his own son Beau, who died in 2015.

“It never goes away,” Biden said.

After spending 90 minutes at the memorial in New York City, Biden headed to the Flight 93 Memorial in Shanksville, Pa., the crash site of United Airlines Flight 93. The flight was one of the four hijacked by the terrorists, but the crew and passengers fought back against the hijackers. Forty victims died as the plane crashed into the Pennsylvania countryside about 60 miles southeast of Pittsburgh.

Biden place a wreath at the memorial's wall and met with the families of three of the victims from Flight 93.

The Bidens then stopped by the Shanksville Fire Department, bring cake and pastries and beer, which the former vice president had promised on his previous visit to the town.

President Trump spoke at the Shanksville memorial on Friday morning.

Pence, after his visit to the Ground Zero memorial, stopped by a nearby fire house that was the first in New York City to respond to the attack.

"My brother-in-law is a first responder in California," Harris told first responders at the ceremony. "I thank you for the sacrifice that you are prepared to make every day you walk out of your homes and the sacrifices your family makes when they bid you off as you go wearing that uniform."