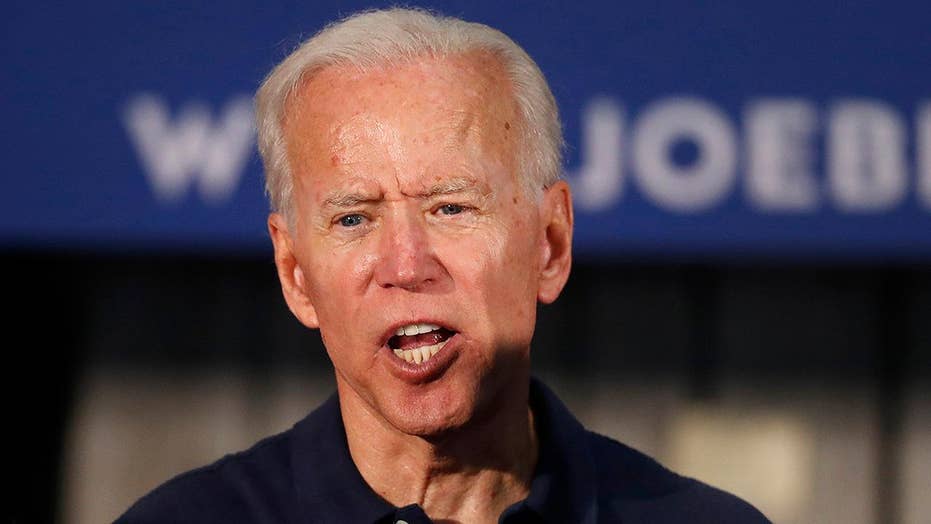 Campaign Trail Mix: Joe Biden rolls out expanded Obamacare plans; Beto O'Rourke reveals that he and his wife are both descended from slave owners.

"If you like your health care plan, you can keep it."

That familiar pledge, made repeatedly over several years by former President Barack Obama, was named the 2013 "Lie of the Year" by fact-checking website Politifact, as millions of individuals lost their private insurance -- and had to switch to costlier options -- due to changes mandated by the Affordable Care Act.

On Monday, Democratic presidential frontrunner Joe Biden unveiled his own health care plan, and issued a similar-sounding promise while speaking at a presidential forum sponsored by AARP in Des Moines, Iowa.

"I give people the option," Biden said, after dismissing his opponents' "Medicare-for-all" proposals, which would eliminate private health insurance entirely. "If you like your health care plan, your employer-based plan, you can keep it."

Biden has said his proposal would add a "public option," or government insurance plan, to existing exchanges that sell private insurance.

The "Medicare-like" plan that would be available to anyone — including the 150 million-plus Americans now covered by job-based insurance, a group now ineligible for exchange-based policies.

Biden has indicated that massive income-based subsidies would ensure that any household could get coverage through exchanges.

The idea is to expand coverage immediately and shake up insurance markets long-term by forcing private insurers to compete alongside the government, theoretically pressuring to lower their premiums and out-of-pocket costs for private policyholders.

In the main, Biden largely defended his boss' beleaguered, signature health care initiative. This weekend, he declared himself "against any Republican and any Democrat who wants to scrap" the Affordable Care Act.

"Here's the deal guys," Biden told Fox News in Iowa on Monday. "One of the things that's happening is, all of a sudden, the American public has figured out what ObamaCare's about. They understand it. ... It's the place from which to build."

The ACA, also known to many as ObamCare, however, has faced significant headwinds in the courts. One of the nation’s most conservative federal appeals courts heard opening arguments last Tuesday in a case that could determine the future of the Affordable Care Act, and seemed destined to make its way to the Supreme Court.

A three-judge panel of the 5th U.S. Circuit Court of Appeals in New Orleans heard arguments in Texas vs. the United States, which seeks to determine whether Congress effectively invalidated Obama's entire signature health care law when it zeroed out the tax imposed on those who chose not to buy insurance.

Without the mandate, conservatives have argued, the entire law must be stricken.

Speaking in New Hampshire, Biden countered, "We should not be scrapping ObamaCare, we should be building on it."

"I think one of the most significant things we've done in our administration is pass the Affordable Care Act," Biden said this weekend. "I don't know why we'd get rid of what in fact was working and move to something totally new. And so, there are differences."

He argued that some of his opponents, with the exception of Bernie Sanders, aren't fairly representing the consequences of their proposals.

"Bernie's been very honest about it," Biden said. "He said you're going to have to raise taxes on the middle class. He said it's going to end all private insurance. I mean, he's been straightforward about it. And he's making his case."

Asked specifically whether rival Kamala Harris has been honest about how her plan would affect private insurance, Biden said, "I'll let you guys make that judgment."

Sanders, meanwhile, hit back at Biden, clarifying that his plan would be a net financial benefit for most households: Their federal taxes would go up, but their private insurance premiums, deductibles and co-pays would be eliminated.

"At a time when Donald Trump and the health insurance industry are lying every day about 'Medicare-for-all,' I would hope that my fellow Democrats would not resort to misinformation about my legislation," Sanders said in a statement responding to Biden's New Hampshire comments.