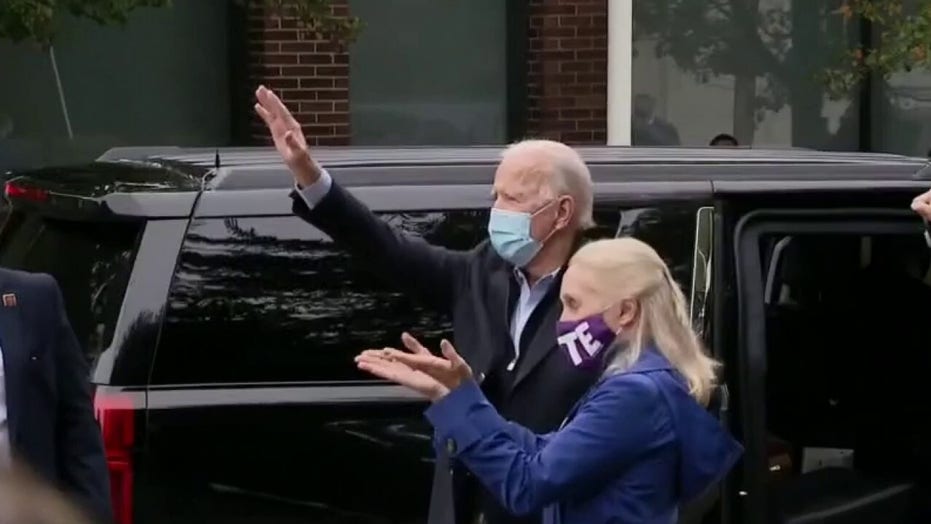 Fox News correspondent Peter Doocy has the latest from the Democratic campaign on 'Special Report.'<br>

With eight days to go until Election Day on Nov. 3, Democratic presidential nominee Joe Biden is confident he’ll win a trio of crucial swing states that President Trump flipped from blue to red four years ago.

The former vice president – taking questions from reporters during a last minute stop in the key battleground of Pennsylvania – pushed back against criticism that he’s not campaigning vigorously enough in the final stretch leading up to Election Day, saying that he’s “not overconfident.”

BIDEN PUSHES BACK ON TRUMP'S FRACKING ATTACKS IN PENNSYLVANIA

Biden – speaking with supporters at an voter service center in Chester, a short drive from his home in Wilmington, Delaware – took aim at Trump over the president’s handing of the coronavirus pandemic. And he criticized the president over his planned celebration at the White House Monday night following the Senate confirmation of his Supreme Court nominee Amy Coney Barrett. Biden called the outdoor event a “super spreader.”

Biden’s stop in Pennsylvania came as the president was holding multiple campaign rallies in the state.

Democrats had carried Pennsylvania in presidential elections for a quarter century before Trump four years ago outperformed the polls and won the state and its 20 electoral votes by a razor thin margin over 2016 Democratic nominee Hillary Clinton. Trump’s narrow victory in Pennsylvania as well as in Michigan and Wisconsin - two other states that Democrats had long carried and were also considered part of the ‘blue wall’ – helped boost him victory, handing him the White House.

THE 9 STATES THAT WILL LIKELY DECIDE THE PRESIDENTIAL ELECTION

But four years later, Biden has held a mid-single digit lead over Trump in Pennsylvania dating back to the begging of the general election campaign in the spring. A Fox News poll in the state released last week indicated Trump down 5 points to the former vice president.

Biden – who was born and spent his first decade in Scranton, Pennsylvania – and who was known as the state’s third senator during his nearly four decades representing neighboring Delaware in the Senate - told reporters “that blue wall has to be reestablished. With the grace of God and goodwill, I’m going to win Pennsylvania. It matters a great deal to me, personally and politically.”

Minutes earlier, he told supporters that “I feel good” but added “it’s not over till it’s over” and said ”we’ve got to run through the tape.”

While Biden currently has an upper single digit lead in an average of the national polls and the edge in many of the key battleground states, Trump has been crisscrossing the nation, holding multiple rallies per day. Biden’s in-person campaign schedule has been much less intense, as the candidate relies more on virtual outreach and is vastly outspending the president in the ad wars.

But Biden’s schedule appeared anything but frenetic in four days since the debate.

Biden said that he’s “not overconfident about anything. I want to make sure that we turn out every vote possible.” And he stressed that “there’s not been a day that hasn’t been a 12 hour day yet.”

The former vice president noted that he'll be campaigning in Florida, Georgia, Wisconsin, Iowa and potentially other states in the next few days.

But he's sticking to his game plan, which is aimed at ensuring the campaign spotlight continues to shine on Trump and that the election remains a referendum on the president's record on the coronavirus and the economy.

Biden also took aim at Trump, who continues to hold large rallies with a lack of social distancing and limited mask wearing by supporters, disregarding the warnings of public health experts and flouting numerous state restrictions amid the coronavirus pandemic.

“We’re going to be continuing to travel but the big difference between us, and the reason it looks like we’re not travelling, we’re not putting out super spreaders, we are doing what we’re doing here. Everybody’s wearing a mask and trying their best to be socially distanced,” Biden emphasized. 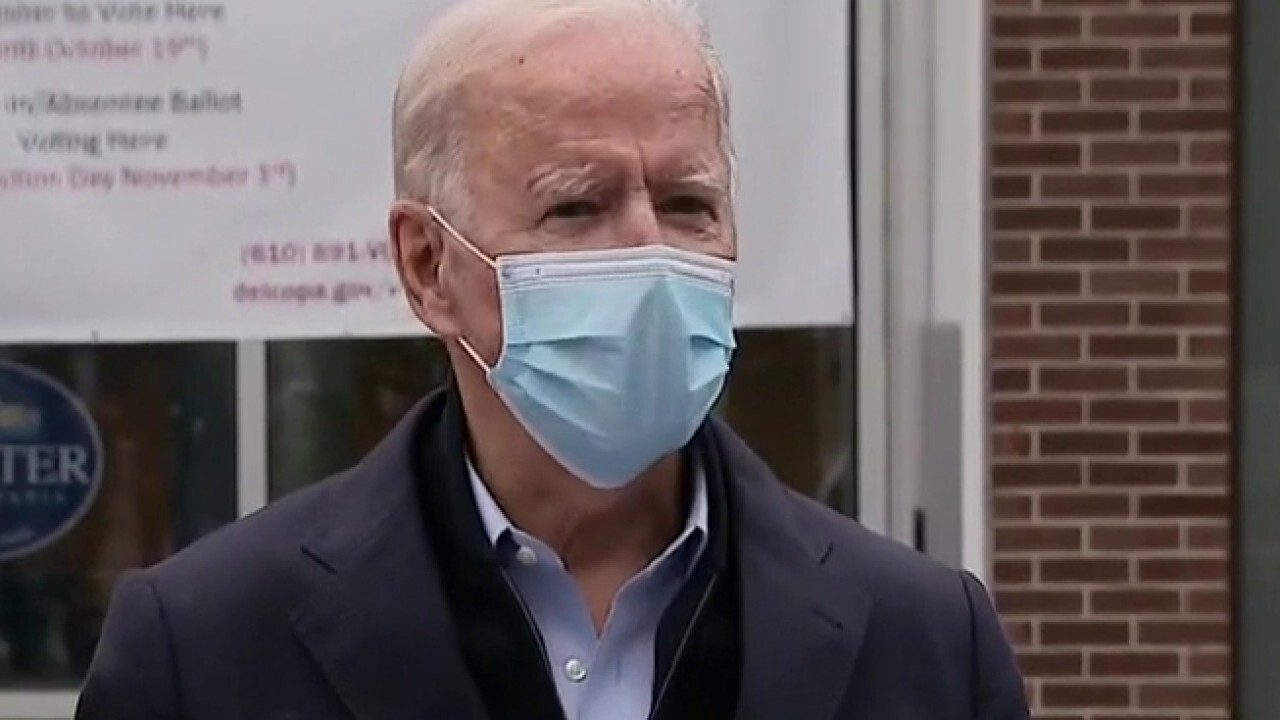 At least 11 people – including the president and First Lady Melania Trump – who attended last month’s White House Rose Garden announcement of the Barrett nomination were diagnosed with COVID-19. There was no social distancing and limited wearing of masks at the outdoor event.

“When president of the United States puts on these super spreader events,” Biden said, pointing to last month’s event. “I just hope he’s willing to have learned a lesson and that there will be significant social distancing.”

He added that “I don’t blame him (the president) for celebrating… but the fact is it’s just not appropriate now.”

Biden claimed that the president “waved the white flag” on the fight against the coronavirus.

As of Monday evening, there were over 8.6 million people infected with COVID-19, and at least 225,677 have died from the virus, in the United States.

And he spotlighted comments the president made Saturday at a rally in Wisconsin when Trump accused “doctors and hospitals" of inflating COVID-19 patient counts to "get more money.”

“What in the hell’s a matter with this man?" Biden asked. “Thousands of doctors and nurses have given their lives to save lives and he’s saying the reason they’re talking about testing is that they want to make more money. Mr. President, more than 1,000 health care workers have lost their lives fighting COVID.”