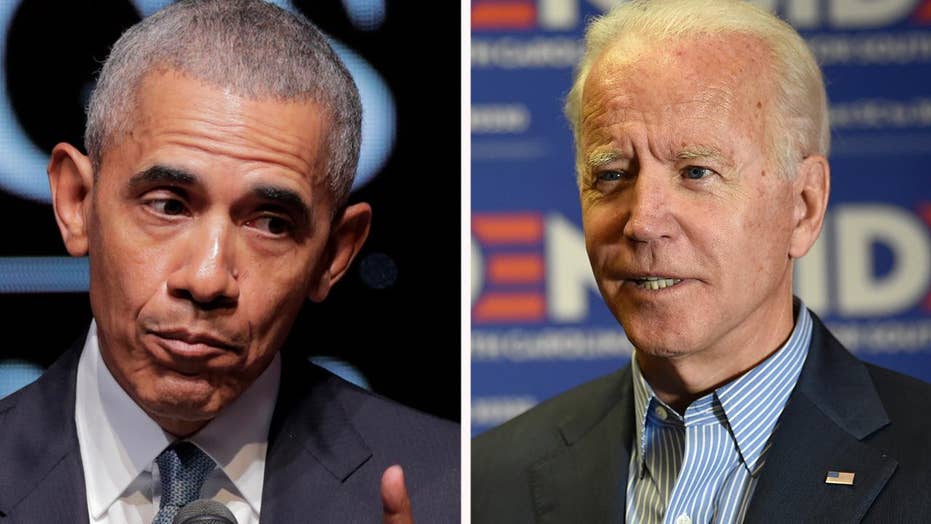 Biden claims he told Obama not to endorse him for president

DURHAM, N.H. – There’s a new warning sign for former Vice President Joe Biden in the state that holds the first primary in the race for the White House.

Biden, once the unrivaled front-runner in the race for the Democratic presidential nomination in most national polling and many early primary and caucus state surveys, now stands at 15 percent support among likely Democratic primary voters in New Hampshire, according to a new University of New Hampshire poll conducted for CNN.

That's a drop of 9 percentage points since the previous UNH/CNN survey, which was conducted in July.

WARREN OPENS UP 7-POINT EDGE OVER BIDEN IN NATIONAL POLL

Asked about the new poll, Biden told MSNBC on Tuesday that “polls, as you know, are up and down.”

The former vice president stated that he still planned on performing well in New Hampshire and the other early-voting states of Iowa, Nevada and South Carolina.

The survey indicates Sen. Bernie Sanders stands at 21 percent support, with progressive rival Elizabeth Warren at 18 percent. There’s no front-runner in the new poll, as Sanders’ 3 point edge over Warren is within the survey’s sampling error for likely Democratic primary voters. Both Sanders and Warren – who hail from the neighboring states of Vermont and Massachusetts, respectively – stood at 19 percent in the July survey, trailing Biden.

South Bend, Ind., Mayor Pete Buttigieg – at 10 percent – is the only other candidate in the still-large field of Democratic White House hopefuls to crack double digits. His numbers are unchanged from the summer survey.

The new poll was conducted Oct. 21-27, entirely after the fourth round Democratic presidential nomination debate.

The survey indicates Sen. Amy Klobuchar of Minnesota, Rep. Tulsi Gabbard of Hawaii and tech entrepreneur Andrew Yang are tied at 5 percent support, with each gaining support from the summer survey. Sen. Kamala Harris of California and billionaire businessman and environmental and progressive advocate Tom Steyer are each at 3 percent. Sen. Cory Booker of New Jersey and former Rep. Beto O’Rourke of Texas register at 2 percent, with everyone else at 1 percent or less.

New Hampshire presidential primary voters are traditionally late deciders, which is reflected in the survey. With three-and-a-half months to go until the February contest, only 23 percent said they’ve definitely decided on which candidate they’ll support. Just over one in five said they’re leaning toward a candidate, with a whopping 57 percent saying they remain undecided.

Biden – who returns to New Hampshire at the end of next week to formally file to place his name on the primary ballot – still leads when it comes to electability. Thirty-six percent of those questioned say he has the best chance of any Democratic White House hopeful of beating President Trump in next year’s general election. But that’s down from 45 percent in July. And in the new survey, the former vice president grabs just 20 percent support among his core groups — voters 50 and older, and self-described moderates and conservatives.

Even though he’s visited the Granite State nearly every week since launching his long-shot primary challenge in April, former Massachusetts Gov. Bill Weld stood at just 5 percent. But he’s ahead of the two other Republican presidential primary long shots. Both former South Carolina governor and congressman Mark Sanford and former conservative radio talk show host and one-term congressman from Illinois Joe Walsh are each at just 1 percent in the poll.

The UNH/CNN poll was conducted using live telephone operators, who questioned 574 likely Democratic primary voters in New Hampshire. The margin of error for Democratic primary questions is plus or minus 4.1 percentage points. Four-hundred-and-sixty-one likely GOP primary voters were also questioned, with a sampling error of plus or minus 4.6 percentage points.