Biden aims to regain momentum as he focuses on rural Iowa

AMES, Iowa -- Former Vice President Joe Biden is a few days away from wrapping up an eight-day bus tour in Iowa, his longest stretch in the Hawkeye State to date. The 18-county trip across rural Iowa comes as the campaign attempts to regain momentum with less than two months to go before the first-in-the-nation caucus.

The tour, dubbed “No Malarkey,” was aptly named, according to Biden.

“The reason we named it ‘No Malarkey’ is because the other guy is all lies,” Biden said during the trip’s kickoff on Saturday in Council Bluffs. 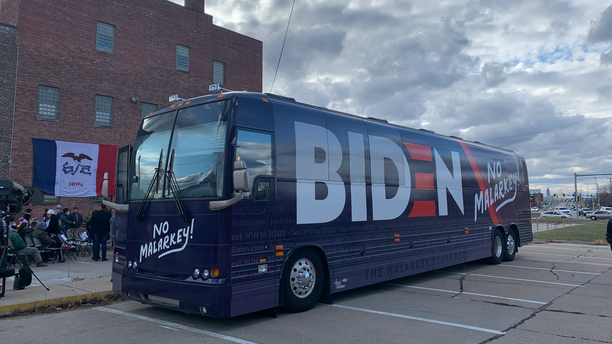 Biden has been straightforward about the purpose of his tour. It comes as he lags third or fourth in Iowa polls, behind Mayor Pete Buttigieg and Senator Elizabeth Warren, despite his national lead.

Biden tailored his “No Malarkey” pitch to voters in counties that President Trump won in 2016, hoping to capture them. In his stump speeches, he often stressed the importance of rebuilding the middle class in rural America and touted his experience as a key strength of his candidacy.

The latter drew Barb Wagner’s support after she saw him speak at a campaign event in Storm Lake.

“He’s just so honest and a good person. I think he can beat Trump. We have to do that,” said Wagner, who previously considered voting for Buttigieg, mayor of South Bend, Ind. 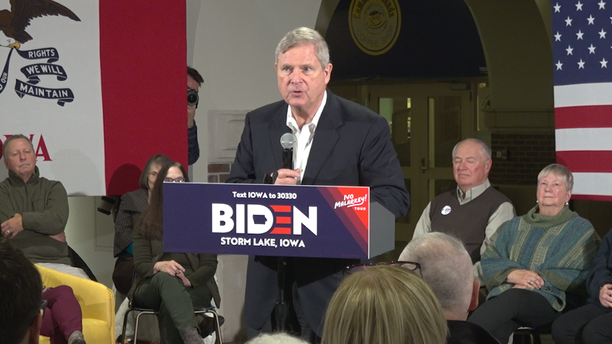 Another voter, Les Lewis, said he made up his mind after going to Biden’s meet-and-greet in Carroll. He said his friends’ feedback helped him make a decision.

“Some of them went to see him last night in Denision, and I’ve gotten feedback from them that they are making up their minds to support him,” Lewis said.

Former Iowa governor and Secretary of Agriculture Tom Vilsack and his wife, Christie, joined Biden on the first few days of the tour. The Vilsacks committed to Biden last month, a crucial endorsement in the state where they remain popular among Democrats.

“There is no one in this field, on any side, any party, that has as much experience and knowledge and the relationships with foreign leaders that Joe Biden has. He literally can start for the first minute of the first day of his administration repairing the credibility and respect of the United States,” Vilsack said in Carroll.

Former Secretary of State John Kerry also endorsed Biden on Thursday. Kerry will join the former vice president as he campaigns in Iowa on Friday.

“I believe Joe Biden is the President our country desperately needs right now, not because I’ve known Joe so long, but because I know Joe so well," Kerry said in a statement released by the Biden campaign. "I’ve never before seen the world more in need of someone who on day one can begin the incredibly hard work of putting back together the world Donald Trump has smashed apart." 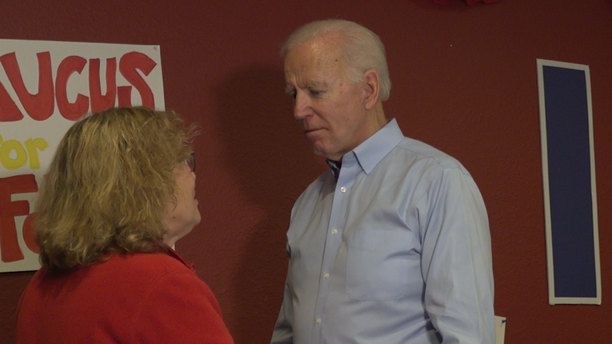 Biden rarely took questions while delivering remarks, choosing instead to speak with voters one on one at the end of each event.

The crowds were still visibly smaller than those at Warren’s and Buttigieg’s respective events in Iowa. On the other hand, supporters said Biden’s ability to connect with voters personally is one of his biggest appeals. He spoke to voters one-on-one after each event. In one instance, he called someone’s mother to thank her for her service as a WWII Army nurse.

“I know it drives the staff crazy because I like to spend time with folks, I have trouble walking away from them,” Biden said.

Biden said they’ve long-planned to do the bus tour after Thanksgiving when Iowans really begin to make focused assessments of the candidates. He said Iowans make their decisions late. In fact, several attendees said they remain undecided.

The caucus may be less than 60 days away. But, for some voters, that just means there’s still time.

“If someone really rings through, I would come out and endorse them. But, right now, I’m just not there yet,” said Jared Beymer, mayor of Denison, who said he’ll likely make a decision on caucus night.