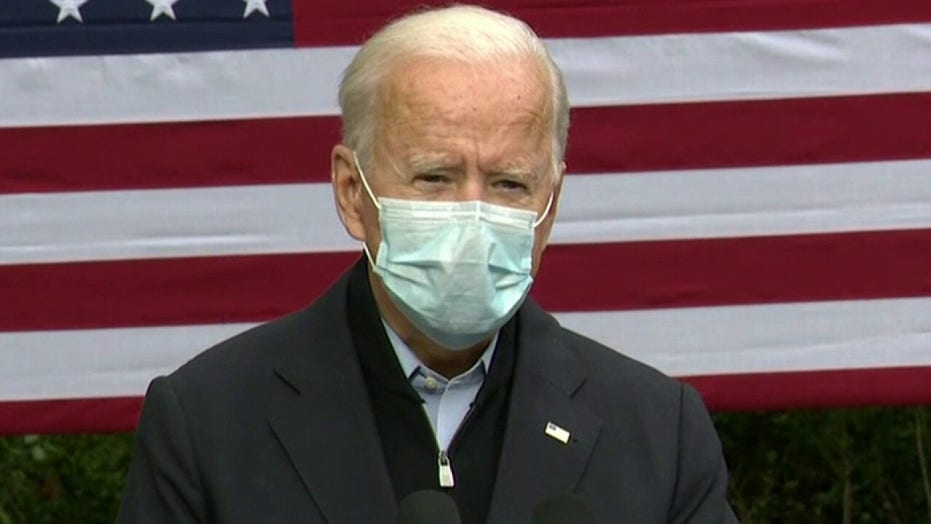 Former Vice President Joe Biden weighs in on President Trump's COVID-19 diagnosis and the importance of following the science when dealing with the virus.

The former vice president, addressing a union audience in Michigan on Friday afternoon, stressed that battling the coronavirus pandemic is an “American moment” rather than a “partisan moment.” And he emphasized that Trump’s testing positive for the coronavirus “is a bracing reminder to all of us that we have to take this virus seriously. It’s not going away automatically….The news is a reminder that we as a nation need to do better in dealing with this pandemic.”

Biden shared the stage with the president on Tuesday night, as the candidates stood eight feet apart as they faced off in the first of three scheduled presidential debates. Biden and his wife Jill Biden were tested for the coronavirus Friday morning. And Biden’s trip to the crucial general election battleground state was delayed a couple of hours until word that both he and his wife had tested negative for COVID-19.

Repeating his statement and tweet from earlier in the day, Biden started his comments by “sending my prayers for the health and safety of the first lady and the president of the United States after they tested positive for COVID-19. My wife Jill and I pray that they’ll make a quick and full recovery.”

Biden emphasized that “this is not a matter of politics. It’s a bracing reminder to all of us that we have to take this virus seriously. It’s not going away automatically. We have to do our part to be responsible. That means following the science. Listening to the experts. Washing our hands. Social distancing.”

The former vice president’s comments come three days after Trump – who avoided wearing a mask in public until July and who continues to resist any forceful urging of Americans to wear masks - once again mocked Biden for wearing a mask, saying at the debate that “I don’t wear a mask like him. Every time you see him, he’s got a mask. He could be speaking 200 feet away from him and he shows up with the biggest mask I’ve ever seen.”

Biden – who’s called for mask mandates across the country - emphasized in his comments at the United Food and Commercial Workers Local 951 in Grand Rapids, Michigan, that “it means wearing a mask in public. It means encouraging others to do so as well. It means having mandates nationwide.”

And he urged Americans to “be patriotic. It’s not about being a tough guy. It’s about doing your part. Wearing a mask is not only going to protect you, but it also protects those around you. Your mom, your dad, your brother, sister, husband, wife, neighbor, co-worker. Don’t just do it for yourself.”

He also once again pointed to recent comments from the director of Centers for Disease Control and Prevention calling masks “the most important powerful public health tool that we have and spotlighted that University of Washington scientists have estimated that if everyone wears a mask over the next 100 days, 100,000 American lives may be saved.

Biden also highlighted that “the seriousness of this virus also underscores that we need regular testing with results turned around rapidly and that’s available to everyone….We need transparency. Those who test positive need to participate in contact tracing so everyone who they may have exposed can get tested themselves. That’s how you stop transmission for any epidemic.”

The president’s testing positive for COVID-19 thrusts the presidential election spotlight firmly back on the pandemic, which began sweeping the nation in February and March. Last week the country passed a grim milestone, as more than 208,000 COVID-19-related deaths have now been recorded. More than 7.3 million infections have been confirmed across the country.

Over the past seven months, Biden has criticized the president – charging Trump initially downplayed the severity of the outbreak – and for botching the federal government’s response. At Tuesday’s debate, Biden charged that “the president has no plan. He hasn’t laid out anything. … He panicked.”

Trump and his campaign have pushed back on such criticism, citing among other things the administration's early effort to restrict air travel with China, where the pandemic originated. And they’ve spotlighted what they claim are their successes with testing and proving personal protective equipment. “We got the gowns. We got the masks. We made the ventilators,” the president touted during the debate.