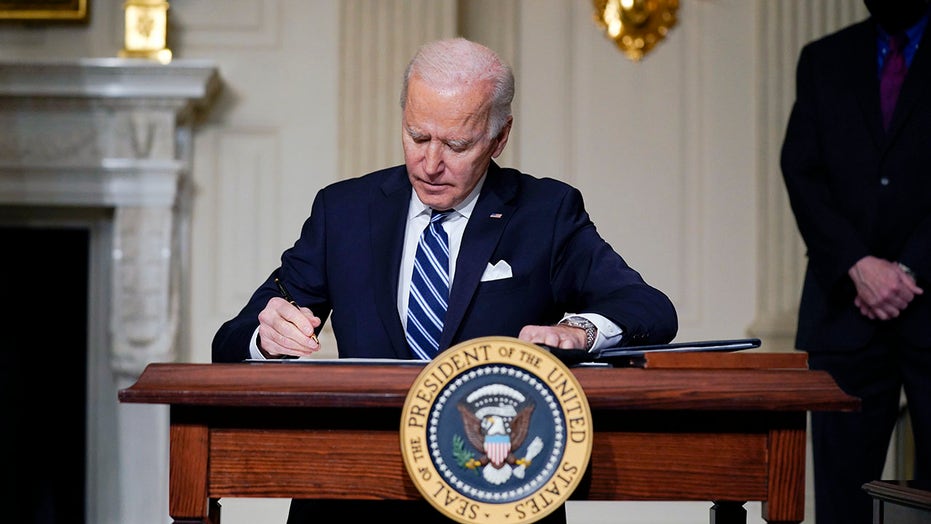 President Biden on Thursday signed the bill making Juneteenth, a day celebrating the freeing of Black slaves after the Civil War, into a national holiday.

Biden said the day would now be a "day in which we remember the moral stain and terrible toll slavery took on the country," as he signed the bill surrounded by members of the Congressional Black Caucus and Vice President Harris.

He again turned back to new voting reforms put in place by GOP-led states, saying the promise of equality would not be fulfilled "so long as the sacred right to vote remains under attack." The room erupted in applause.

"We see this assault from restrictive laws, threats of intimidation, voter purges and more."

"The promise of equality will not be fulfilled until it becomes real in our schools, on our streets and in our neighborhoods, in the water that comes out of our faucets, the air that we breathe in our communities and in our justice system," the president continued.

Biden said the nation would continue to work to root out hate, which he said "never ends" but "only hides."

"In short, this day doesn't just celebrate the past, it calls for action today," Biden said.

The Juneteenth bill passed the Senate unanimously and saw opposition from 14 House Republican lawmakers when it came for a vote Wednesday evening.

"There's nothing more powerful than an idea whose time has come. And it seems to me that this is the most propitious time for us to recognize our history and to learn from it," Sen. John Cornyn, R-Texas, said before the House vote Wednesday. Juneteenth is already a state-designated holiday in Texas.

"Slavery was a blemish upon our country from its earliest days, and it is a part of our nation’s history that must not be ignored or swept under the rug," House Majority Leader Steny Hoyer, D-Md., said in a statement after the House quickly passed the Senate's bill. "Juneteenth is an opportunity to remember with solemnity all those who endured enslavement and the trauma still felt by their families and communities to this day, as well as an opportunity to pay tribute to all brave individuals who worked for abolition and emancipation."

Juneteenth is the anniversary of when Union Maj. Gen. Gordon Granger, two years after the Emancipation Proclamation, arrived in Galveston, Texas, to declare that the Civil War was over and that slaves must be freed. Slavery ended in other southern states before that but because of how far Texas was from the Union's power center around Washington, D.C., and the Northeast, there were not enough Union soldiers to enforce Lincoln's order.

Texas first made Juneteenth an official holiday in 1980, and most states eventually followed with at least some form of Juneteenth observance.

Members of the parade perform during the 48th Annual Juneteenth Day Festival on June 19, 2019 in Milwaukee, Wis. (Dylan Buell/Getty Images for VIBE)

Roy, who recently ran for House Republican Conference chair, said his problem with the bill was related to semantics.

"Juneteenth should be commemorated as the expression of the realization of the end of slavery in the United States - and I commend those who worked for its passage," Roy said. "I could not vote for this bill, however, because the holiday should not be called 'Juneteenth National Independence Day' but rather, ‘Juneteenth National Emancipation [or Freedom or otherwise] Day.’"

He continued: "This name needlessly divides our nation on a matter that should instead bring us together by creating a separate Independence Day based on the color of one’s skin."

Brooks, meanwhile, said that the end of slavery "ought to be celebrated as much as the 4th of July," according to AL.com. But he said the date should be the anniversary of the Emancipation Proclamation or perhaps the 13th Amendment to the Constitution, which officially banned slavery, rather than June 19 because of its roots specifically in Texas.

Gosar, meanwhile, decried Juneteenth as an effort "to divide this country."

"Juneteenth is more debunked Critical Race Theory in action. I reject racism. I reject the racial division people are promoting. I voted no because this proposed holiday does not bring us together, it tears us apart," he added. "I cannot support efforts that furthers racial divisions in this country. We have one Independence Day, and it applies equally to all people of all races."

Rosendale alleged that the bill "is an effort by the Left to create a day out of whole cloth to celebrate identity politics as part of its larger efforts to make Critical Race Theory the reigning ideology of our country."

"Since I believe in treating everyone equally, regardless of race, and that we should be focused on what unites us rather than our differences, I will vote no," Rosendale added.