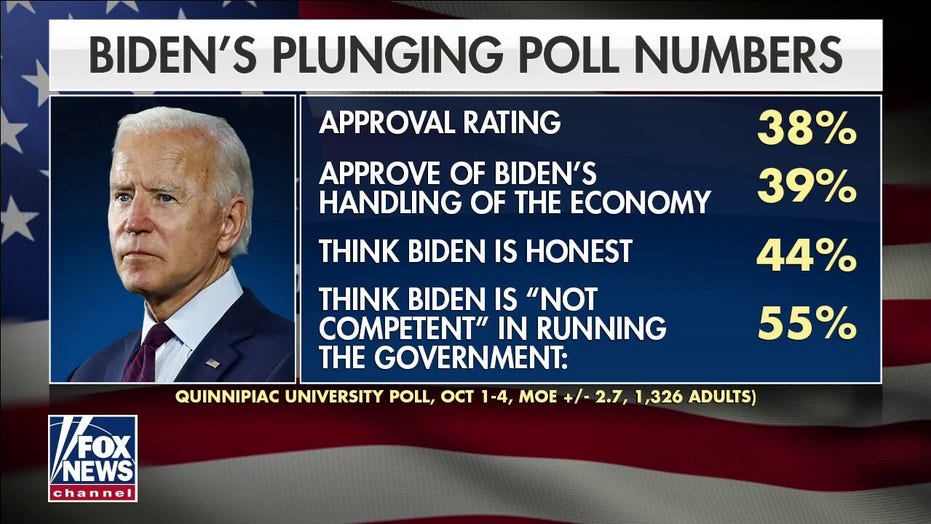 President Biden’s standing among Americans keeps sinking, according to a new national poll.

The president received negative scores in the double digits on all but one key issue asked in the new poll, which was conducted Oct. 1-4. And a majority of those surveyed said the Biden administration is not competent in running the federal government.

BIDEN APPROVAL RATINGS DRAGGED DOWN BY PLUNGE IN SUPPORT AMONG INDEPENDENTS

"Battered on trust, doubted on leadership, and challenged on overall competency, President Biden is being hammered on all sides as his approval rating continues its downward slide to a number not seen since the tough scrutiny of the Trump administration," Quinnipiac University polling analyst Tim Malloy said.

Biden’s approval rating hovered in the low-to-mid-50s during his first six months in the White House. But the president’s numbers started sagging in August, in the wake of Biden's much criticized handling of the turbulent U.S. exit from Afghanistan, and following a surge in COVID cases this summer among mainly unvaccinated people due to the spread of the highly infectious delta variant, as the nation continues to combat the coronavirus, the worst pandemic to strike the globe in a century. The plunge in the president’s approval was also compounded by the latest surge of migrants trying to cross into the U.S. along the southern border with Mexico.

The president stands at 45% approval and 49% disapproval in an average of all the most recent polls compiled by Real Clear Politics.

Biden registers at 48%-50% approval/disapproval on handling the pandemic, according to the Quinnipiac University survey. The president is at 39%-55% on handling the economy, 37%-58% on his job as commander in chief, 34%-58% on foreign policy, and 23%-67% on dealing with the situation at the U.S.-Mexican border.

When it comes to the president’s personal traits, those surveyed were divided on whether he cares about average Americans, 44% said he’s honest while half said he’s not, and just 41% said he has good leadership skills, down from 52% in April. By a 55%-42% margin, Americans said the Biden administration’s not competent in running the government.

The presidential approval rating has long been a much-watched barometer of a president's clout and how well his party may perform in the ensuing midterm elections. Democrats will be defending their razor-thin majorities in the House and Senate in next year's midterms.

Then-President Trump’s negative approval ratings fueled the wave by Democrats in the 2018 midterms that helped them convincingly win back the majority in the House of Representatives. Republicans now see Biden’s flagging numbers as a precursor to what they hope will be a GOP rout in the 2022 midterms that will allow them to reclaim both the House and Senate majorities.

Quinnipiac University questioned 1,326 adults nationwide for their poll. The survey’s overall sampling error is plus or minus 2.7 percentage points.