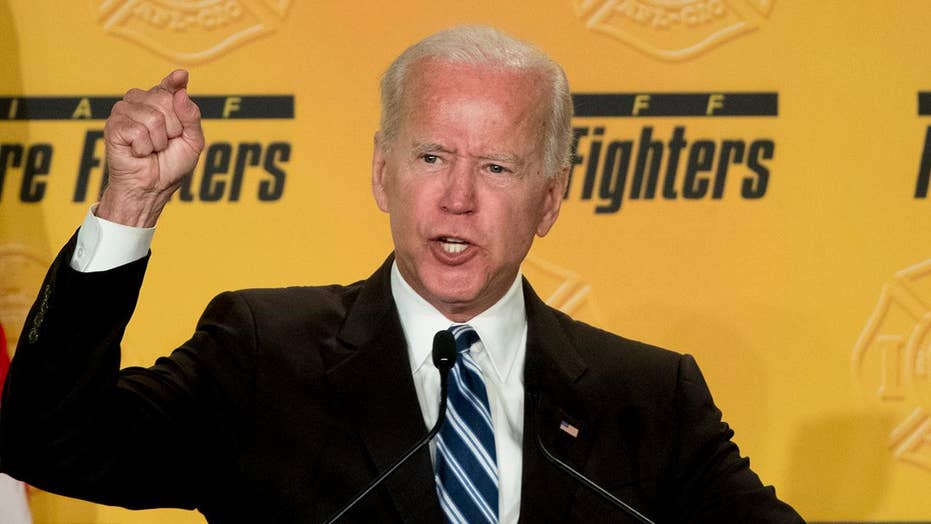 Joe Biden accused of kissing woman without her consent

Nevada lieutenant governor candidate Lucy Flores alleged in an article Friday that Biden "plant[ed] a big slow kiss on the back of my head." In a statement shortly afterward, a Biden spokesperson denied that the vice president or his staff had been aware that Flores was uncomfortable.

Biden added: "I may not recall these moments the same way, and I may be surprised at what I hear. But we have arrived at an important time when women feel they can and should relate their experiences, and men should pay attention. And I will.

WHY ARE CNN, MSNBC IGNORING MISCONDUCT ALLEGATIONS AGAINST BIDEN?

"I will also remain the strongest advocate I can be for the rights of women," he continued. "I will fight to build on the work I’ve done in my career to end violence against women and ensure women are treated with the equality they deserve. I will continue to surround myself with trusted women advisers who challenge me to see different perspectives than my own. And I will continue to speak out on these vitally important issues where there is much more progress to be made and crucial fights that must be waged and won.”

Speaking to CNN's "State of the Union" on Sunday following Biden's statement, Flores remarked, "I'm glad that he's willing to listen. ... If he is saying he never believed that was inappropriate, then frankly I believe that's a little bit of a disconnection. And ... a sense of not being aware."

The episode has led to a flood of pictures showing Biden with various women at campaign events and other administration functions surfacing on social media.

A Vox.com piece published on Friday titled, "Lucy Flores isn’t alone. Joe Biden’s got a long history of touching women inappropriately" catalogued several alleged episodes of misconduct by the former vice president, and asserted that "the media gave Biden a pass for years. It won’t in 2020."

"Biden’s been caught on camera embracing a female reporter from behind and gripping her above her waist, just below her bust," Laura McGann wrote in the article. "At a swearing-in ceremony for Defense Secretary Ash Carter, Biden put his hands on the shoulders of Stephanie Carter, Carter’s wife, and then leaned in and whispered into her ear. (He’s whispered into many women’s ears.) He’s also touched women’s faces and necks during other photo-ops. Once at a swearing-in ceremony for a US senator, he held the upper arm of the senator’s preteen daughter, leaned down and whispered into her ear, as she became visibly uncomfortable. Then he kissed the side of her forehead, a gesture that made the girl flinch."

Speaking to "Fox News Sunday," White House adviser Kellyanne Conway told host Chris Wallace: "First of all, this woman Lucy is very bold to come forward, and I would remind the audience that she shares Joe Biden’s political party. He was there to help to Democratic Party of Nevada, and her candidacy, so it’s quite bold for her to go up against the highest levels of her own political party."

Conway continued: If anybody just types in ‘Creepy Uncle Joe Videos,’ you come up with a treasure trove of far more evidentiary information and videos than we saw when Brett Kavanaugh's nomination was trying to be derailed ... and his family being destroyed by folks who had no evidence of what had allegedly happened 34 years earlier. I think Joe Biden has a big problem here, because he calls it affection and handshakes -- his party calls it completely inappropriate."

Meanwhile, several other Democratic 2020 presidential hopefuls -- including Bernie Sanders, Kamala Harris and Kirsten Gillibrand -- are also defending their self-professed commitment to the ideals of the #MeToo movement against a series of accusations they recently mismanaged sexual-misconduct claims against their subordinates.